Jorge Masvidal On Nate Diaz Fight: Let’s Give Fans The Fight They Want 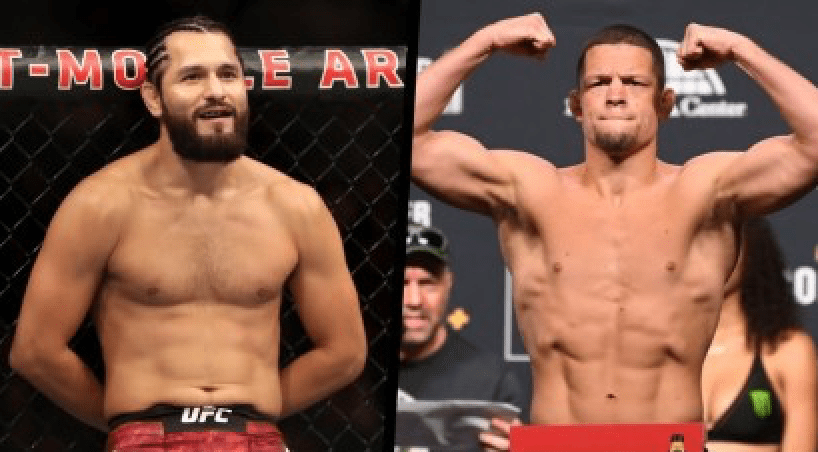 “Who wouldn’t want to see that fight?” That was UFC president Dana White’s response to Nate Diaz calling out Jorge Masvidal at UFC 241, following his impressive win over Anthony Pettis. And Dana isn’t wrong.

I personally have been calling for Masvidal to fight Leon Edwards next, since Edwards dominated Rafael dos Anjos at UFC San Antonio last month and after Dana confirmed that Colby Covington would be getting the next shot at Kamaru Usman’s welterweight title. I’d love to see that matchup with the winner facing the winner of Usman and Covington. I think that’s the fight to make for the sanctity of UFC welterweight division.

However, if Masvidal and Nate are booked next, well, you can take my money now. The fight, the build up, the hype, would be a dream for any UFC fan.

Even before Nate’s call out, Masvidal has already said that he would accept a fight with the younger Diaz brother in a heartbeat. Since the call out, ‘Gamebred’ has reiterated the fact that he’s 100% on board with the fight.

“We’re ready for this fight, man. We’re ready. We’re just negotiating it now. And let’s give the fans a fight they want to see, two dogs locked in the cage, going for the jugular. You know, I could get hit with a baseball bat, it don’t mean nothing. And same thing with my rival, you can hit that dude with a f***ing baseball bat to the kneecaps, he’s just gonna keep on coming. It’s a fight that the fans want and they’re gonna get, man.”

Speaking on The Ariel Helwani Show (as transcribed by MMA Fighting), Masvidal’s manager Abe Kawa, said a fight between his man and Nate would be like Christmas for fight fans.

“I believe that’s a good fight, I think both of these guys will go on, put on a show for everybody and I think that’s what we all want. I’m a fight fan at heart, before everything else and if you’re a fight fan, this is like Christmas for everybody.

“Right after the fight, I had a brief conversation with the higher-ups and it looks like they like the fight. That being said, we should be getting together sometime this week to see how that goes.”

When asked when he thinks the fight could happen, Kawa said he believes it will happen in December. And probably on the UFC 245 card in Las Vegas.

“I think December in Vegas is probably where he would prefer it. Actually, he wants to go to Cali where Nate’s from. I don’t want to give too much, I’d rather it come from Jorge than me, so I’ll try to keep it as simple as possible. But he looks at this fight more like the [Darren] Till [fight]; he’s gonna go into someone else’s backyard and he prefers that over anything else. So if Vegas is the closest thing he could get to Cali, then, you know, Vegas.

“The East Coast swag is different than the West Coast swag. We had Biggie and Tupac, and now we have Nate and Jorge.”

Nate’s win over Pettis this past weekend was his first time competing since his rematch with Conor McGregor at UFC 202, exactly three years ago yesterday. Sine Nate last fought, Masvidal has fought six times, going 4-2. The 34 year old has fought twice already in 2019, scoring spectacular knockouts in both, over Darren Till and Ben Askren.

How excited are you for this potential matchup between Jorge Masvidal and Nate Diaz?