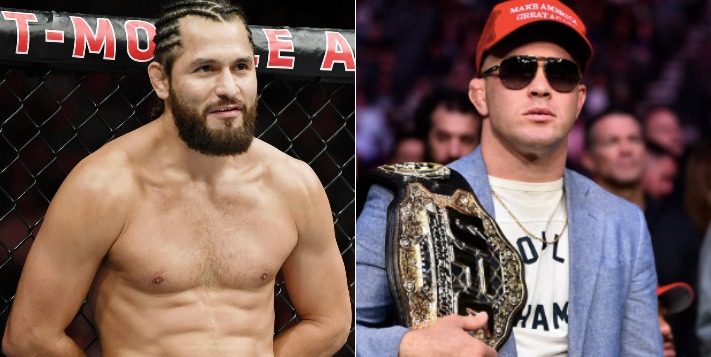 2019 will forever be a year to remember for Jorge Masvidal. Having not fought in 2018 and entering the year on a two fight losing streak, ‘Gamebred’ finished the year will three spectacular wins under his belt, the winner of Ariel Helwani’s fighter of the year, and the holder of the BMF title. But while his year inside the UFC Octagon couldn’t have gone any better, outside of it, his longterm friendship with Colby Covington came to an end.

It was at UFC 241 last August, when we first noticed the signs that all was not great between the two American Top Team fighters. Firstly, during the event, Covington was seen sitting closer to Ali Abdelaziz than he was to Masvidal.

And then during the post fight press conference, UFC president Dana White told the media that all the fighters Octagon side, were trying to start a fight with Covington.

“Everybody in that section kept fighting with Colby,” Dana stated. “So security kept coming over to me fifty times to get him out of there. And I said, ‘No, everybody needs to start acting like f***ing professionals because I don’t have another seat in this entire building’.

“That f***ing game you play in kindergarten was going on over there when I went over there. So I asked those guys, listen to me ‘We’ve got a big night going on here. We have a big fight. I don’t need a fight breaking out with you knuckleheads. Stop it.’”

Masvidal has now opened up about the incident at UFC 241. Speaking to Submission Radio ahead of UFC 246 (as transcribed by BJPenn.com), the 35 year old recalled the altercation with Covington.

“Dana definitely did have a talk with me. I mean, [Tyron] Woodley was a witness to it, my manager was a witness to it. There was rumours. Max Holloway was right next to me. And I see Colby there, and he’s been talking s*** already for months online about me, about teammates. I go, ‘Hey, let’s talk like men, address me like a man.’ Mind you, he had just said that he called me and told me, hey, do a flying knee for the Ben Askren fight. Then when we start fighting he said we haven’t talked in two years. The guy’s just a habitual liar, and I’d love to just put it out there now.

“So, he hasn’t talked to me in about a year and a half, though he’s telling everyone he just talked to me to give that Ben Askren thing. And, then you’re saying all this stupid s***. I go, ‘Hey, let me talk to you, man.’ He goes, ‘man, be a professional’, and he turns around. I go, ‘Yo, let me f***ing talk to you, stop talking shit online, I can’t hear nothing, let’s go outside and talk.’ And he said, ‘That’s cool bro, I’m a f***ing pro. I’m not going to be doing that,’ and he just kind of turned his back and starts kind of walking away, like, gets a little further for me. I said, alright, whatever.”

It was at this point that Masvidal said that Dana came over, warning him to leave Covington alone.

Would you like to see Jorge Masvidal and Colby Covington settle their differences inside the UFC Octagon?