Joseph Benavidez On His ‘Compromised’ Friendship With TJ Dillashaw 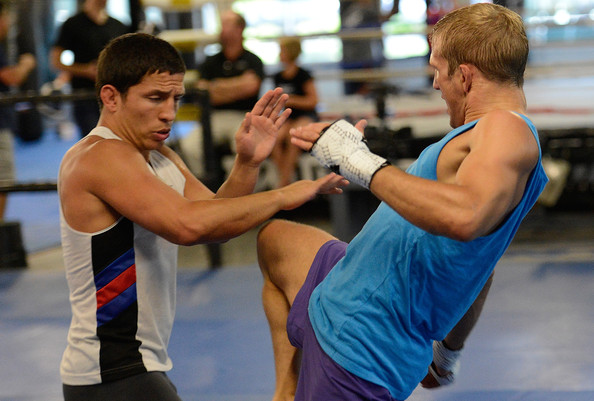 Joseph Benavidez opened up about his rocky relationship with the UFC Bantamweight Champion.

The narrative has quickly changed in the UFC. From the flyweight division shutting down, to the new flyweight champion looking to defeat the bantamweight kingpin, it feels like the super-fight everyone wanted to see is happening, albeit with different characters.

Dillashaw and Henry Cejudo do not really care too much about the specifics regarding the future of 125 pound division. If TJ defeats Cejudo, Dana White will likely wipe the flyweight division off the map. However, if Cejudo defeats Dillashaw, the consequences might be the same, but with Cejudo now likely moving up a weight class for his next fight.

One man that really isn’t thrilled with the equation is UFC flyweight contender Joseph Benavidez. The former title challenger has been a mainstay in the UFC, and while he and Dillashaw go a long way back, Joe admitted recently that his relationship with TJ is strained.

“It’s easy to say you’re a friend and this guy’s a friend, and this guy’s a friend of mine, but it’s more like… To act like a friend, you know what I mean? Kinda like actions and words and stuff like that so… I wouldn’t say he acts like the best friend. But we have a history so we go back and there is friends that are just like, alright, well… You get annoyed each other or whatever for a while so I guess he was never a good friend but we were teammates and we had gone through a ton together so I think that brings him close. But other than that…

“I think some of the stuff he said like about the [flyweight] division and stuff, that’s when I was kinda like, questioning it. I was like, ‘That’s cool, you’re really going down and doing something for yourself and getting two belts, that’s amazing,’ TJ has an amazing drive and he’s at where he’s at because of that drive. But it’s like, you also have ‘friends’, me and other people included in the division you’re saying you wanna shut down. So that was kind of more when I started to question it.

“Him dropping down and all that stuff didn’t make me question a friendship at all, it was just like, I would never stop someone from achieving their goals but trying to go out and take things away from people while doing it is kinda like… ‘Oh,’ Well, that made me more question our friendship.”

Joseph Benavidez will be taking on Dustin Ortiz in a rematch at UFC Brooklyn this weekend, while the card will be headlined by the super-fight between Henry Cejudo and TJ Dillashaw for the UFC Flyweight Championship.