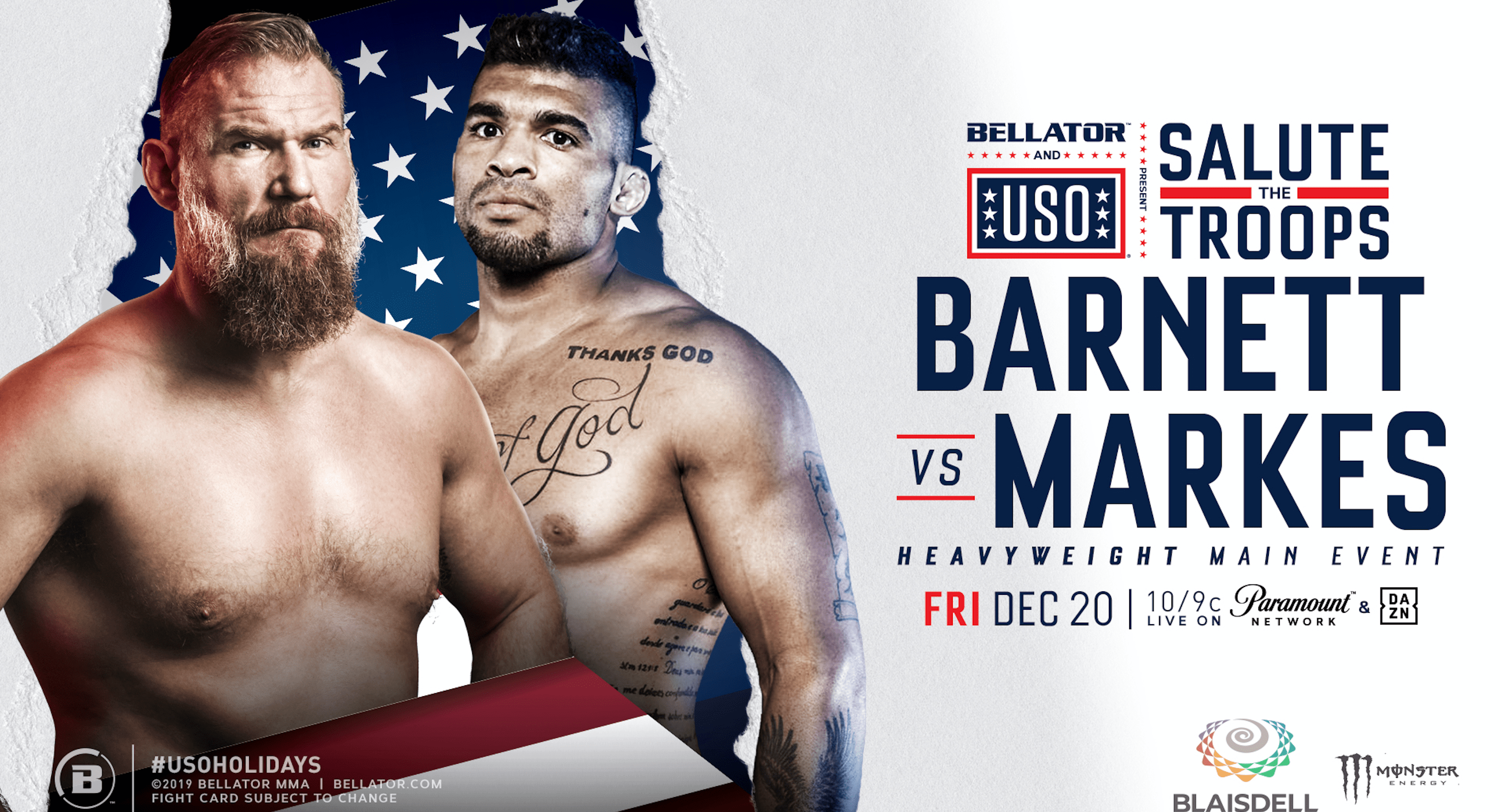 To honour the brave men and women of the U.S. Armed Forces, Bellator MMA has once again partnered with the USO to present a special live event free for the troops, along with their friends and families, on Friday, December 20th. Emanating from Neal S. Blaisdell Arena in Honolulu, Hawaii, this unique show will be headlined by a heavyweight bout featuring the Bellator debuts of “The Warmaster” Josh Barnett (35-8) and Ronny Markes (19-7).

For a second year, the USO and Bellator team up to honour the men and women who fight for our freedom and to bring entertainment and a piece of home to service members based in Hawaii during the holiday season. This Bellator Salute the Troops event will bring Bellator athletes and personalities to the military community and provide a live free event as a thank you for their sacrifices and dedication to our country, especially for those who are separated from family and home during the holidays. Much like last year, Bellator and the USO will also partner for a week of special events in Hawaii leading up to the big weekend of exciting fights on December 20th and 21st.

As the leading military support organisation, the USO strengthens America’s military service members by keeping them connected to family, home and country, throughout their service to the nation. This holiday season, hundreds of thousands of service members will remain on duty, away from home. The USO, through its programs, services and entertainment tours, is committed to bringing a piece of home to our nation’s service men and women. MMA fans and military supporters can help keep troops strong and connected to home by visiting www.USO.org/Holidays and by using the hashtag #USOHolidays when sharing how they have helped the USO’s critical mission to make the holidays special for our military heroes.

Bellator and the USO Present: Salute the Troops will air on Paramount Network on Friday, December 20th at 10 p.m. ET/9 p.m. CT. The entire event will also stream on DAZN, while preliminary bouts will stream on Bellator.com and globally on the Bellator Mobile App. Details for exclusive ticket distribution will be announced in the coming days.

This unforgettable night will be part of an historic weekend culminating with the previously announced Bellator Hawaii: Macfarlane vs. Jackson on Saturday, December 21st. This highly-anticipated fight card includes undefeated Bellator women’s flyweight champ Ilima-Lei Macfarlane defending her title against Kate Jackson, and A.J. McKee taking on Derek Campos in a quarterfinal matchup of the Bellator Featherweight World Grand Prix.

After signing with Bellator in April, former UFC heavyweight champion Josh Barnett will make his return to MMA competition for the first time since 2016. A second-degree Brazilian jiu-jitsu black belt, Barnett has remained prevalent in the combat sports realm, competing in jiu-jitsu events, promoting and performing at his own professional wrestling shows and working as a colour commentator for New Japan Pro Wrestling. Barnett is no stranger to the devoted MMA fanbase in Hawaii, fighting for regional Hawaiian promotion Superbrawl in 1999 and 2000, a stint that included three fights in one night to win the Superbrawl 13 heavyweight tournament. One of the top heavyweights of all-time, the Strikeforce, Pride, UFC, K-1, NJPW, Pancrase, and Affliction mainstay owns victories over legendary stars, including Dan Severn (2x), Semmy Schilt (2x), Randy Couture, Mark Hunt, Antonio Rodrigo Nogueira, Pedro Rizzo, Sergei Kharitonov, Frank Mir, Roy Nelson and Andrei Arlovski.

Fighting professionally since 2007, Ronny Markes will join the Bellator ranks following 26-fights all over the globe including three wins in UFC. Competing for a majority of his nearly 13-year career at middleweight, the 31-year-old will now lace up the gloves as a Bellator heavyweight. Hailing from Natal, Brazil, Markes is coming off a TKO victory in June, and will add another big-name fighter to his list of opposition, a list that includes fights against Yoel Romero, Thiago Santos, Aaron Simpson and Paulo Filho.