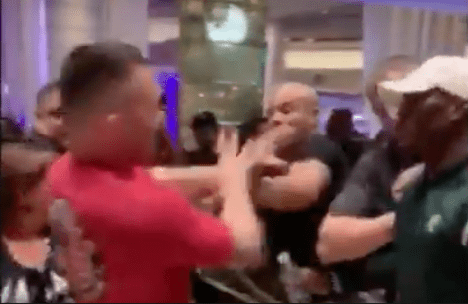 Kamaru Usman and his team have just come to blows with Colby Covington in Las Vegas. After UFC security stopped Usman from approaching Covington as he left the Octagon at UFC 235 (which you can see here), following his win over Tyron Woodley, the new 170lbs champion got up close to the man he will fade in the cage next, in an altercation at Palms Hotel.

At one point a member of Usman’s team lunges at Covington and his manager Ali Abdelaziz is shown throwing a punch. Which covington replied by telling him “You’re not even a fighter”.

To be fair to Usman, it didn’t appear that he threw any punches. Whilst Covington remained fairly calm throughout. And certainly wasn’t as vocal as he had been all week in Las Vegas.

The scuffle comes after UFC President Dana White, confirmed at the post fight press conference that Covington would get the next shot at Usman and the welterweight title. As long as he doesn’t do anything crazy in the meantime. You can watch White say that here.

No date has been set for this clash yet but be sure to see more fireworks the closer we get to the fight.