Khabib Nurmagomedov Opens Up On Losing His Father Abdulmanap 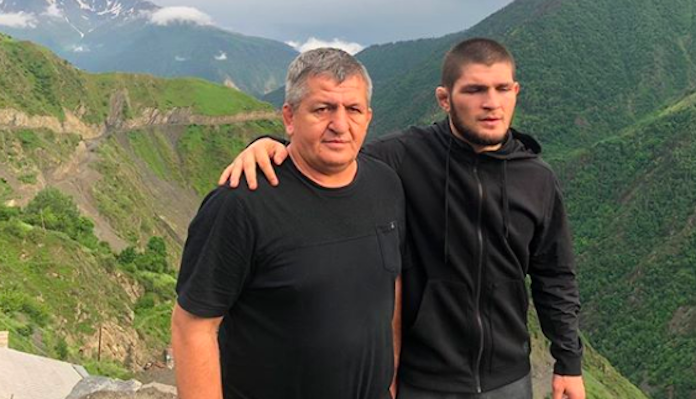 Khabib Nurmagomedov recently lost his father, coach and mentor, Abdulmanap, who passed away after battling complications related to coronavirus. But despite feeling deep sadness, the UFC lightweight champion confirmed that he is going to defend his belt against the interim champion Justin Gaethje, at UFC 254 on October 24th.

Khabib explained how the loss of his father affected his preparation for the fight against Gaethje, during a press conference released by RT Sport (transcript by MMA Fighting).

“I’m sure everyone in this room lost someone. A friend, a neighbour, a cousin, a mother, a father, girlfriend,” Khabib said. “Everyone goes through loss, I understand that. But on the other hand it’s very difficult. Some people have strictly a father-son relationship, but my father was very close to me. We were like friends. He was my father and coach, we were always together. We were very close.

“Of course I’m sad. If I tell you with a straight face that it doesn’t affect my training, that’d be a lie. It does affect me, I think about him all the time. Maybe this pain will put me on another level and make me stronger. Any challenge either breaks you or makes you stronger. We’ll see what it does to me in time.”

Abdulmanap wanted Khabib to retire undefeated once he earned his 30th victory, which means he would only have two more fights left. This was subsequently reiterated by his manager Ali Abdelaziz, but ‘The Eagle’ is just taking it step by step.

“As far as retirement, I’ve been having lots of different thoughts. Right now I’m thinking of my next fight,” Khabib said. “We’ll see what happens next. Right now I’m 31, I’ll be 32 in September. That’s a significant age. I’m no longer a rookie. Looking back at how much time I’ve invested in the sport, it’s fair to say I’m a veteran. I’ve been a professional fighter for 12 years, since 2008. I’ve been in the UFC more than eight years. If you look back, I’ve had an excellent career.

“Right now I’m motivated to come back, to fight, to keep busy, and I think the best place to do is where I am considered a professional. Then we’ll see what’s next. This whole year I’ve dedicated to training, my regiment – morning and evening training, diet, all of this helps distract me from everything that’s happening around me.”

Instead of doing his training camp at AKA as usual, the 31-year-old will have Javier Mendez fly out to Russia in order to help him prepare for Gaethje. Although this will be the first time Khabib fights since losing his father, Abdulmanap’s past advice will continue to echo in the champion’s mind nonetheless.

“He always had pretty firm advice – short, firm advice. He’d tell me to stay focused. He’d say, ‘You decided to fight, you have to get ready.’ There’s no half measures. If you’re fighting, get ready.”

Do you believe the loss of his father will affect Khabib Nurmagomedov’s performance against Justin Gaethje at UFC 254?