Khabib Nurmagomedov Urges GSP To Fight Him Before Retiring 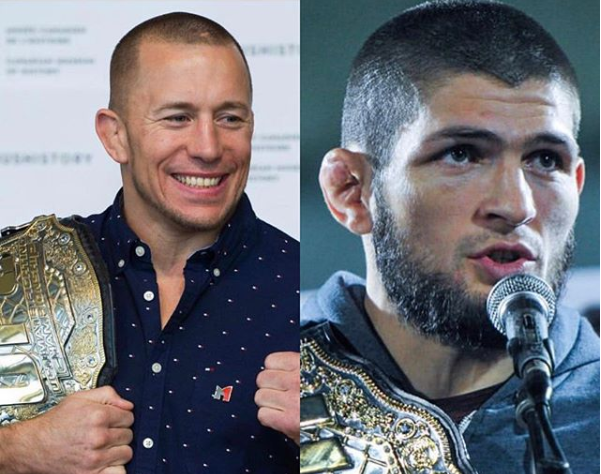 Khabib Nurmagomedov has got wind of the reports regarding GSP’s decision to retire from MMA. We had earlier reported that the former UFC middleweight and welterweight champion will be talking to the MMA media tomorrow. According to multiple sources, GSP will announce his retirement from MMA, after failing to reach a deal with the UFC for a super-fight with Khabib.

The UFC Lightweight Champion has since taken to social media, and urged GSP not to retire from the sport. Khabib Nurmagomedov told St-Pierre to fight him in November, after which he can retire if he wanted to.

“Let’s do it in November”, Khabib wrote on his Instagram. “After this fight you can retire. I grow up on your fights, and have nothing but respect for you, and I believe showed that to you George when you were in Moscow.
But, it would be honor for me to share Octagon with one of the greatest fighters of all time.
Let’s do it 155 lbs, or I give away 5lbs to you, cause you newer done 155.
Well, it’s your choice 155 or 160, Montreal, NYC, Moscow or Abu Dhabi.
Send me location my Friend”.