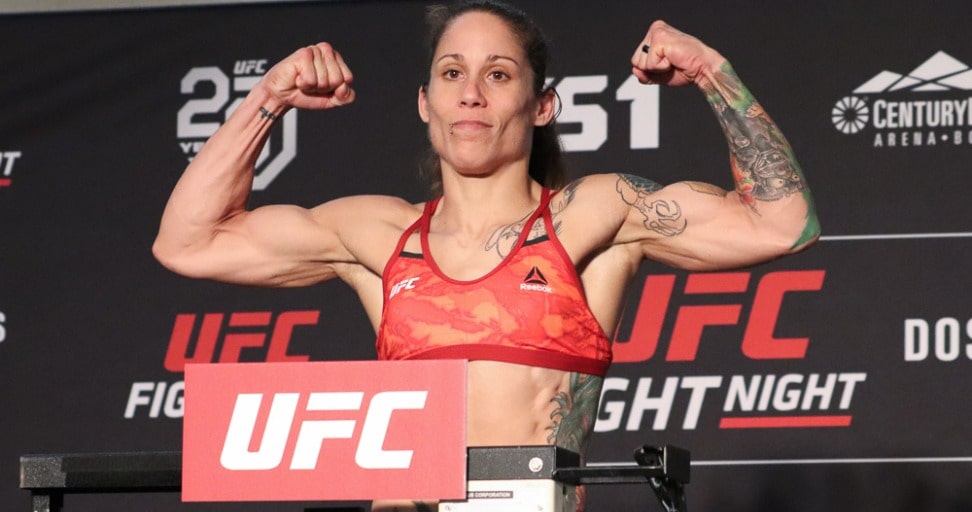 Just four months after challenging for the UFC women’s flyweight title, Liz Carmouche was released from the UFC on Friday. What made the news even more surprising was the fact that 35 year old was in Washington, D.C. at the time she got the news, with the UFC supporting the troops, ahead of this past weekend’s UFC DC card.

Speaking to MMA Junkie (as transcribed by BJPenn.com), Carmouche opened up about finding out that the promotion had released her.

“A little bit pained. They brought me out here [in Washington] and they had me doing a lot of media obligations,” admitted Carmouche.

“I mean, I went to the Arlington ceremony, was part of the wreath ceremony. They brought me out as a veteran and as a fighter. Today they had me going to the hospital and talking to different people in different wards, only to find out I had been released earlier. The news only just trickled down to me,” she added.

“It’s a little bit insane that you would [cut me]. I took time off of work at my own pocket expense. It’s a little bit sad that it would be done that way instead of I’m here with the UFC, anyone could have spoken to me first hand and hear it from my management team. It definitely sucks.”

Despite the unfortunate turn of events, the holder of five UFC wins is remaining optimistic about her upcoming adventures in a new promotion, where she can continue her storied career.

“There are a lot more positive things in my future. There have been different organisations that have contacted me for years now. I’ve just expressed my loyalty to the UFC and staying with the organisation,” Carmouche revealed.

“Now I can actually be a free agent and kind of just see what the best opportunity is, who’s going to have the best fighters. At least I’m going to look forward to that aspect of it.”

As well as her recent title loss to Valentina Shevchenko at UFC Uruguay, which went the distance, Carmouche also fought Ronda Rousey for the women’s bantamweight title in 2013, which was the first ever women’s fight in the UFC. Although she lost via an armbar with eleven seconds left in the first round, she had Rousey in big trouble earlier in the fight.

Former UFC bantamweight champion Renan Barão, has also been released from the UFC in the last few days, after losing eight of his last ten fights.

Which promotion do you think Liz Carmouche should sign with now that she is a free agent?