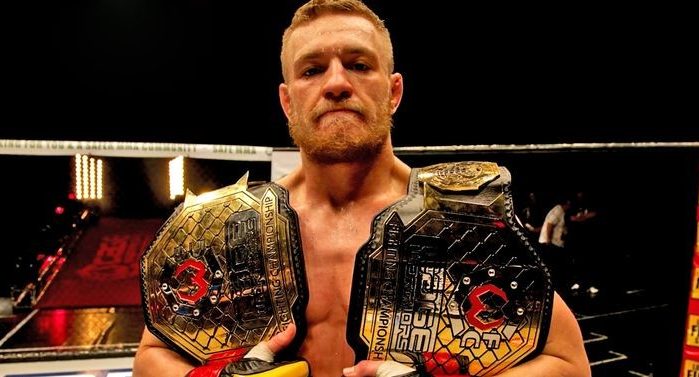 At just 31 years of age, McGregor has succeeded in achieving international celebrity status, which makes it easy to forget about the Irishman’s humble working class roots in Crumlin. Conor began his mixed martial arts career while claiming unemployment benefits from the Irish government. Following his second MMA fight, he even contemplated a different career path. However, SBG head coach John Kavanagh convinced him to continue fighting.

Eventually, an eight fight win streak in the Cage Warriors promotion attracted the attention of UFC president Dana White, during his visit to Dublin in 2012.

An interview has now emerged from McGregor’s Cage Warrior days that offers us a rare insight into the mindset of the former champion during his arduous rise to the top of the MMA ladder.

The interview was originally conducted for BritMMA.co.uk in August of 2012. However the website ceased operations the following year and a huge collection of early exclusive interviews were lost. Luckily for us, the website’s previous owner has recently found the interview and released it back in to the public domain, via Severe MMA.

The newly discovered interview took place in between McGregor winning the Cage Warriors featherweight title by beating Dave Hill in June, and his first scheduled title defence against Jim Alers in September. Alers however was later forced out with an injury. Even back then, Conor had his trademark confidence on display.

“I was a champion before June. I was the champ from the moment I could walk and talk and I let everyone know it too. In my mind there is no one better,” McGregor said.

“The fight in June proved to me what I already knew. It proved to me that hard work and a belief in what you do, no matter what, will always get the results.”

Conor then opened up on his next fight and showed us that his lack of fear was developed from a young age.

“Every fight is the same as your debut. I don’t think of them as bigger fights or tougher fights. They all look the same in there to me. Never mind where the fight is, what show it is on or what opponent it is. It’s all the same; two guys step into the cage and I step out the winner.”

McGregor revealed that his unforgiving work ethic would be the key to his continued success.

“Training is great. I’m outworking everyone around me as always. Rounds upon rounds, miles upon miles, day after day. I’m not working to prevent Alers from doing anything. I don’t care what he does. He is the one that is going be preventing me, because I’m coming at him from the bell to the finish.”

Before speaking to BritMMA.co.uk, McGregor took to social media to state that Alers ‘moves like a novice’. And during the interview, ‘The Notorious’ continued to downplay his chances against him.

“I don’t have any good or bad feelings towards Jim. I never look at it like that. They are all the same once the door closes.

“I don’t think Jim is the biggest threat in our division. There is only one person that can threaten this belt and I look at him every day in the mirror, and he is as confident as they come!”

“I expect him to show up and fight, nothing else. I see me standing right in front of him until he crumbles. I don’t think about who has more experience. I have more fights than Jim but it’s something I don’t give any thought to. I stay ready, that’s all I know.”

After Alers pulled out of their title fight in August, McGregor instead fought Ivan Buchinger for the Cage Warriors lightweight title in December. After scoring a first round KO win and becoming the Champ Champ for the first time, Conor made his UFC debut four months later, stopping Marcus Brimage after just 67 seconds of the first round.

Who would you like to see Conor McGregor fight next inside the UFC Octagon?