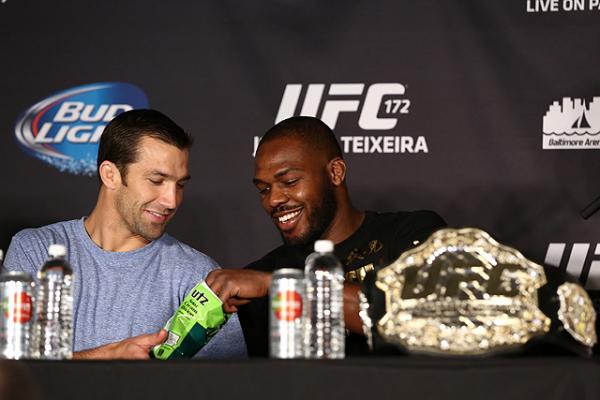 The war of words is just beginning between former UFC Middleweight Champion Luke Rockhold, and current UFC Light Heavyweight Champion Jon Jones. Recently, Rockhold claimed that he would be moving up a weight class to put Jones in his place. Speaking on The MMA Hour, Rockhold laid down yet another challenge to “Bones”.

“We all know he’s tested dirty twice in a row now or three times, I don’t know what it is. Picograms, or whatever the hell they are. He is obviously compensating for something trying to build himself up.

“‘DC’ at heavyweight is a much more dangerous fighter; he’s looser, moving people, I’ve seen him in the gym. Jones picked his words wisely on trying to bait ‘DC’ on trying to come back down.”

Go Up And Fight DC, Or Wait For Me

Jon Jones is currently scheduled to fight Anthony Smith at UFC 235, and Luke questioned Jon’s intentions of taking the fight. Rockhold told “Bones” to either move up and fight ‘DC’, or stay at 205lbs and wait for him.

“If you want to talk about it, go up and fight him go up to where he’s at, otherwise stay where you are at and I will come to you.”