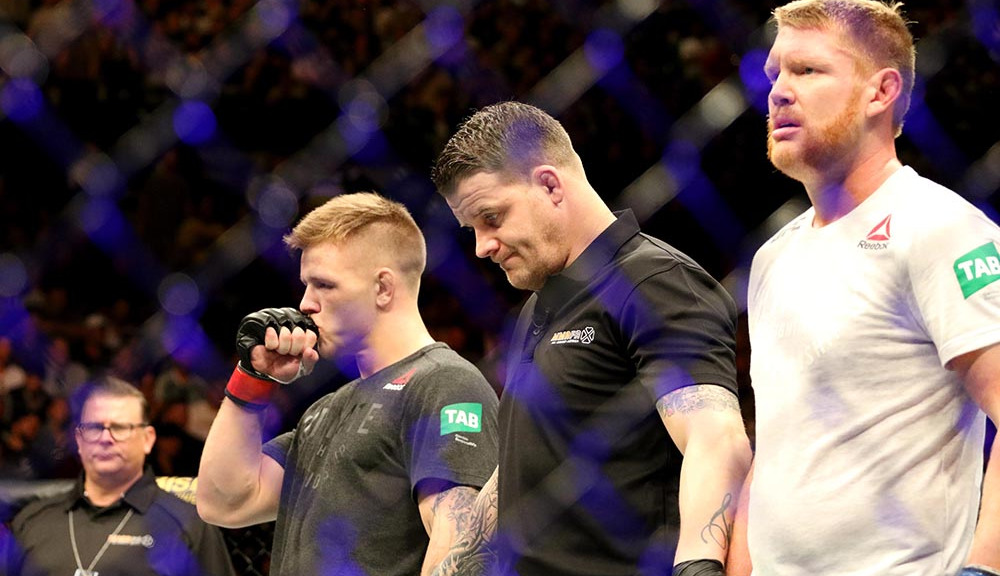 Marc Goddard found himself in the firing line at UFC 234 this past weekend. Sam Alvey, who took the fight against Jim Crute on just two weeks’ notice, was eating shots from Crute, but signaled to the referee that he was okay. Goddard stepped in and called the fight, but afterwards, numerous MMA personalities including the UFC President Dana White questioned Marc’s decision.

In fact, Dana went a step further during the UFC 234 post-fight press conference, saying, “I didn’t agree with the stoppage. I thought it was a bad stoppage. Lot of those shots were hitting him on the arm. But he was obviously hurt, but the fight could’ve gone a little longer. We could’ve seen a little bit more of Crute. Bad stoppage in my opinion.”

And after the backlash he has received over the past couple of days, Marc Goddard spoke with MMA Fighting to set the record straight.

“Yes, I know that Sam obviously jumped straight back up, obviously demonstrating to me and telling me he’s OK”, Goddard said. “But at that point the fight is called. And you know what? Going back and looking at it again, if I could run it back again, yeah I would have taken a half step back. I would have let another two shots or three shots play out. And I’m gonna put it down to a mistake. I’m big and ugly enough to do that.”

Goddard also spoke about how Sam was on spaghetti legs while eating shots, but also apologized to Alvey for not seeing him giving Marc a thumbs up.

“It wasn’t one, two or three shots I’m jumping in and stopping”, Goddard explained. “It was 16. Sixteen shots. And at that point, I’m taking into assessment, I think he’s hurt and not recovered from the original knockdown. I think he’s hurt, I see his head on the mat, I see the shots coming in and I make my call.

“At the same time, as I’m doing that, people are saying, ‘Didn’t you see Sam’s thumb up?’ No, I didn’t. Wholly and honestly, I didn’t see his thumb up, because his arm is outstretched and my focus, my vision is on where these shots are trying to land.

“I approach my job and all the fights the same”, Goddard added. “And I’m sorry to Sam, I really am. I feel bad. But all I want people to try and do is understand where my mental aspect came from. Had I stopped the fight from the ground and pound alone, people would be rightly jumping all over me. But I’m not. It was the fact of what happened before that.”