Mark Striegl Proud To Represent The Philippines In The UFC 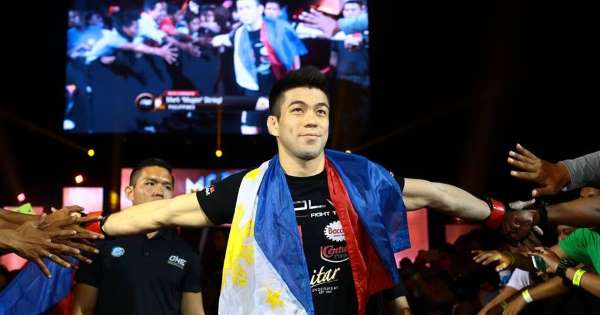 Mark Striegl is set to make his UFC debut this weekend at UFC Fight Island 6, against Said Nurmagomedov in a bantamweight showdown. He was initially scheduled to debut at UFC Vegas 7, but was forced to withdraw after testing positive for COVID-19.

Speaking exclusively to Asian Persuasion MMA before he set off for Yas Island from Las Vegas, ‘Mugen’ said he’s ready to finally make his debut inside the Octagon.

“I got the coronavirus on the week of my last scheduled fight,” said Striegl. “I was one of the fighters that had to cancel and had to pull out of the fight because I got COVID. But thankfully I recovered fast. I did have all the symptoms, so I wasn’t asymptomatic. For me it just felt like a really bad flu. Right now I feel healthy. All the symptoms are gone and I’m ready to rock.”

Striegl has come a long way in his mixed martial arts career. But perhaps his biggest fight will take place this weekend on Fight Island. After tenures in promotions such as URCC, PXC and ONE Championship, ‘Mugen’ is days away from fighting in the UFC.

“For the people that have followed my journey from Baguio City, Philippines down to Manila, and then canceled flights and a canceled fight, it’s been quite a crazy rollercoaster ride journey just to get here,” said Striegl. “But it’s all part of the journey. It’s all part of the super adventure that is MMA and this is definitely one of the big positives of this week.

“Vegas is cool but Fight Island is even cooler. It’s Abu Dhabi Fight Island, Yas Island. So definitely excited about that.”

Having had to stay in Las Vegas longer than originally planned, Striegl has spent the last couple of months training at Syndicate MMA under the tutelage of coach John Wood.

“I’ve been training with head coach John Wood at Syndicate MMA,” Striegl said. “It’s one of the top gyms here in Las Vegas. And I’ve been getting in great work with him and a bunch of top-level training partners and other coaches. It’s been awesome.”

While he was supposed to make his UFC debut in August, Striegl feels that there is a plus side to the delay, and feels better prepared than he was for his original scheduled bout.

“Last time, I pretty much got over-jet lagged and then got in one week of training,” Striegl said. “And then it was like ‘Boom, here we are’, it’s the fight. I’m definitely better prepared this time.”

‘Mugen’ will not only be representing the Philippines in the UFC, but Baguio City as well. And he takes great pride in his roots.

“It’s something that’s super exciting and I’m very proud of,” said Striegl. “I’m very proud of my Filipino roots. My whole family is in the Philippines, my wife and my kid, she’s (my wife) pregnant with another. So my kids are all in Baguio City.

“I grew up in Tokyo, Japan and then moved to the Philippines later. But my parents are now also in Baguio City, Philippines. They retired recently in Baguio. So my family’s there, my wife and kids, and her family’s there. I love the Philippines and Baguio’s very close to my heart. So I’m definitely looking forward to bringing it and getting the win and representing.”

Striegl’s opponent will be Said Nurmagomedov. Although he’s no relation to Khabib, the Filipino believes the Russian will be quite the challenge for his debut.

“I think he’s an explosive, dynamic Russian fighter,” Striegl said. “It’s like the invasion of the Russians. There’s a lot of tough Russian fighters in the UFC but there are no easy fights. This is the UFC, the creme de la creme. So I’m excited for this matchup and this is why I signed with the UFC, to test myself against the best. I’m just super excited for this opportunity and I gotta thank the UFC and Ruby Sports for that.”

“I Don’t Believe In Ring Rust”

It has been 18 months since Striegl last fought. However, despite the inactivity, the 32 year old feels well prepared.

Holidays With The Family

After doing his business in Abu Dhabi, Striegl plans to return to his home country, where he will be reuniting with his family in time for the birth of his daughter.

“I’ll be flying straight back to the Philippines,” Striegl said. “That was one of the deals with my wife. She’s pregnant. The baby is due in December. It’s our second baby, girl this time.

“That was the deal. Go out there, have fun. Do your thing. Get a chance to make some money during these COVID times, which is a blessing. But just get back in time for the baby and the delivery. I’ll be flying straight back from Abu Dhabi to Manila then I’ll be traveling up to Baguio to join the family. All in time for the holidays.”

Striegl promises an entertaining fight packed to the brim with action, when he faces Nurmagomedov.

Do you think Mark Striegl will make a winning promotional debut when he faces Said Nurmagomedov at UFC Fight Island 6?