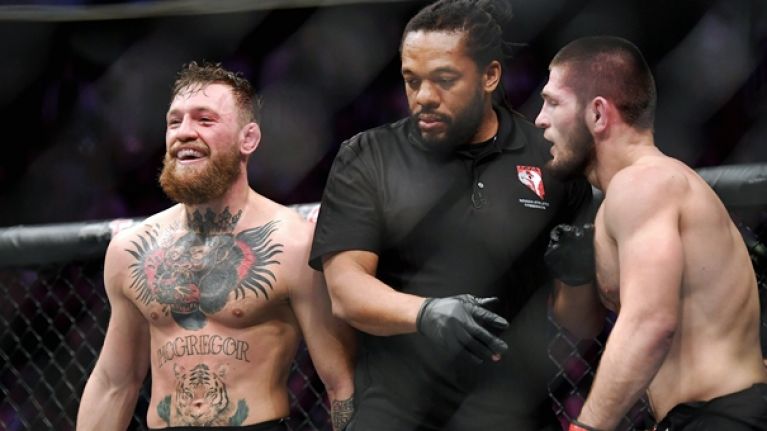 Two years on from the biggest fight in UFC history, Khabib Nurmagomedov vs Conor McGregor, and the Irishman is still arguing his case that he was having success in the fight.

McGregor has previously stated that he won the first and third rounds, and was winning the fourth round, before being taken down and then consequently submitted. Responding to people on Twitter, the former UFC two division champion again agued his case.

Firstly, McGregor hit out at the ‘numb nuts’ fans, who ‘don’t know their arse from their elbow’.

McGregor then specifically went into detail from his UFC 229 main event against Khabib, acknowledging that he lost the second round, but again stating that he was winning the rest of the fight.

‘The Notorious’ went on to say that he didn’t get a scratch in the fight.

UFC president Dana White recently announced that he was working on McGregor and Khabib coaching the next season of The Ultimate Fighter, but the Dagestani ruled himself out.

Despite McGregor frequently calling for a rematch with Khabib, the current UFC lightweight champion has consistently claimed he has no interest in fighting Conor again.

Speaking on the ‘DC and Helwani Show’ in the last few hours, Khabib’s longtime friend and teammate Daniel Cormier, revealed that he has spoken to the unbeaten 32 year old, who told him that he has no interest in doing ‘business’ with McGregor again.

Khabib faces the interim champion Justin Gaethje, this weekend in the UFC 254 main event for the undisputed lightweight title. ‘The Eagle’, whose record currently stands at 28-0, has hinted that he will retire at 30-0. Should he overcome ‘The Highlight’ on Fight Island, he has stated that he wants to fight the former UFC welterweight and middleweight champion Georges St-Pierre, next.

Do you think we’ll ever see a rematch between Conor McGregor and Khabib Nurmagomedov?