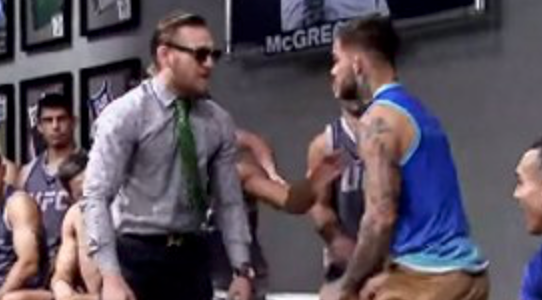 In the light of TJ Dillashaw’s two year suspension for a failed drug test at UFC Brooklyn on January 18th, it was only a matter of time before Cody Garbrandt had his say on the matter (you can read more about the suspension here).

Taking to Twitter in the last few hours, the former UFC bantamweight champion, who lost to Dillashaw twice, reacted by saying more of Dillashaw’s samples should be tested for EPOs.

Garbrandt went on to say that all of his losses have been against fighters that have been popped for performance enhancing drugs (PEDs). Other than losing to Dillashaw twice, Garbrandt lost to Pedro Munhoz in his last fight, who was failed a drug test back in 2014.

‘No Love’ was quick to point out that he didn’t lose his three MMA fights as a “direct result of PED convicted fighters”, brilliantly pointing out that he also fought like a “dumb ass” in those fights.

Soon after that ‘tweet of the day’, Conor McGregor replied to Garbrandt..

And the respect shown from McGregor was reciprocated by the 27 year old.

As much as we all (well a lot of us) enjoy a bit of bad blood between the fighters from time to time, for me, it’s always a beautiful thing to see respect shown between them as well.