McGregor Reflects On First Poirier Meeting, Looks Ahead To Rematch 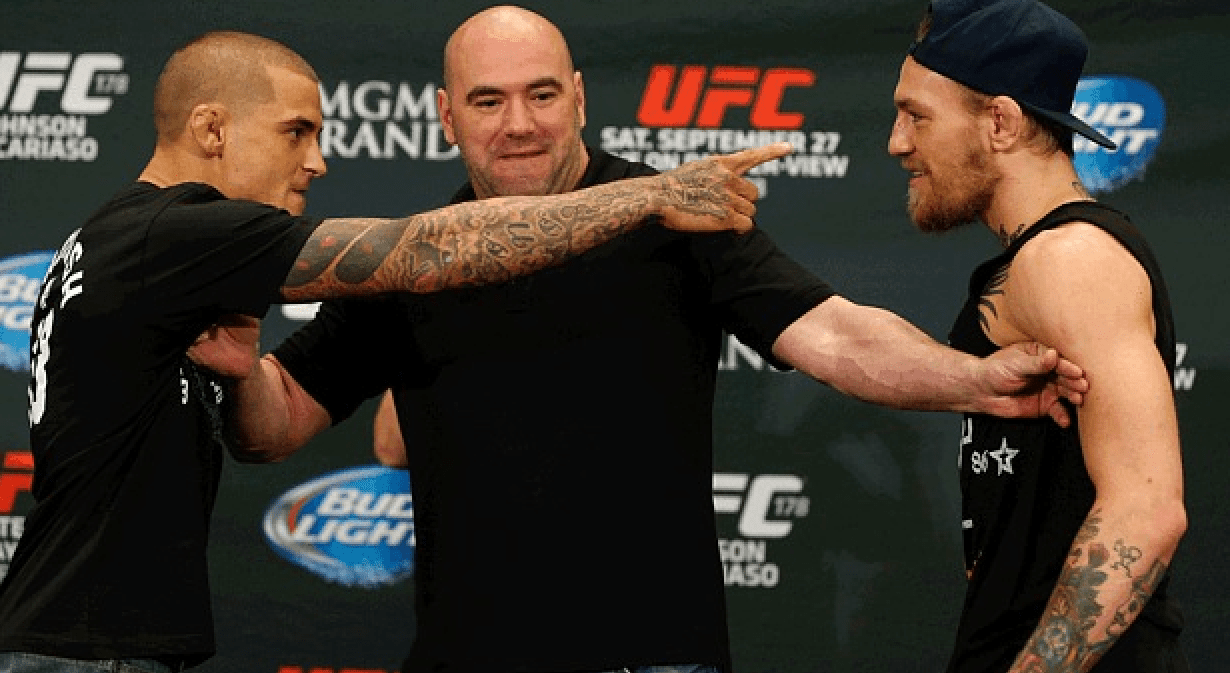 Despite some reports stating that the Conor McGregor vs Dustin Poirier rematch at UFC 257 on January 23rd is a done deal, Dana White has stated that the fight is yet to finalised. The UFC president stated that ‘The Diamond’ has already signed the contract, but with ‘The Notorious’ still to sign, and the uncertainty that remains due to the global coronavirus pandemic, there are still ‘a ton of ifs’.

“January 23rd on Fight Island, if everything goes according to plans,” Dana said. “There are a ton of ifs right now. I have to see where the world is at in the next couple of months.”

McGregor And Poirier’s Fight Face Off

In the last few minutes however, McGregor all but confirmed that he will face Poirier again in the new year. Taking to social media, the Irishman looked back fondly at their first face off six years ago.

“The first time I came face to face with Dustin ‘The Diamond’ Poirier. Las Vegas Nevada, August 2014. I was only beginning to blow up and this was a big one! I rocked renowned Dublin Tailor Louis Copeland on the day. Midnight blue pinstripe. I paired the outfit with me grandas burgundy shoes, which I done an amazing job polishing on my Aer Lingus flight over. Zoom in, have a whiff.”

McGregor went on to reminisce about the day as a whole.

“This same day I also signed a new contract with the UFC, under Lorenzo Fertitta. Lorenzo brought me into his office, myself and my manager Audie Attar, and placed a contract down in front of me with numbers I’d never seen before in my life! I looked over at Audie like, “you won’t be needed on this one mate” ? We both knew but play it cool we are still in the office hahaha! Wild!

“The first of our dealings together on some of the largest purse contracts in the history of combat fighting. Incredible! The moment was captured on one of the episodes of my 6 part series, which I had done for RTE. A real turning point in my career, both financially and professionally. The episode was titled “The Suite Life” as I was rocking around the Red Rock casino in absolute shock and awe. Trying to grasp what the f*** was actually going on Hahahaha! What a wild ride this has been.”

Come January 23rd, it will be almost a year to the day since McGregor’s last fight, when he only needed 40 seconds to TKO ‘Cowboy’ Cerrone at UFC 246. With a year away from the Octagon, the former two division UFC champion is excited to show off his growing arsenal of weapons.

“I am very grateful to be about to return and get to do what I love again. I look forward to the fresh test Dustin will bring since our first bout, while also showcasing my own incredibly deep cache of weaponry. Whatever tool is needed on the night will be pulled from the duffel.”

And as promised previously, McGregor plans to keep his word and make a donation to Poirier’s ‘The Good Fight Foundation’, and also help the disadvantaged youth in his own home town.

“I am also really excited about aiding Dustin’s charity “The Good Fight Foundation”, which through the donation, will build a gym/premise for disadvantaged youth in his childhood hometown. I truly love this, and pledge to match the donation on a premise in my own childhood hometown! Both spots with an ode to the upcoming bout.
Excellent stuff!
See you guys soon.”

In their first meeting at featherweight at UFC 178, McGregor needed less than two minutes to score a TKO victory. The rematch is expected to be at lightweight.

How do you see the rematch between Conor McGregor and Dustin Poirier going?