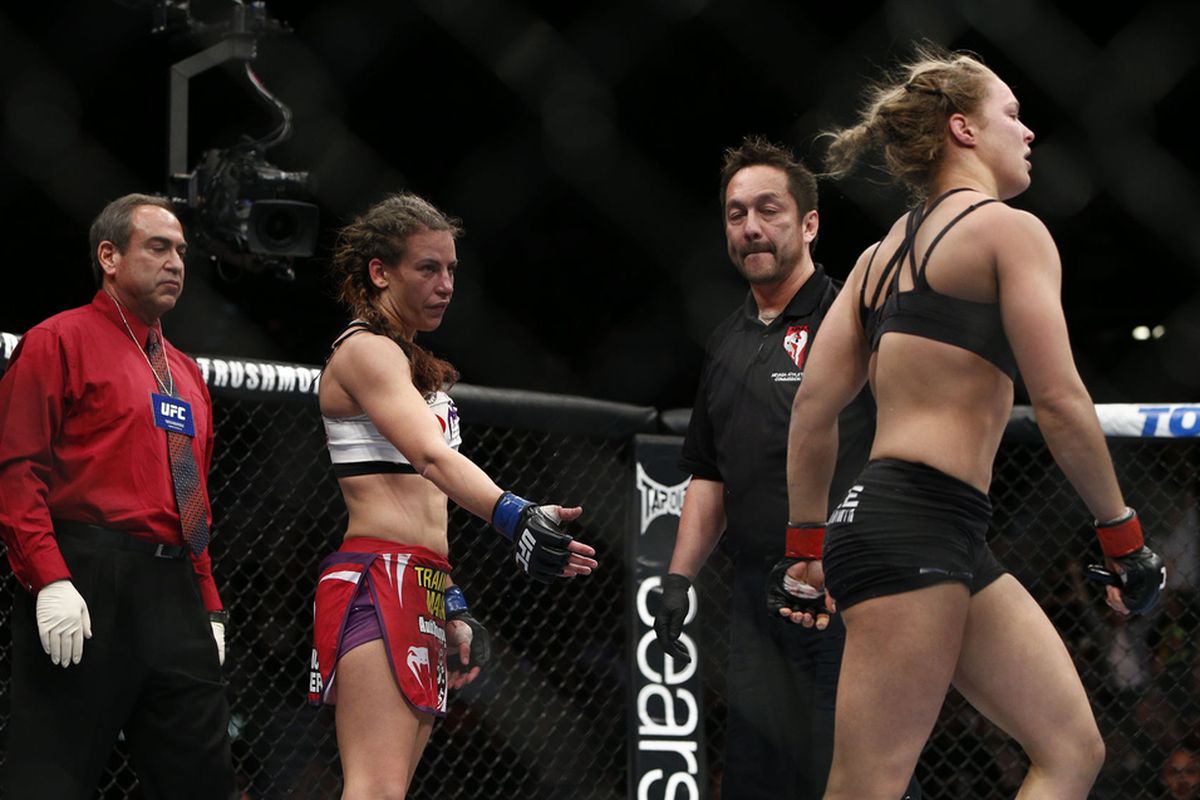 When we talk about heated rivalries, there are arguably few that come close to the rivalry between Miesha Tate and Ronda Rousey. Miesha and Ronda met twice: once in Strikeforce, and once in the UFC. Ronda Rousey defeated Tate on both the occasions, but there has always been animosity between the two stars.

Now that Miesha and Ronda have retired from the sport of mixed martial arts, one can sit back and analyze how their rivalry unfolded. While Miesha is considered to be one of the most likable personalities in the sport, Ronda has always been the “bad girl” of MMA. While Ronda was once considered to be the greatest combat sports athlete in the world, her fall from grace led to many questioning her accolades.

Miesha Tate recently spoke about Ronda’s accomplishments, and speculated that Ronda Rousey would be unhappy with her legacy, given her exit from the sport.

“It’s very Ronda-esque”, Miesha Tate said on MMA on SiriusXM, when discussing Ronda Rousey’s recent comments about the fans not deserving to hear her thoughts on her legacy (transcript via BJPenn.com). “Look, she’s not wrong even though it’s a bit arrogant but I think that’s the style that people have appreciated about Ronda. It’s not necessarily something I appreciate about Ronda, but when you talk about her legacy this does sum it up in one quote, really. It’s that she knows she has value and interest but she also really doesn’t give a sh*t what anybody else wants to hear.

“She’s not entirely an open book. She’s not there entirely for the fans selflessly. Ronda has always been about Ronda so it doesn’t surprise me. She continues to be exactly how she’s always been.

“When I listen to this, she almost sounds emotional. I don’t think she’s entirely happy with her legacy”, Tate continued. “The point that Ronda [gives] about us not deserving to hear it and about the vulnerability, I think it speaks again to point that she left the sport worse than she entered in.

“She has an inflated ego, she does have all of those things. I talk about myself and we’re polar opposites, that’s why we never really got along.

“I started my career off a loss. I started my career with the humble approach”, she explained. “I’m a very open book. I’ve got nothing to hide. I’ve won some, I’ve lost some, I don’t have the need to put myself on a pedestal or not be an open book. I enjoy being transparent because I hope somebody can take something away from my gains and my losses. I’ve lost horribly in front of the entire world and so did Ronda.

“But she has a chance here to open up and to give some insight and perspective and motivation but she’s obviously not at that point where she feels good enough about her own legacy to be vulnerable and to reflect and give back. She’s obviously not in a good place with it.