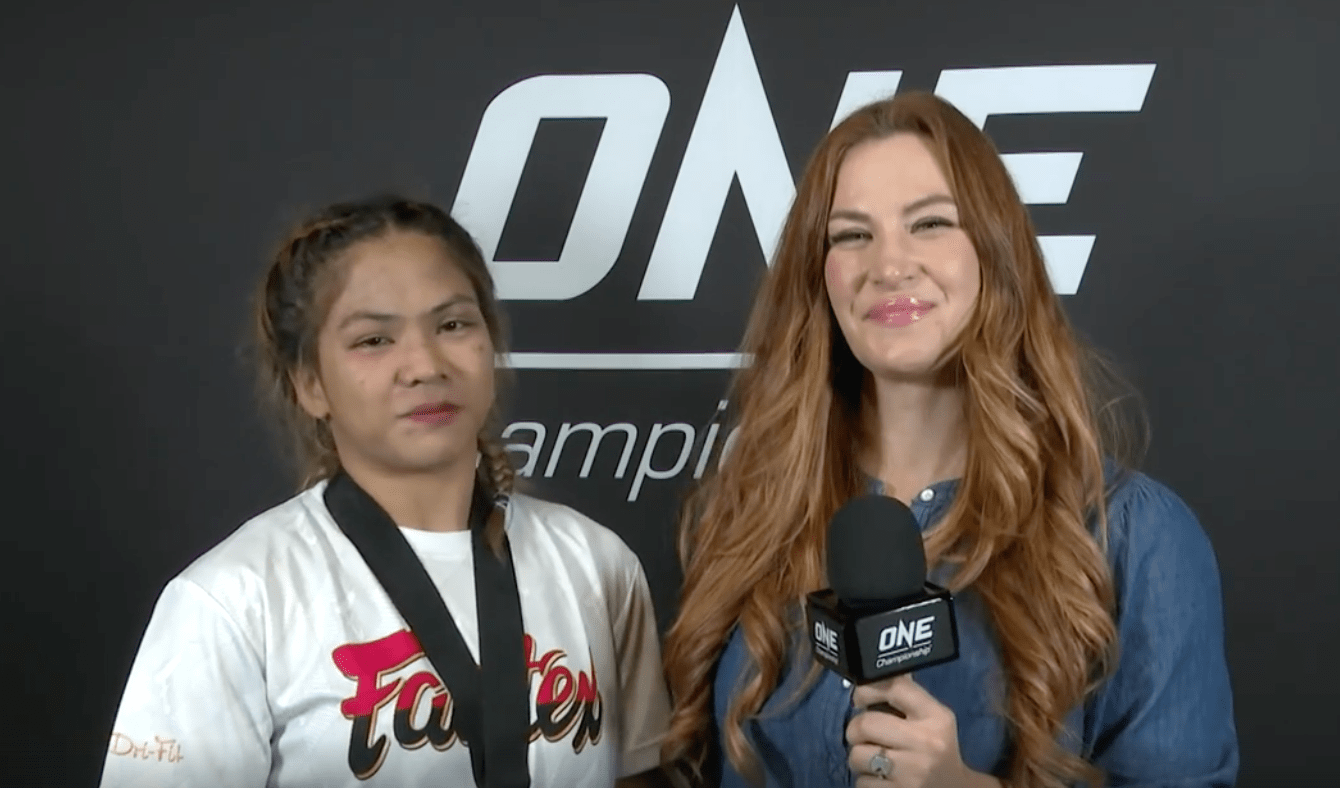 After a five-month hiatus brought on by the global coronavirus pandemic, ONE Championship made a triumphant return to action with ONE: No Surrender on July 31st in Bangkok. Since then, the organisation has hosted three more events in Thailand’s capital city.

The latest of those events, ONE: A New Breed, featured atomweight title contender Denice Zamboanga, who was originally scheduled to challenge the reigning champion Angela Lee prior to the pandemic. Fighting on the same card with her brother Drex for the first, ‘The Menace’ needed only 88 seconds to submit Watsapinya Kaewkhong.

Speaking to SCMP MMA‘s Tom Taylor, ONE Vice President Miesha Tate said she believes Zamboanga is something special and a future champion.

“I think Denice is another great one. She’s somebody that I’ve talked about and I think it’s obvious that Angela Lee is phenomenal it’s obvious that Xiong Jingnan, these are women that you are aware of. Somebody you may not be aware of, who I think is a future contender, potentially a future champion, is Denice Zamboanga. Because she has this something special, something not tangible.

“Denice has something that’s unique to her in that, I think it’s her passion, her tenacity, her heart, her determination, her underdogs status. Maybe that’s what it is. She’s consistently the underdog but she consistently performs like a champion. And I think that when you see that in somebody, who’s continually underestimated and is able to harness that and use it to become motivation and drive her, I think that is really special. And I think that she will use that to eventually become a champion.”

Denice Or Stamp For Next Title Shot?

While Zamboanga was set to fight Lee for the title, the question has arisen as to who should be in line first for the title between her or her former teammate, Stamp Fairtex. Tate believes experience is the key answer.

“They’re both incredible women and I think Denice clearly has more experience in MMA. And Chatri said after her last victory, ‘She will be next in line.’ But then Stamp has made a valid argument as to why she really could be a number-one contender. I would go with Denice. I would say Denice. She’s more experienced in MMA and she’s just special in that element that she’s always the underdog.

“I think Stamp Fairtex as she gains more experience, training on the ground and everything like that, I think she’s a close second. I would be okay with either one. I think they’re both valid contenders.”

Stamp improved her MMA record to 5-0 at ONE: No Surrender, before losing her ONE atomweight Muay Thai title one month later to Allycia Araujo at ONE: A New Breed.

ONE Championship’s Partnership With Ali Abdelaziz

The Singapore-based organisation recently entered a partnership with high-profile manager Ali Abdelaziz, who has brought ONE a number of big-name signings, such as Marcus ‘Buchecha’ Almeida and Amir Aliakbari. Tate is familiar with the Dominance MMA CEO herself and is confident in what he can bring to ONE Championship.

“Ali is a friend of mine and I have yet to talk to him about this. But we’ve trained together. He trained at Xtreme Couture where I used to train when I was living back stateside. What I do know about Ali is he’s one of the best managers in the business. And he’s tenacious and he has a lot of great talent and he has an eye for talent as well.

“So I really believe that anybody, if they’re managed by Ali, chances are they’re pretty damn good and they’re gonna make a name for themselves. So of course I’m excited about that. Ali has really some of the best talent and he has a really large talent pool as well. So I think anybody that Ali is bringing is gonna have some serious value.”

Do you agree with Miesha Tate’s comments on Denice Zamboanga?

ONE Championship continues its action with ONE: A New Breed 2 on September 11th in Bangkok.