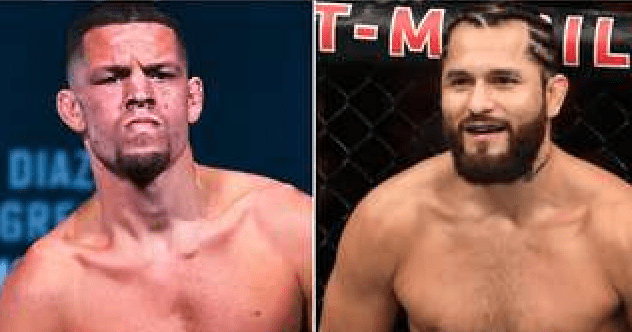 I guess, when you have a Baddest Mother F***er title on the line, you should expect some drama in the lead up. And that’s exactly what we got in the last week. When Nate Diaz posted a statement to his social media that he had been notified of a failed drug test be USADA, his fight with Jorge Masvidal at UFC 244 looked for certain that it would be scrapped.

However, what does a bad mother f***er do when his back is against the wall? He stands his ground and takes no s***. And that’s exactly how Nate dealt with the situation. Fast forward a few days and both USADA and the UFC have confirmed that the UFC 244 main event, for the BMF title, is on.

Speaking on a UFC 244 media call (as transcribed by The Mac Life), both Nate and Masvidal were asked about the drama leading up to their main event at Madison Square Garden. Both had very different outlooks. Nate’s attitude was, ‘If we gotta cancel the fight, then that’s what we’re gonna have to do’. While Masvidal on the other hand, said anxiety kicked in.

“I wasn’t happy about any of it actually. I think it was all a big old bunch of bulls***,” Nate stated on the media call. “So I didn’t want to not be apart of the big old f***ing secret. I think the thing about people on steroids is people on steroids don’t talk about steroids out loud. If we’re going to have to get down to the point, let’s get down to the point, I’m not gonna hold a secret and figure it out afterwards, we need to get this out the way because I got s*** I gotta put my mind on.

“If we gotta cancel the fight, then that’s what we’re gonna have to do, but we gotta get that s*** out the way, because that’s whack. I thought it was all a bunch of bulls*** and made up anyway. But it’s behind us now so we can move on.

“I knew I was cleared to go anyway, so I was like, ‘Fix it, you guys are gonna make up some bulls*** eventually so let’s clear it the f*** up right now. And you guys and I’m gonna be on fair grounds. It ain’t gonna be on no after the fight, ‘This is why he won or lost’ type of s***. I ain’t playing that s***. It’s going to be on fair grounds … So if you guys are trying to play me like there’s any type of cheating or any bulls*** or anything, then I’m not involved. Because I don’t want to have no excuses for winning or losing. I just want it to be a fair fight like it should be.

“I’ve seen other people get in trouble for this type of thing before, they keep a big old secret, because they caught them and say, ‘Let’s keep this on the low, because it might ruin the show’, and I’m like, ‘There is no f***ing if we’re not gonna do it right, so let’s make it happen right’. Then the second I tell them, it’s all a sudden right, it’s cleared. It’s kinda funny to me, the whole situation. I’m gonna leave it behind me, I’m done with all that s*** now, but if they wanna call me on that kind of s*** again, we can test everyday for the rest of my life, because I’ve been taking the same s*** I’ve been taking for the past five years. Don’t try and play me, because I ain’t playing back.”

Nate went on to say that even if he had have accidentally ingested something illegal, he would rather wait for it to wear off, before stepping inside the Octagon.

“It was just a big secret and it was shady and it sounded like some s*** that people on steroids or involved in. I didn’t feel comfortable with that, so I’m like let’s just put it on the table then. If you tell me I’m gonna test positive for some s***, and everyone’s gonna freak out and go buck wild, then I don’t even wanna fight. It’s only cheating if you jump in under the influence of that s***. So let’s just say I did accidentally take that s***, which I didn’t, let’s just say I did though, well then let’s just f***ing fight in a couple months when that s*** wears off. I have no problem with that, I don’t care about ruining your show, you ain’t ruining my whole legacy.”

Not only did the younger Diaz brother proclaim his innocence, he also stated that he believes he was set up.

“Of course [I think it was a set up]. I shouldn’t even get into the details, but every time after a fight, relationships change with the whole company. Every fight. You know what I’m saying? What if I win this fight? For one, I’m already the baddest mother f***er in the whole game, I made all this happen, so the title’s already mine. Now what if I win this fight? They can’t have a real mother f***er like me owning the whole shit and being hard because too many people gonna hear it. I ain’t trying to bust nobody out, but I feel like they need some kind of leverage over me to keep me from being king of the whole s***.

“I don’t feel like everybody’s ever been on my side in this s***. I’m not the guy they ever wanted to be. I don’t know. It’s confusing as hell to me, and it’s hard to trust anybody in this.”

When Masvidal heard the news, he didn’t believe it at first. And then once he knew it was for real and that he could be pulled from UFC 244, a little bit of anxiety kicked in.

“A little bit of anxiety came. Not anxiety in the sense I thought Nate was a cheater, because I never thought he was a cheater. Just the uncertainty like, ‘They might pull my fight because of some lab screw-up? Because of some weird-ass s***?’ I don’t want to diss on USADA, either, because I think they’ve cleaned up a lot of the sport, but it’s not one hundred percent right yet.”

And with the anxiety, came comfort eating. But luckily for Masvidal, his team was there to help calm the anxiety and get back to business.

“By day number two, anxiety hit. About two pizzas later and hot fries and other things I shouldn’t have put in my body, the coaching staff got a hold of me to calm the anxiety down. We went about business. When I get anxiety and depression and things like that, I take to eating.”