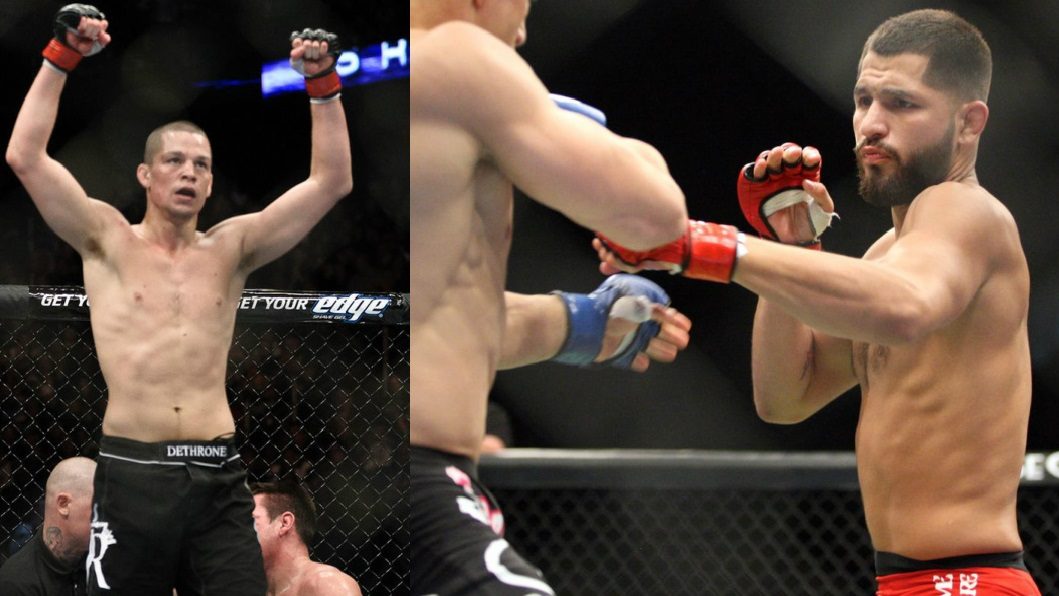 Many years ago, I watched grainy footage of backyard fights involving a then unknown Jorge Masvidal. Jorge would easily out-box his opponents, as Kimbo Slice watched over the rookie. With every punch, every blow, there was a sign of conviction; with every knuckle he landed, every drop of blood that seeped out of his opponent’s quasi-battered face, Masvidal became more resilient. Growing up in the streets, Jorge’s almost rags to riches story has unraveled in front of our eyes, but we only realized it courtesy of Ben Askren’s slouched body hitting the mat.

Around the time when Masvidal was recruited by Strikeforce, a young, lanky kid by the name of Nate Diaz was fighting in TUF. Universe works in mysterious ways; two fighters who turned pro nearly 16 years ago, will have their marquee fight against each other in one of the most iconic arenas on the planet in November of 2019. While Masvidal captured the imagination of the fans with a riveting — almost telegraphed — knee, Nate Diaz’s first big moment under the sun came against Conor McGregor.

If we some day write a book about Nathan Diaz, one can almost be sure of the fans scurrying to read about his rivalry with Conor McGregor. Going into their first fight, McGregor was the all-conquering Irishman, who dared to drudge upon the land, and carried back heads to show for his Machiavellian ways. That was until he ran into an “OG”, who cared not for beating Conor at his own game, but rather wait to impose his own on the former featherweight champion.

When Diaz defeated Conor after being pummeled in the first round, the moment embodied the re-birth of Nate. Prior to beating McGregor, Nate had picked up a decision win against Michael Johnson, but lost the fight prior to Rafael dos Anjos. He wasn’t supposed to fight Conor either; UFC had to find a replacement for dos Anjos, and stumbled upon Nate, who, as luck would have it, had previously called out McGregor.

And then, everything started falling into place.

It is often said that we do not understand the greater plan, until it plays out in front of us. The seeds for the main event for UFC 244 were planted over a decade ago. Through every bump and hardship along the way, Jorge and Nate Diaz were writing their own destiny. When the bell finally rings at UFC 244 between the OGs from the East Coast and the West Coast, it will signal the moment of truth for both the fighters.

In hindsight, Jorge Masvidal and Nate Diaz are perfect opponents. From their affinity towards brawling and bloodshed, to their personas, one could argue that they are the ideal match-up for each other. But there is something larger at play than just a fight; come November, they will be fighting for vindication. Vindicating their journey, their hardships, and the long, arduous road they had embarked on nearly a decade and a half ago.

Unlike other fights that were highly anticipated, there is almost no animosity between Nate Diaz and Jorge Masvidal. The entire event will be built on the back of their surging popularity for — and this might be new to some people — their genuineness. Neither Masvidal nor Nate believe in bad-mouthing people, or creating controversy stemming from someone else’s beliefs. Unlike previous “money fights” in mixed martial arts, which required at least 6 months to a year of build up, the fight between “Gamebred” and Nate require(d) little hype.

At a time when Conor McGregor is seen more frequently on the news than inside the cage, this comes as a welcome change for the UFC.