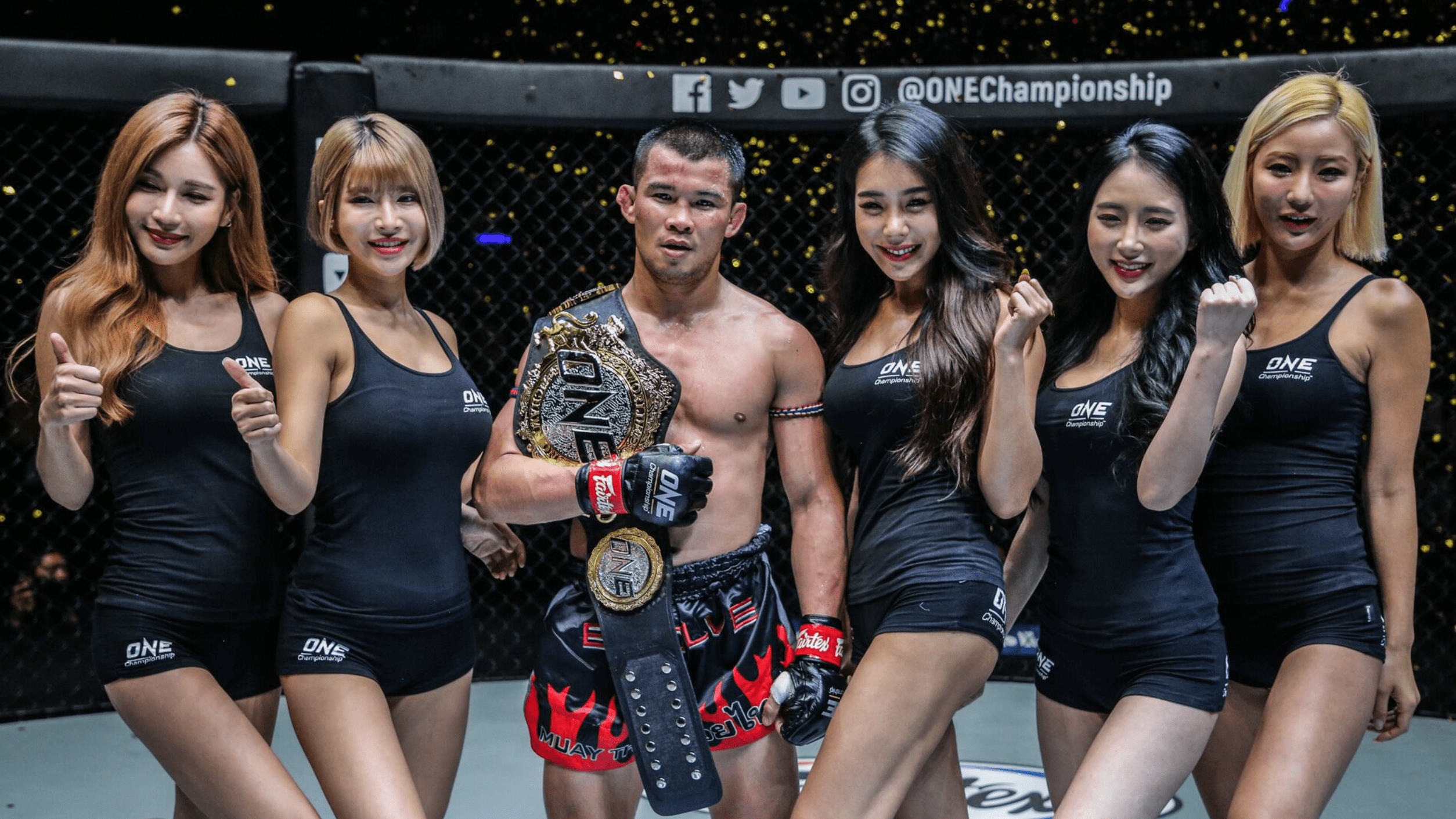 ONE Championship once again returned to the Impact Arena in Bangkok to deliver yet another spectacular martial arts event. ONE: WARRIORS OF LIGHT saw the best and the brightest stars in martial arts grace the ONE Circle to showcase their incredible skills. In the main event, reigning ONE Bantamweight Muay Thai World Champion Nong-O Gaiyanghadao successfully retained his World Title, defeating game challenger Hiroaki Suzuki of Japan by unanimous decision after five rounds. In the co-main event, Petchdam Petchyindee Academy of Thailand defeated Elias Mahmoudi of Algeria to capture the inaugural ONE Flyweight Kickboxing World Championship.

In the main event of the evening, Muay Thai legend and local Thai superstar Nong-O Gaiyanghadao retained his ONE Bantamweight Muay Thai World Championship with a completely dominant showing over game but overmatched challenger Hiroaki “Kaibutsukun” Suzuki of Japan. Suzuki took the full force of Nong-O’s mighty right lead roundhouse kick for the duration of the five-round bout, and survived the onslaught to the final bell. Nong-O, however, was ahead every step of the way behind a virtuoso performance. In the end, all three judges scored the bout in favor of Nong-O Gaiyanghadao to win by unanimous decision.

In the co-main event of the evening, Thailand’s “Baby Shark” Petchdam Petchyindee Academycaptured the inaugural ONE Flyweight Kickboxing World Championship with a gutsy performance, outlasting Algeria’s Elias “The Sniper” Mahmoudi to win via technical decision. Action was intense throughout the contest, with Petchdam unloading his vaunted left leg kicks and Mahmoudi finding success by using his length to his advantage. An illegal blow in the fifth and final round ended matters abruptly however, as Mahmoudi was deemed unable to continue after the break. The bout went to the judges’ scorecards and all three judges scored in favor of the winner, Petchdam Petchyindee Academy.

Japanese veteran Shoko Sato made a successful ONE Championship debut, finishing New Zealand’s Mark “Tyson” Fairtex Abelardo with a furious barrage of ground-and-pound. Following a fierce first round which saw Abelardo come out of the gates aggressively, Sato turned up the heat in the second, taking Abelardo to the mat and finishing him off with strikes from the top. With Abelardo offering no defense, referee Yoshinori Umeki was forced to call a halt to the contest in the second round, awarding Sato with the technical knockout victory.

Muay Thai superstar Rodtang “Iron Man” Jitmuangnon of Thailand sent his hometown crowd of Bangkok into a frenzy, delivering a riveting knockout finish of Cambodia’s Sok Thy. Rodtang came out of the gates blazing, firing a myriad of blistering strikes at Thy, who offered very little defense. It was Rodtang’s thudding leg kicks that did the most damage however, as the Thai warrior endlessly battered Thy’s lower body into submission. Although Thy survived the first round, “Iron Man” put on the finishing touches with another ferocious combination to end matters a little over a minute into the second round.

Local Thai athlete Pongsiri “The Smiling Assassin” Mitsatit authored a thrilling knockout of the Philippines’ Robin Catalan in a strawweight mixed martial arts contest. Catalan started the bout aggressively, pursuing Mitsatit across the ONE Circle with his wushu-style combinations whilst taking Mitsatit’s back. After Mitsatit escaped and action returned to the feet, “The Smiling Assassin” began to unload thunderous knees to Catalan’s body, delivering the final blow to the Filipino’s ribcage to end matters midway through the first round.

China’s “Muay Thai Boy” Zhang Chenglong and Cyprus’ Panicos Yusuf delighted the Impact Arena crowd with an intense striking skirmish in their three-round ONE Super Series kickboxing contest. It was a furious pace from start to end, as both Zhang and Yusuf unloaded their best strikes for the duration of the bout. In the third round, Zhang dropped Yusuf twice and nearly finished the Cypriot, but Yusuf survived to the final bell. In the end, the result was clear as Zhang took home a unanimous decision victory for his efforts.

Japanese veteran Kazuki Tokudome came back from being dominated in the first round, to stopping Australian powerhouse Adrian “The Hunter” Pang in the second with a fierce offensive, winning via technical knockout. The two warriors traded their best offense from the opening bell, tagging each other with powerful combinations. After a Tokudome left straight opened up a cut above Pang’s left eye in the second round however, the official physician deemed Pang unable to continue and Tokudome was awarded the victory.

Cyprus’ Savvas “The Baby Face Killer” Michael put together a spectacular performance, defeating multiple-time Muay Thai World Champion Singtongnoi Por Telakun in a ONE Super Series Muay Thai flyweight contest. Michael’s long reach and pinpoint accurate striking proved to be a problem for the Thai striker, as the Cypriot kept Singtongnoi constantly at the end of his combinations throughout the contest. In the end, all three judges scored the bout in favor of Michael to win by unanimous decision.

Thai superstar Superlek Kiatmoo9 turned in a scintillating performance, punishing opponent Rui Botelho of Portugal for three rounds en route to a unanimous decision victory in a ONE Super Series Muay Thai flyweight bout. After dropping Botelho in the first round with an overhand right, Superlek proceeded to pick Botelho apart for the duration of the contest, showcasing his complete arsenal of offensive weapons. Botelho had his moments, but they were few and far between. In the end, all three judges scored the bout in favor of Superlek.

Former WFL World Champion Pieter “The Archangel” Buist of The Netherlands made a successful ONE Championship debut, coming from behind to topple Japanese grappler Kota “Kong” Shimoishi. After getting controlled on the ground in the first round by the stronger wrestler in Shimoishi, Buist came alive in the second round, connecting on a handful of significant strikes including a right straight that wobbled his Japanese opponent. Buist followed up by landing three technical ground knees to earn the stoppage victory.

Former ONE World Title challenger Janet “JT” Todd of the United States made a triumphant return to the ONE Circle, dominating and then finishing opponent Wang Chin Long of Chinese Taiwan. Todd was faster and sharper with her strikes up to the finish, as Wang played defense for the majority of the contest. Todd dropped Wang three times in round two, earning her a technical knockout in the final second of the frame.

Kicking off ONE: WARRIORS OF LIGHT were strawweights Ovais “The Enigma” Shah of Pakistan and “Wolf of the Grasslands” Hexigetu of China. The two athletes put together a highly-competitive technical battle featuring Shah’s rangey striking and Hexigetu’s wrestling. In the end however, it was Hexigetu who emerged victorious, earning the judges’ nod to win by unanimous decision.


You can see the full results from ONE: WARRIORS OF LIGHT, here: