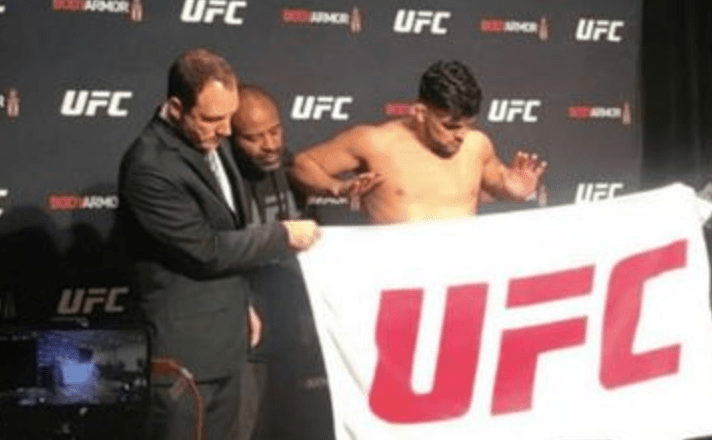 Two and a half years after Daniel Cormier controversially leant on his towel to make weight at UFC 210, ahead of his light heavyweight title clash with Anthony Johnson, Kelvin Gastelum has found himself being accused of cheating the scales, at UFC 244.

Gastelum faces Darren Till in the co-main event of UFC 244, which goes down this weekend at Madison Square Garden, New York.

Kelvin was the last fighter to weigh-in on Friday, taking to the scales with one minute to go. Usually a sign of a tough weight cut. Despite this, the 28 year old weighed in at 184lbs, 2lbs under the 186lbs limit for a UFC non-title middleweight fight.

Hidden behind a towel to hide his modesty, whereas every other fighter in need of cover used the ‘loop of shame’, Gastelum’s elbow was caught on camera touching his coach, Rafael Cordeiro’s shoulder. Obviously if there’s any contact, it possibly skew the official weight.

“In light of this violation, the Commission will pursue disciplinary action. At this time, the official weight determination will not be disturbed, and Mr. Gastelum will not be disqualified from competing in UFC 244, as the possible contact indicated in the video cannot be said to have materially impacted Mr. Gastelum’s weight to the extent that he would have exceeded the applicable weight limit allowable for competition in the match.”

The NYSAC’s rules on weighing in read as follows:

When asked about the incident, Gastelum denied any wrong doing, replying “I didn’t even notice that he (Cordeiro) was so close to me. What the commission told me was to lift my hands up. So that’s what I did. I was just following the rules”

Till was asked by Brett Okamoto about the controversial weigh-in, to which he replied he didn’t care.