ONE Championship Launches In The US This Month

ONE Championship officially launches in the US on January 19th. The first event to be shown in the US by ONE’s partner’s B/R Live and TNT, will be ONE: Eternal Glory in Jakarta.

Ahead of the event, ONE CEO Chatri Sityodtong has shared the first promo for the US launch.

The first ONE card of the year will feature 15 fights, headlined by Team Lakay’s Joshua Pacio defending his strawweight title against Japan’s Yosuke Saruta. Also on the card is a rematch between Edward Kelly and Christian Lee and home favourites Priscilla Hertati Lumban Gaol, Stefer Rahardian and Anthony Engelen. 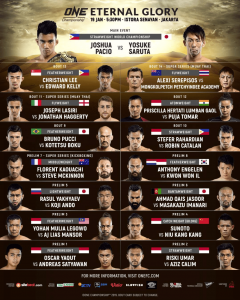 ONE Championship is home to some of the greatest pound-for-pound martial artists in the world:

With over 110 World Champions on the ONE roster, big names like Demetrious Johnson and Eddie Alvarez signing with the promotion, the lightweight and flyweight Grands Prix going down this year and the new US TV deal, 2019 is looking like it’ll be an even bigger year for ONE than it was last year.

Asian Persuasion MMA will be in Jakarta all fight week to bring you the latest news and interviews. So stay tuned!