ONE Championship Plans To Conquer India With Heroes Like Ritu Phogat 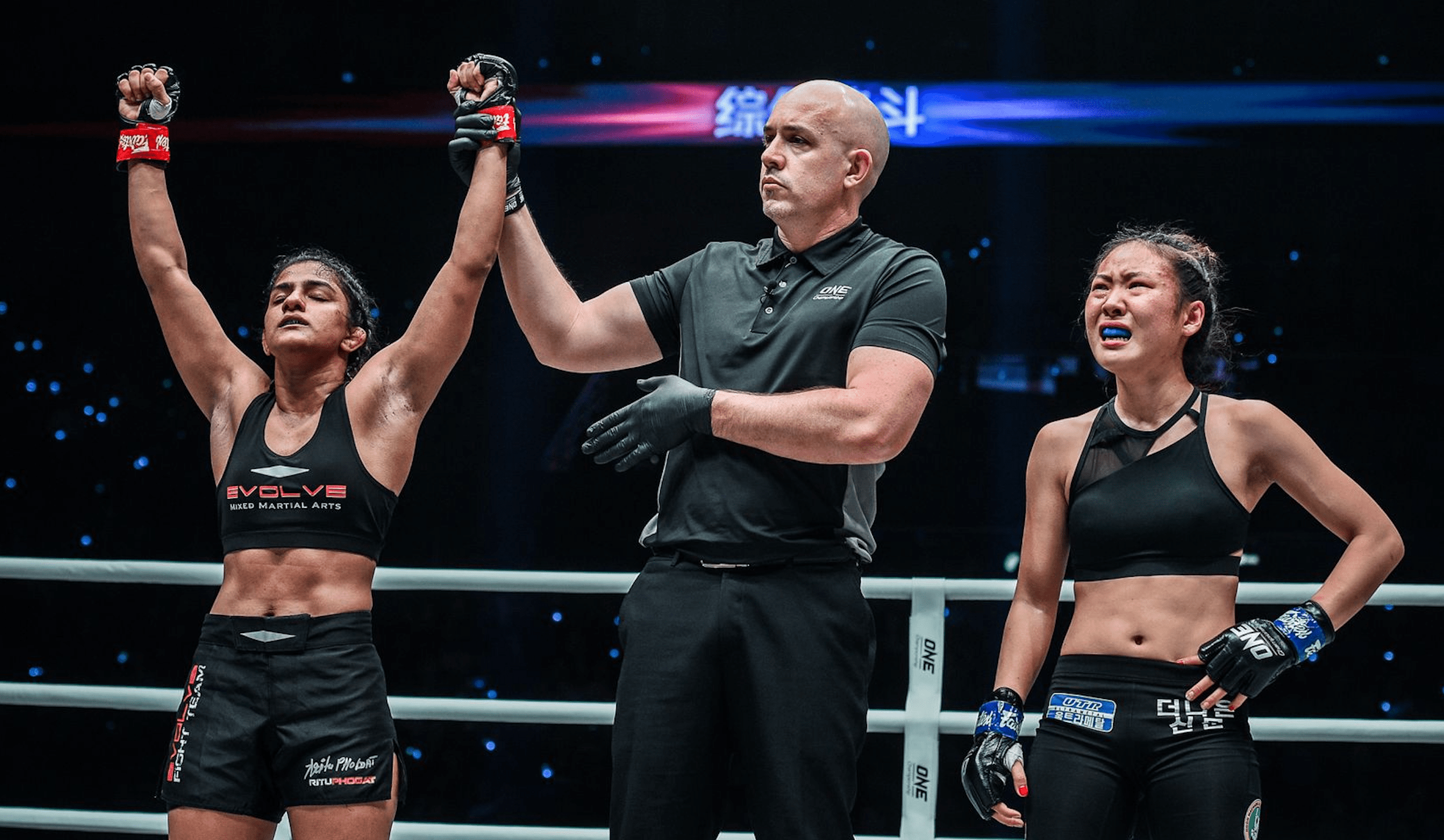 ONE Championship has conquered the East Asian MMA market in just nine years with the distinctive business model, warrior ethos and unique storylines. Whilst promoting ethnic diversity and elevating the best mixed martial artists on the planet as real life super heroes.

Now, ONE is looking to continue to grow on the global scene, and further establish its presence in India, a country of 1.3 billion people. The Singapore-based MMA promotion has previously signed a contract with broadcasters Star Sports for all of their events.

ONE’s Chief Commercial Officer Hari Vijayan, explained in the interview with Hindustan Times, how their recent popularity increase in India is just the beginning.

“We see a huge potential in the long term in India,” he said. “If you look at other sports beyond cricket, there is kabaddi, there is soccer. There are things happening in India for the new-age millennials. And I think we are at the right moment to capitalise on sports beyond cricket. We brought about our formula of values, hero building, and storytelling to India in a big way starting last year.

“In the 12 months, we have seen our viewership increase almost 30 times,” Vijayan continued. “We also have our Indian heroes like Ritu Phogat or Arjan Bhullar, so there is a lot of national pride. We think martial arts is just getting started in India, we are creating a platform and a young cool vibe and we are doing it through storytelling.”

“From day one our mission has been to unleash real-life superheroes who ignite the people with dreams and hope,” he said. “We are not selling fights, we are asking people to watch fights. We are selling inspiration. We are having people in India, seeing stories of their role models.

“Potentially also seeing kids having posters of someone like Ritu Phogat. What we are going about when we project matches in India is built upon some of the great Indian values like integrity, humility, respect, honour, courage, and compassion. That’s what we want to showcase, not people going at each other. That is a new approach we are taking.”

ONE Championship has been quite successful with that approach so far, if we look at the numbers.

“We had 20 million viewers when we launched last year,” Vijayan said. “Now in the middle of 2020, we already see a 30-fold increase. We are very excited about its potential. India has a billion-plus people. We had 280 million unique viewers across the world. In India also, we have content in Hindi. We want to attach ourselves to the heart and emotions of people. Another interesting fact about India is 50 percent of our audience is female.”

In addition, ONE Championship has announced the launching of the well-known ‘Apprentice’ series with its founder and CEO Chatri Sityodtong. Vijayan gave some insights on how the offer for the show came about, and expressed the honour of having the Indian entrepreneur Ankiti Bose as one of the contestants.

“We are someone who innovates. When Covid happened, all live sports were cancelled. We as a company have a relentless spirit of innovation. Martial art matches have taken a backseat due to the situation. MGM studios approached us and wanted to make ‘Apprentice’ a household name in Asia. So they brought in Chatri Sityodtong. He is dynamic, young, and has an amazing personality. He also has a fascinating story himself. 16 contestants will fight out for a dream job to be Chatri’s protégé and 250,000 dollar job offer.”

“Ankiti Bose is the only Indian to almost build a unicorn. She is housed in Singapore and she also has an amazing story. At the age of 22-23, she built Zilingo. We are really proud of having an icon like her on the show.”

Beside the heavyweight sensation Arjan Bhullar, ONE Championship has a massive Indian star Ritu Phogat on the roster. And Vijayan said she was the one who they targeted as the main Indian hero.

“Ritu is a competent athlete but her family legacy also made us want to have her. We wanted a hero to light up India and Ritu was our choice after an extensive study. Better still that she is a woman who stands for so many amazing things like female empowerment and gender disparity.”

Vijayan added that they plan to launch ONE Hero series in India in order to build-up young talents and provide a valuable career path for the best mixed martial artists.

“We want to show that martial arts and working for ONE Championship are a great career option,” he said. “We have a series called ONE Hero series, which is live in China and are going to launch it in Thailand and Indonesia later this year. The same plan for India.

“The whole genesis for that is to go into the grassroots, go into the local gyms, work with local promotions, and create tournaments. We want to give a platform and voice to the existing talent. The cream of the cream is what we want and we are going to create forums around that. We want to create regional tournaments like cricket.”

Would you like to watch ONE Hero series in India?