ONE: Inside The Matrix Preview 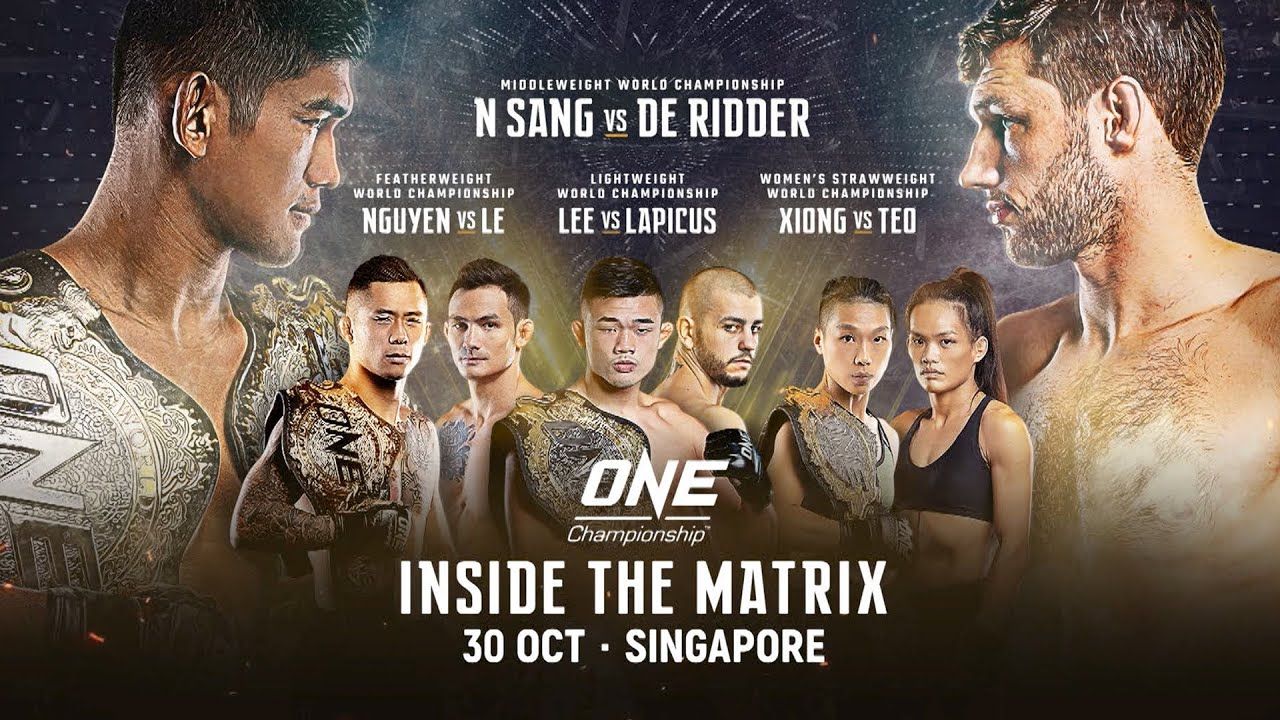 ONE Championship returns to the Singapore Indoor Stadium on October 30th, with ONE: Inside The Matrix, a card headlined by no fewer than four world title fights.

In addition, the lightweight, featherweight, and women’s strawweight belts will be on the line, with champions Christian Lee, Martin Nguyen and Xiong Jingan defending their titles.

Two high stakes non-title bouts round out a six-bout, all MMA card.

In the ONE: Inside The Matrix main event, current middleweight and light heavyweight champion Aung La Nsang puts the former on the line, against undefeated Dutchman, Reinier De Ridder.

‘The Burmese Python’ fights for the first time since defending his light heavyweight title with a second round TKO over Brandon Vera at ONE: Century a year ago. The 35-year-old is riding a seven-fight win streak across both weight classes and is 11-1 in his 12 ONE appearances, dating back to 2014.

The challenger, known as ‘The Dutch Knight’, is 12–0 and fresh off a decision win over hulking Brazilian Leandro Ataides in a title eliminator at ONE: Warrior’s Code back in February. 30-year-old de Ridder is 4-0 in his ONE tenure thus far, but Nsang is yet another step up in competition.

De Ridder presents an awkward proposition for Nsang, given his grappling-based style and heavy top game. The challenger will look to rush his Burmese counterpart and use his body lock takedowns to take the fight to the floor.

Nsang has made a habit of fighting standing up of late, scoring TKO victories in his last five bouts. However, he has 12 submission wins on his record, including three under the ONE banner, so he is no stranger to the ground game.

The ONE lightweight title is on the line when 22-year-old sensation Christian Lee faces undefeated Moldavian challenger, Iuri Lapicus.

The reigning champion and ONE Lightweight Grand Prix winner Lee is coming off a decision win over Turkish challenger Saygid ‘Dagi’ Arslanaliev at ONE: Century. However, if was in May of that year that ‘The Warrior’ marked his biggest career victory to date, defeating Japanese legend Shinya Aoki by TKO to claim the title at ONE: Enter The Dragon. The younger brother of ONE women’s atomweight champion Angela Lee is currently riding a four-fight win streak.

Lapicus is in action for the first time since February, when he defeated Russian veteran Marat Gafurov at ONE: Warrior’s Code via rear naked choke. The Italy-based 25-year old has enjoyed a fast rise to title contention, and is 2-0 in his ONE career so far, since signing with the promotion in 2019.

Both men are known for finishing fights, with Lee only going the distance in two of his 16 career fights, while Lapicus has scored first round finishes in both of his fights inside the ONE Circle.

Lee is an explosive and well-rounded fighter, with eight wins by submission and four by TKO on his record. All of his fights so far have taken place with ONE.

Lapicus trains with Giorgio Petrosyan, one of the world’s most accomplished kickboxers, so is comfortable standing up. However, his wins so far have taken place on the ground via rear naked choke, or ground and pound.

A highly anticipated featherweight matchup is also on tap, with champion Martin Nguyen defending his title against a former contestant on ‘The Ultimate Fighter’, Than Le.

Nguyen has won his last two fights since a decision loss to Kevin Belingon at ONE: Reign of Kings back in 2018. The Australian-Vietnamese is a ONE veteran with a record of 10-3 in the promotion, including signature wins over Christian Lee (twice) and Eduard Folayang.

The American-Vietnamese Le returns to ONE having won his first three fights with the promotion, since a TKO loss to Kevin Aguilar under the LFA banner in 2018. The Louisiana native has finished all three of his ONE victories with strikes.

Nguyen is a known finisher, having finished all but one of his career wins via a mix of strikes and submissions. ‘The Situ-Asian’ will hold a grappling advantage over the Taekwondo specialist Le.

The 35 year old Le will has finished all of his career wins, with only one of those wins was via submission. His main advantage should be in the stand up, where he possesses a broad kicking arsenal.

In the women’s strawweight division, longtime reigning champion Xiong Jingnan looks to defend her title once again in a rematch against Tiffany Teo.

China’s Xiong will look to defend her title for the fourth time against the opponent she defeated back in 2018 to claim the inaugural title. The bout will be ‘The Panda’s first since a move down to atomweight ended in a submission loss to champion Angela Lee at ONE: Century. And her first since moving from Bali MMA to Evolve MMA in Singapore.

Singapore’s Teo, was last in action in February, where she scored a TKO victory over Ayaka Miura at ONE: King Of The Jungle, to earn her title shot. ‘No chill’ is 6-1 in her ONE career so far, with her only career loss coming against Xiong.

Former ONE lightweight champion Eduard Folayang will look to insert himself back into title contention, when he faces Australian prospect, Antonio Caruso.

Team Lakay’s Folayang has been a mainstay of ONE since fighting in the promotion’s first ever main event back in 2011, but has gone 1-3 in his last four starts. The Filipino’s last appearance was a split decision loss to Pieter Buist at ONE: Fire And Fury in January.

Caruso was unsuccessful in his ONE debut back in October 2019, also a decision loss to Buist at ONE: Dawn Of Valor. ‘The Spartan’, who trains with Aung La Nsang and Martin Nguyen at Sanford MMA, was undefeated back in his native Australia prior to the bout.

The opening bout of ONE: Inside The Matrix features two up-and-coming women’s atomweight prospects, in a classic grappler vs striker.

India’s Ritu Phogat has won her first two professional bouts, both with ONE, the first of which was a first round knockout win over Nam Hee Kim back in November 2019 at ONE: Age Of Dragons.

Cambodia native Nou Srey Pov also has two professional MMA bouts to her name, a win and a loss. Both of her bouts have gone the distance, the most recent a loss to Priscilla Hertati Lumban Gaol at ONE: For Honor in May 2019.

Phogat is a former wrestling world champion, coming from a famed wrestling family in India. While Pov comes from a striking background.

Who do you think will emerge victorious at ONE: Inside The Matrix?