ONE On TNT 1 Results, Replay And Post Fight Videos 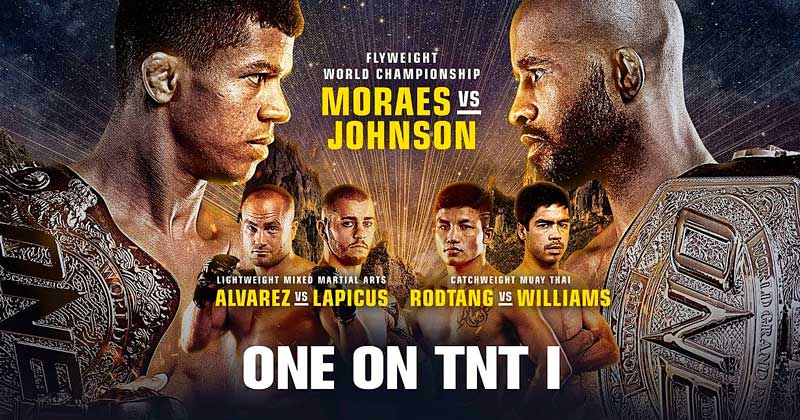 ONE on TNT 1 goes down Thursday morning at the Singapore Indoor Stadium, and will be the promotion’s first event to be broadcast live on primetime in the US on Wednesday night. In the main event, Demetrious Johnson challenges Adriano Moraes for the flyweight title.

It’s been over two years since Moraes last fought, when he reclaimed the title from Geje Eustaquio at ONE: Hero’s Ascent. Johnson signed with ONE at the end of 2018 and went on to compete three times in 2019, all of which were in the ONE Flyweight World Grand Prix. By beating Yuya Wakamatsu, Tatsumitsu Wada, and then Danny Kingad in the final, ‘Mighty Mouse’ earned his title shot.

Moraes and Johnson were originally scheduled to face off a year ago but the title fight fell victim a couple of time due to global restrictions brought about by COVID.

In the co-main event, Eddie Alvarez faces the number two ranked ONE lightweight Iuri Lapicus. ‘The Underground King’ hasn’t fought since ONE: Dawn Of Heroes almost two years ago, when he came from behind to submit Eduard Folayang. The 25 year old Moldavian is coming off the first loss of his career, which came while challenging for the lightweight title at ONE: Inside The Matrix against Christian Lee.

ONE Muay Thai flyweight champion Rodtang Jitmuangnon is set to face Australia’s Danial Williams, who stepped in on short notice after Jacob Smith was forced out due to travel restrictions between the UK and Singapore. ‘Iron Man’s’ title won’t be on the line in the catchweight bout.

Elsewhere on the card, former title challenger Tyler McGuire takes on Raimond Magomedaliev in a crucial welterweight matchup, Chingiz Allazov makes his promotional debut against Enriko Kehl in a featherweight kickboxing bout, and Oumar ‘Reug Reug’ Kane and Patrick Schmid meet in a short notice heavyweight clash after both men lost their opponents during fight week.

ONE On TNT 1 Results:

ONE Championship returns next Wednesday/Thursday with ONE on TNT 2, which will see Christian Lee defend his lightweight title against Timofey Nastyukhin in the main event.