ONE: Sage Northcutt Plans To Move Down Two Weight Classes 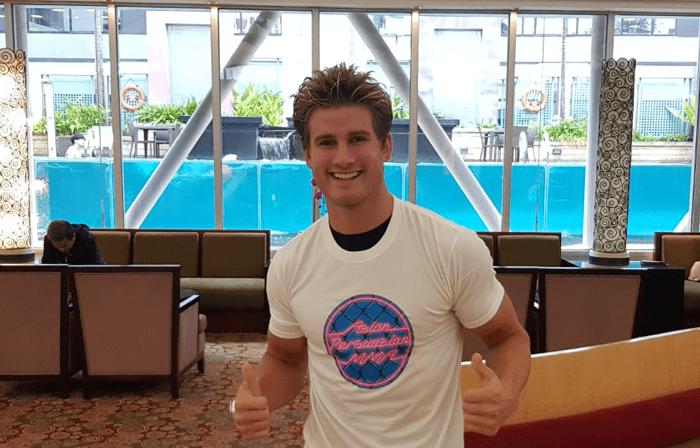 It’s been six months since Sage Northcutt was knocked out by Cosmo Alexandre in his ONE Championship debut. The extent of the injuries the 23 year old suffered to his face were so bad, he is yet to be able to return to training.

Despite the time away from the gym though, Northcutt has remained his usual positive self. Ahead of ONE: Edge Of Dragon, where his sister Colbey is set to make her ONE debut, we spoke to Sage, who gave us an update on his recovery.

“I’m doing great, healing up still,” Sage beamed. “I know it’s only been a little over five months. Just healing up, getting better, waiting for the doctors to give me the okay to start training MMA again, and getting back into it.”

Not deterred from the eight fractures to the face he suffered this past May at ONE: Enter The Dragon, Sage stated that he’s ready to compete again, as soon as the doctors give him the all clear.

“I’m hoping for sometime at the beginning of next year. I’m just waiting for them to give me the alright, to be able to do it. I can’t wait because when I’m ready to, I’m ready to fight.”

After lessons learned last time out, Sage explained that he intends to move down not one weight class, but two. This would be 155lbs, which is featherweight in ONE Championship.

“I guess fighting at a different weight class was a major thing I learned, going up to 185 [pounds – welterweight in ONE]. I know there’s no weight cutting but the 185 class is still too big for me. My frame is not for that weight class,” Northcutt proclaimed. “So I learned that I’m going back down to 155, where I was undefeated. So the featherweight division, for ONE.”

Although it’s not possible to cut a huge amount of weight in ONE, due to the two hydrations tests during event week in ONE’s weigh-ins system, it is possible to cut down some weight in the weeks leading up to the event.

And it won’t just be a different weight class we’ll see the American return to, Sage promised that we will see a lot more tricks up his sleeve.

“When I was healing up after my surgery, and I was rethinking everything over, I have a lot of different tool sets in my arsenal that I don’t use. And a lot of my main strengths and abilities, I don’t use, and I haven’t for any of my fights. I don’t know why.

“I guess you get used to going out there and winning a fight. You always try to do the same thing. But I have so many things fighters haven’t really seen me do. And my true strengths that I don’t do, because sometimes I don’t do them in sparring because you’ll hurt your opponent. I’m definitely going to use them when I fight again. That’s what I’ve been thinking about,” Sage told us.

When asked about UFC president Dana White’s comments that it’s time for Northcutt to retire, Sage said that he took Dana’s comments as a ‘nice compliment’.

“I’m thinking the positive out of it. He was saying I could retire. I took it as a compliment. For him saying that, I can do other things. I can go out and do acting. I can do modelling, as someone was saying. Or different things, or engineering, which is what I was at school for. That’s a really nice compliment, that I don’t have to fight. But I thing is, I grew up fighting and I have a passion for that. So when I’m healed up, I want to fight and be able to do that.”

Sage Northcutt’s sister Colbey faces Putri Padmi in a mixed martial arts bout at ONE: Edge Of Greatness, on Friday night at the Singapore Indoor Stadium.


Check out all our pre-bout interviews ahead of ONE: Edge Of Greatness here: