Petchdam Has His Father To Thank For His Dreams Coming True 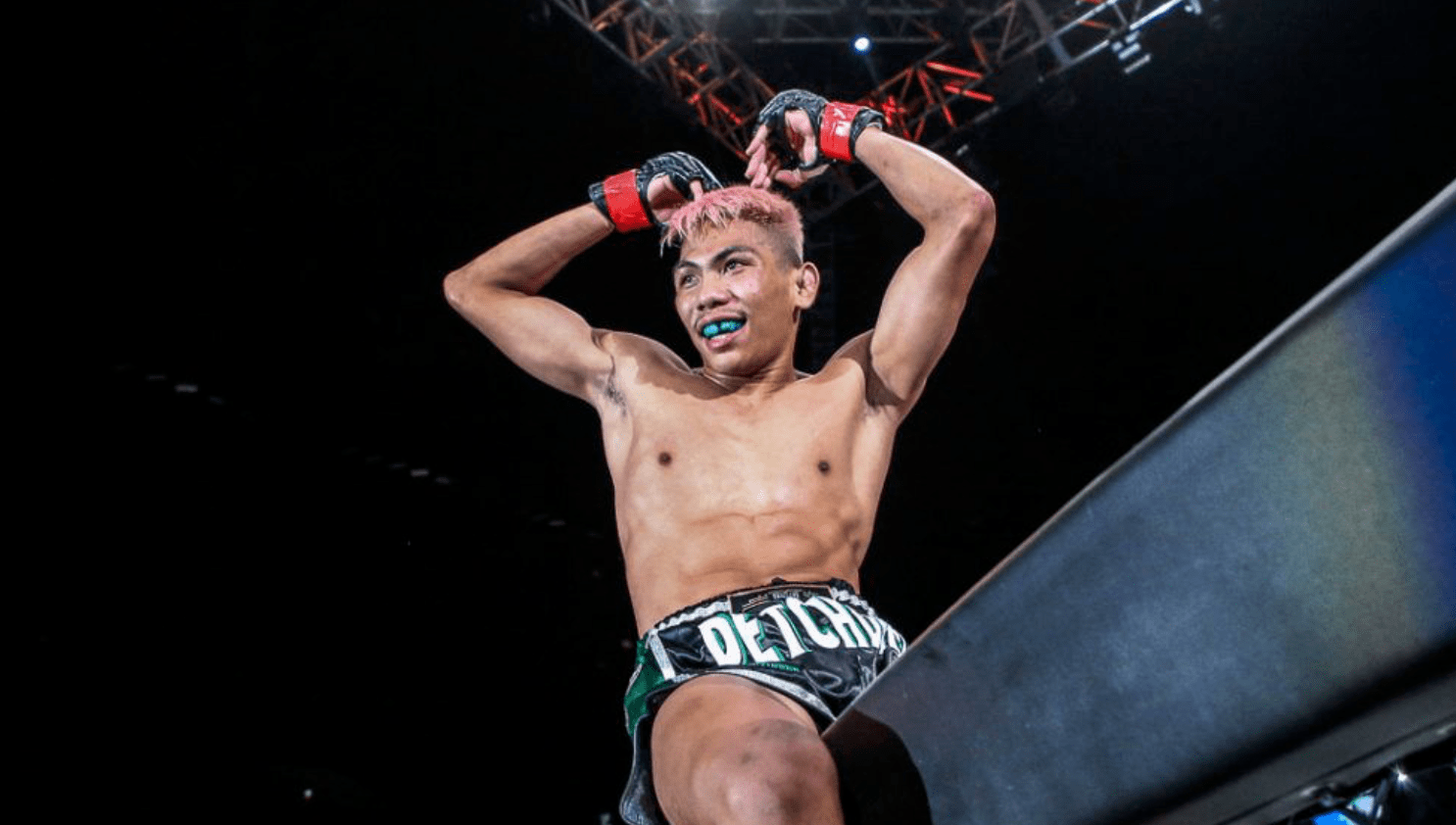 Like many kids in the Northeastern province of Ubon Ratchathani, Petchdam Petchyindee Academy dreamed of becoming a Muay Thai fighter. At this point, he has reached superstardom in his career. And no one has been at his side longer than his father, Surasee ‘Ceing’ Wongkhan.

At ONE: No Surrender on July 31st, Petchdam will have the biggest fight of his career when he challenges compatriot Rodtang Jitmuangnon for the ONE flyweight Muay Thai title. It will be the third fight between the two Muay Thai superstars. For ‘The Baby Shark’, he wouldn’t be where he is today if it weren’t for his father. He told ONE Championship how his father stuck with him the entire time on his journey to greatness.

Beginning Of A Dream

The 22 year old recalled how Muay Thai brought him and his father closer together when he was a child. Whenever Muay Thai fights were being aired, the two would gather in front of their television set. It was there where Petchdam’s dream of becoming a fighter was born.

“There were matches every weekend, and they were on TV,” recalled Petchdam. “I laid down beside my dad, watching with him every weekend. When I watched it, I thought to myself that I wanted to be that guy fighting on TV. I wanted to be on TV because I thought I’d look so cool. It was his dream that one day I too would fight on TV.”

Father and son began attending local Muay Thai events in their home province. Later on, Petchdam eventually started training in Muay Thai at the age of eight years old. Despite his lack of experience and without access to a proper gym, ‘Ceing’ served as his first coach.

It wasn’t long before Petchdam had his first fight. At the Songkran Festival he competed with other fighters his age. His lack of proper training showed however, and he went on to lose his first three fights.

“My first bout was when my dad took me for the dual trial in the neighborhood. He asked me if I wanted to join and I said, ‘Yes.’ So, my very first bout was at that Songkran Festival event.”

Knowing that his son couldn’t develop without proper training and a legitimate gym, ‘Ceing’ decided to take the next step to help Petchdam achieve his dream. The pair paid a visit to the only Muay Thai gym in their village.

“My dad got me in at the Sit Ood Piboon gym near the house to get proper training with professionals. They taught me the right techniques and there were many training buddies as well.”

At Sit Ood Piboon, Petchdam was receiving an entirely different style of training. He also had access to training equipment he never had before.

“When I trained in the camp, it was full of various pieces of equipment. I got stronger because of the bar training and weight training. There were coaches and training buddies to teach all the techniques, so it was definitely different.”

Despite the improvement, Petchdam opted to take a break from Muay Thai when he was 13 years old. During this time, he found it difficult to balance his training with school life. Torn between the two, his father would let him choose between what he wanted most at the time.

“When I was in seventh grade, I had to go to school and train Muay Thai. I had to wake up at 5am [for training], and I had to finish training before 7:30 am in order to get ready and go to school. I had to be at school exactly by 8am. I could rarely make it on time, and I always got punished for being late.

“I would get really tired and often dozed off at school. Some days, I felt too tired and didn’t want to go to the classes. I got fed up for being punished too often. It was exhausting [trying to manage my] training and studying. Since it was too tiring for me, my dad made me choose one thing I really wanted to do – either study or do Muay Thai. So, I told him I wanted to pause Muay Thai and finish secondary school.”

Petchdam got to focus on his studies and enjoyed his teenage years. But he found that there was a void in his life while he was no longer practicing Muay Thai. He even got nostalgic whenever he watched televised fights with his father. Upon graduating from school, he had another conversation with his father.

“I told my dad I wanted to go back to Muay Thai. My dad took me to see the owner of Sit Odd Piboon, the first camp that I trained with. But they sent me over to Petchyindee Academy.”

With that said, ‘The Baby Shark’ immediately jumped at the offer to train and compete in Bangkok. But he also made one more promise to his father.

“[I said], ‘If I don’t get any championship titles or I am not famous, I won’t come back,” the Petchyindee Academy representative recalled.

When he arrived at Petchyindee Academy, Petchdam was only 16 years old. There, he began his training in order to compete in the Bangkok stadium circuit. Before long, his and his father’s dream would come true.

“I got a fight on True4You TV as part of a smaller Petchyindee promotion. It was a five-round Muay Thai fight against Manachai Lukmakamwaan. I won the bout on points. My dad was really excited. He told everyone in the village I was fighting and asked them to watch and cheer me on.

“After the fight, he called to ask if I was okay – if I had gotten hurt. I told him I was fine, and he told me to do better next time and that I needed to keep working hard, and stay focused. I was really happy to make my dad’s dream come true. I will never forget that fight.”

While he was experiencing success, Petchdam began to feel the city living pay a mental price. It wasn’t long before homesickness took over. ‘The Baby Shark’ decided to return home for a while.

“I was homesick. Even though I didn’t have anything that I promised my dad, I went home. I just went there to rest and get my family’s support. Training here was very tiring. It was exhausting. But my dad gave me moral support on the last day to return to the camp. My dad said to me to keep fighting and that I will achieve my goal if I focus enough.”

With the support from his father, Petchdam returned to Bangkok with more motivation. He racked up numerous wins at the prestigious Lumpinee Stadium and Rajadamnern Stadium. The highlight of his career was when he won the Thailand title and Lumpinee Stadium title in December of 2015. The win helped him fulfill the promise he made to his father when he left Ubon Ratchathani for Bangkok.

“I won by knockout in round five and I got the championship title. Then I went home to show my dad the championship belt. He was really happy that I finally achieved what I promised him [before I left for Bangkok]. My dad was happy and my mom was proud of me.”

He continued to add to his list of achievements with a Toyota Marathon Tournament title in November 2017 and a WBC Muay Thai world title in 2018. And of course, he won the ONE flyweight kickboxing world title at ONE: Warriors Of Light in May of last year.

Petchdam will challenge Rodtang for the ONE flyweight Muay Thai title and look to settle the rivalry between the two superstars. While his father won’t be in his corner on fight night, ‘Ceing’ will call his son on the phone for a pep talk before ‘The Baby Shark’ steps inside the ONE Circle.

“Even though he can’t make it, he calls me before every fight to wish me good luck and give me encouragement, and if I am fighting on TV, he never misses it. My dad reminds me to stay focused on my career, and to never forget who I am.”

Can Petchdam Petchyindee Academy beat Rodtang Jitmuangnon for the ONE flyweight Muay Thai title at ONE: No Surrender?