Poirier and Gaethje Argue Their Cases To Fight McGregor And Khabib 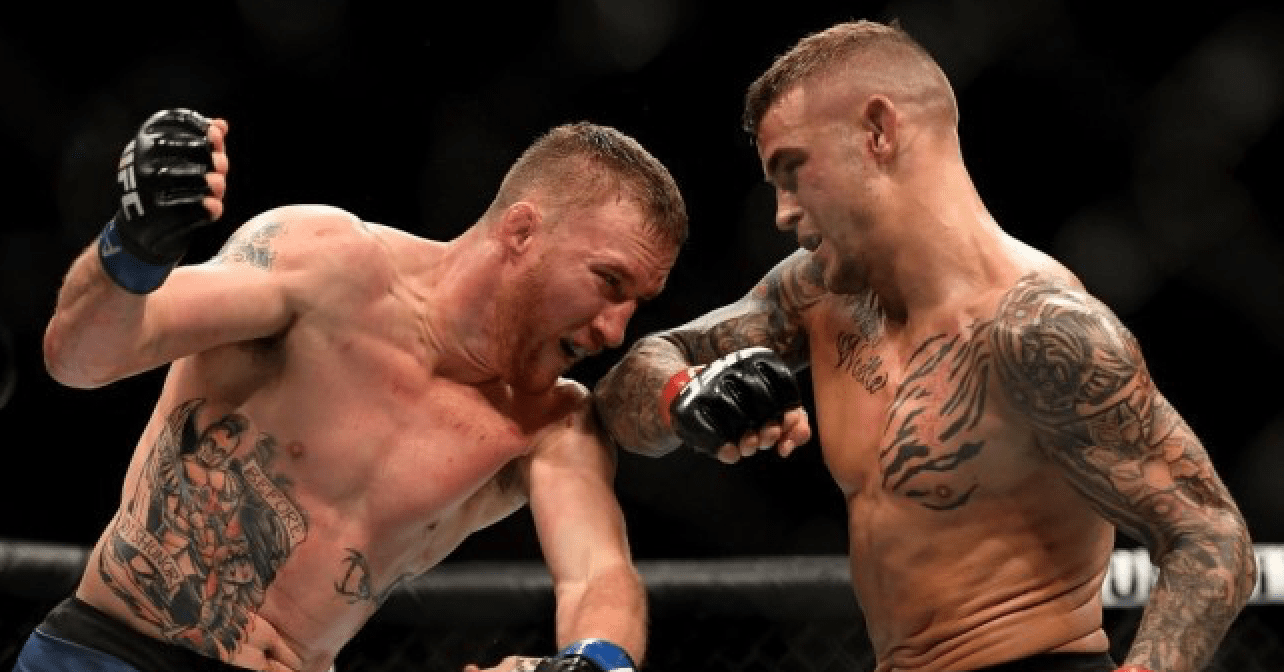 2020 promises to be a fun year in the UFC lightweight division. We now know that the UFC is working on Khabib Nurmagomedov vs Tony Ferguson for April 8th. And behind the top two 155 pounders in the world, we have the likes of Conor McGregor, Dustin Poirier, Justin Gaethje and ‘Cowboy’ Cerrone jostling for a title shot next year.

After a messy few years in the UFC lightweight division; which saw McGregor disappear to box Floyd Mayweather whilst the champion, and then Khabib suspended for his part in the fracas that followed his win over the Irishman at UFC 229; some order is finally being restoring back to the division.

Having coming off his first loss since in over three years, Poirier is looking to return against a top contender in the new year, once he recovers from the surgery he had on his hip.

“I’ve actually been eating a plant-based diet to heal up. My body’s feeling great. I’m lighter than I usually am in camp right now. Everything’s going good. I’m staying positive and March or April we’ll be beating somebody up. I just want it to be the right name and I want it to make sense.”

When the 30 year old returns, he has a very specific list of potential opponents.

“When they offer me a name that gets me excited then that will be the right one. A Conor, a Nate Diaz, a Khabib, a Tony, those kinds of guys get me excited.

Since losing to Khabib, Poirier has campaigned for a rematch with McGregor. Since losing to Conor at UFC 178 in 2014, he has only lost to Khabib and Michael Johnson in twelve fights.

If Poirier is to rematch McGregor, he may have to wait in line. As it is thought that the former two division champion will face ‘Cowboy’ in early 2020. Although ‘The Diamond’ argues his case to welcome Conor back to the Octagon.

“I respect ‘Cowboy’ and everything he’s done but I do think he’s on the back end of his career. It’s ‘Cowboy’, he can show up and submit or knock out Conor as well. I’m not counting the guy completely out but I do think that is a more favourable fight for him on his return.

“Fight a guy who’s been KO’d or TKO’d twice in his past two fights. I’m not a matchmaker. I think me and [Conor] makes more sense.

“I think the fans want to see it as well but time will tell. I definitely want that fight, and it’s something I want to do.”

And Dustin Poirier isn’t the only UFC lightweight with big plans, Justin Gaethje has set his sights on the champion, Khabib. Speaking on Michael Bisping’s Believe You Me Podcast, the 31 year old said that fighting Khabib for the title is his main goal but if he has to face McGregor to get to him, then that would be the ‘cherry on top’.

“It’s more just the cherry on top, the sundae is the belt. I am trying to fight Khabib. Khabib has publicly stated that he doesn’t have very many fights left. So, I have to fight him before he goes away.”

And whereas no one has found the answer to Khabib’s relentless ground game inside the Octagon, Gaethje believes he has what his take to dish out the first loss of the champion’s career.

“I would refuse to fight on the fence. If he was to beat me, he would have to wrestle me in the middle of the Octagon and I would be trying to chop his leg off the whole time.”

Who would you like to see Dustin Poirier and Justin Gaethje fight in 2020?