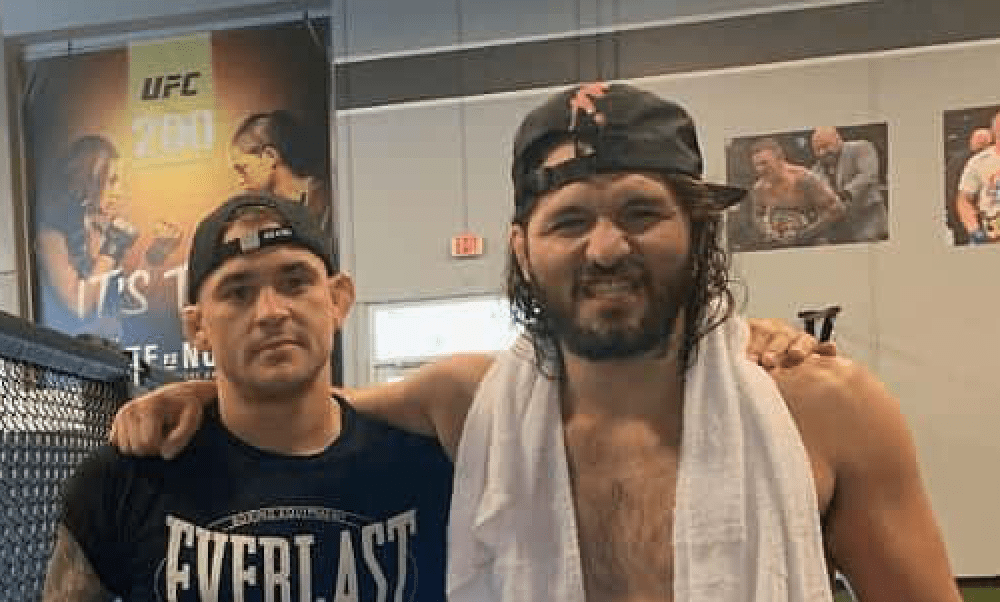 On account of Jorge Masvidal stepping-up on approximately one week’s notice to throw hands with Kamaru Usman, a lot of folks aren’t expecting ‘Gamebred’ to be at his best. But, recently his longtime American Top Team teammate Dustin Poirier, outlined why apparently, that’s not going to be the case.

Masvidal has been thrust into the headliner of this weekend’s UFC 251 card on Fight Island, after Usman’s initial opponent Gilbert Burns was forced out. Late last week, word came that ‘Durinho’ had tested positive for COVID-19, and a couple of days later, the BMF champ was signed to fight the welterweight champ.

Well, on account of the extreme short notice, the consensus has been that unless Masvidal gets to Usman early, he’s going to have a long night.

Recently, however, Poirier spoke with legendary boxing trainer Teddy Atlas, on his The Fight podcast (as transcribed by MMA Fighting). During the interview, ‘The Diamond’ reported that Masvidal helped him train, extensively, for his recent bout with Dan Hooker at UFC Vegas 3.

“It’s a short-notice [fight] because he didn’t have the contract signed, but let me tell you what, this guy was there my whole training camp, he was my main sparring partner,” Poirier said. “We probably put in five weeks of sparring together. He flew in wrestlers, the best wrestlers in the world. I think he put them up and the guys were there just for Jorge, just for Masvidal to use. The guy never stopped training. Even when the fight fell through and they gave it to Burns, I think it was at the end of my training camp, Jorge was still in the gym every day like he had a fight.”

The fact Masvidal helped Poirier prepare for his bout with Hooker isn’t a surprise. But to hear ‘Gamebred’ has been training like he had a fight coming up this whole time, is really intriguing. Given that not long ago, the veteran fighter was feuding with the UFC over his contract.

As a result of Masvidal’s recent training regiment, Poirier believes his friend is going to shock a lot of people on Saturday night.

“I don’t know if he knew something that we didn’t, but the guy was in training camp the whole time and never stopped,” Poirier said. “I think he’s going to surprise a lot of people with the kind of shape he’s in. His timing is gonna be good [because] he was in my camp the whole time, helping a few guys, not just me. He’s in fight shape, I know that much. This isn’t a guy coming off the couch. This is a guy who was preparing to fight Usman and the fight fell through and he kept training.

“Like I said, I don’t know if he just had a premonition, had a feeling, but he was in the gym nonstop, so I’m excited for him. He’s a good guy and a pioneer of mixed martial arts so it’s great to see him get these opportunities.”

Could it be the case that Poirier is just saying this in an effort to get in the head of Usman and help out his friend? It’s possible. It’s also very possible the former interim lightweight champ is telling the truth.

When it’s all said and done, we’ll likely get a much clearer sense of how much Masvidal’s been training at Friday’s weigh-ins and on fight night.

How do you think Jorge Masvidal will get on against Kamaru Usman in the UFC 251 main event?