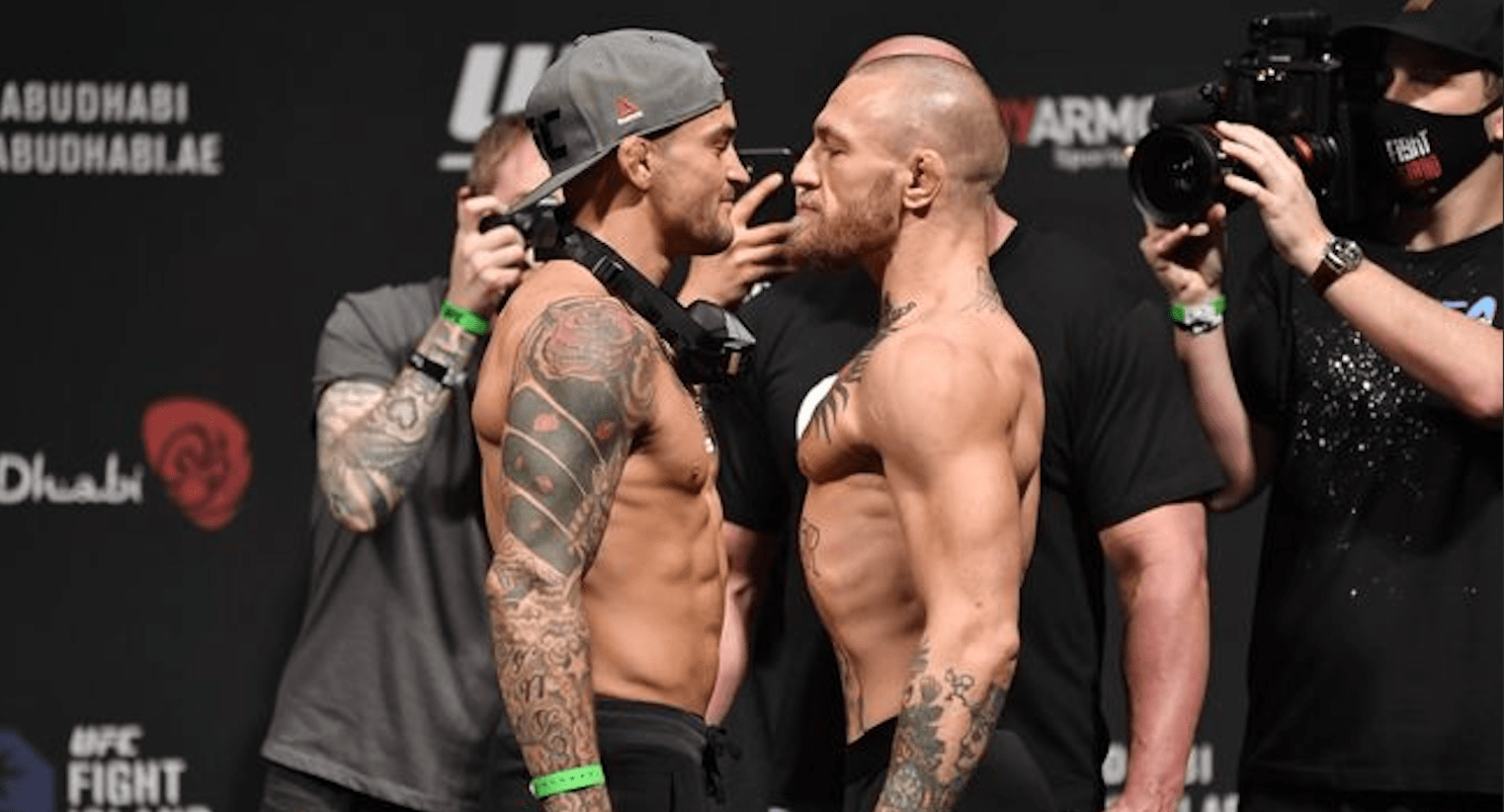 Dustin Poirier has warned Conor McGregor to expect more calf kicks when they face off in their rubber match. Although he expects the Irishman to utilise them himself when they meet in the UFC 264 main event on July 10th.

Poirier finished McGregor in the second round at UFC 257 to avenge his UFC 178 first-round TKO loss. ‘The Diamond’ landed numerous crushing calf kicks in the rematch, which compromised the former two division champion’s movement, allowing him to get the finish early in the second round.

‘McGregor Will Use Calf Kicks’

Speaking on ‘THE FIGHT with Teddy Atlas’ podcast (as transcribed by MMA Junkie), Poirier said that he expects McGregor to throw a lot of calf kicks in their trilogy fight.

“For me, whenever those low calf kicks first started getting more popular, and I’m a southpaw so for these calf kicks to work, it has to be against another southpaw,” Poirier said. “I fought Jim Miller a few years ago back in New York at the Barclay Center, and he was the first guy to use them against me, and after that fight, my leg was so damaged, I had a whole new respect for the calf kick, the low leg kick game, and I’m expecting Conor to do the same now.

“He felt how crippling those kicks and how painful those kicks are and how much it changes the dynamic of a fight that I think he’s going to try and use them against me now. I really do, and that’s what I started doing, I started trying to use them every chance I got after I was hurt with them.”

‘I’ve Got A Bag Full Of Tricks’

Poirier warned McGregor that he plans to use calf kicks once again in the rubber match, but insists that he also has ‘a tool bag full of tricks’ up his sleeve in preparation for the UFC 264 headliner.

“I’m working on still landing my offence with my low kicks, but now I’m working on defending a lot more than I used to,” Poirier said. “Just like in that fight, if he would have started checking those kicks, or if I would have been getting taken down because I was chasing that leg kick, then I would have called an audible and gone with something else.

“I just used them because they were there, it was damaging him, he wasn’t making the right decisions to start defending them, and I knew how much they hurt, and I knew it was going to change the fight. He wouldn’t be able to plant and throw. That power, his mobility would be taken away. The same thing in this one. If the kicks are there, I’m going to use them. If not, I’ve got a tool bag full of tricks that I can’t wait to show you guys.”

Who are you picking to win when Dustin Poirier and Conor McGregor face off for a third time at UFC 264?