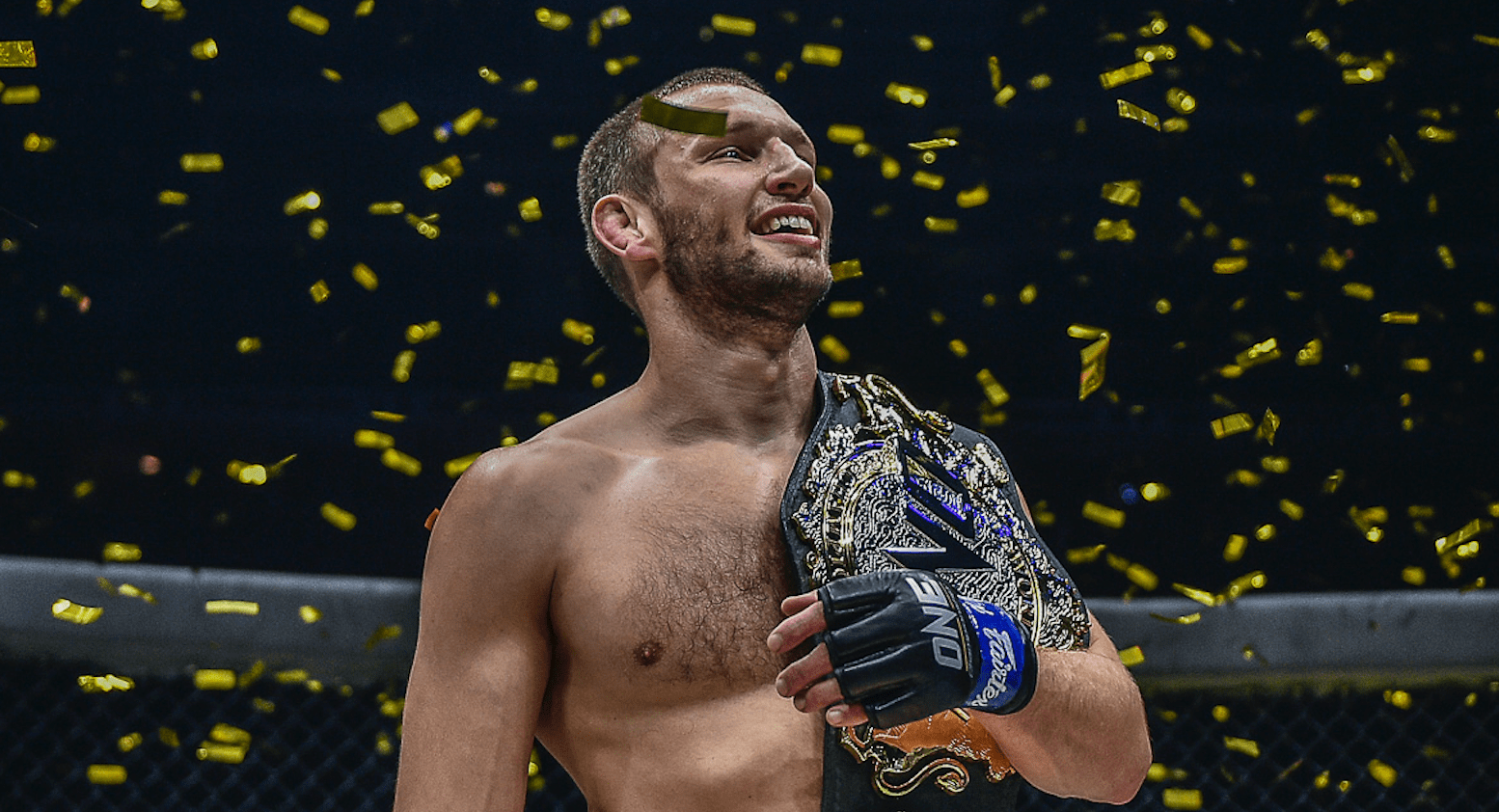 It’s been ten days since Reinier de Ridder pulled off the huge upset at ONE: Inside The Matrix, by scoring a first-round submission of Aung La Nsang to win the ONE middleweight title.

As the new champion, his next task is to defend his crown against the division’s best. In an exclusive interview with Asian Persuasion MMA, de Ridder said that he is still adjusting to his new status as world champion.

“It hasn’t really worn off yet,” de Ridder said. “It’s still pretty cool. It’s been so long in the making and to finally get here.”

Ahead of his title fight, de Ridder was making bold predictions, saying he would submit Aung La in the second round. While he stuck to his gameplan and made good on his promise, his prediction was not completely accurate.

“I said second round,” said de Ridder. “It went exactly as planned. This is a takedown I’ve been hitting a lot lately. I didn’t really plan to switch stances right away but I saw the opening, I switched and I was like, ‘Now I got him.’ And I stepped in and he sprawled very well. But once I got the body lock, I was like, ‘This guy is not going anywhere.’

“So I got the takedown pretty quick, got to the back and I heard my coaches yelling, ‘Four minutes left’ and I knew I had time to work so I was going to take my time. I wasn’t going to rush to choke [him]. Finally, I got it with 90 seconds left. So it was perfectly as according to plan.”

Despite getting the first round finish, de Ridder was particularly respectful of Aung La’s defensive skills, but stated that there was only ever going to be one outcome once the fight went to the ground.

“He defended pretty well,” de Ridder said. “He got the arm out the first time and he tried to stand up. He did the right moves. So that didn’t really surprise me. He’s a great grappler, a great wrestler. Very well-versed in every aspect of MMA. But on the ground, he’s in my world.”

The Dutch champion still believes he would’ve well had the fight remained in the stand-up. However, he chose to play to his strengths. Which also just so happens to be his favourite aspect of mixed martial arts.

“I’d be all right as well [if the fight stayed on the feet],” said de Ridder. “The uppercut grazed me a little bit because I stepped in. I felt I wasn’t in the right position so I leaned back, I stepped out again and the uppercut grazed me a little bit. I would’ve been okay with the stand-up as well. But there is no better way than to take him down and choke him out.

“I love jiu-jitsu and wrestling. I’m very happy to have been able to show that part of my skillset. Striking will come up again. I’ve always been working on it, I work on it very diligently. So I hope to showcase that again another time as well. But if I can, jiu-jitsu will always come first.”

Watching Back ONE: Inside The Matrix

Before going into his own fight, de Ridder had a chance to watch the title fights that were on the same card. To say the least, the 30-year-old was impressed and surprised by what he saw. He also took some time to analyze the lightweight title fight between Christian Lee and Iuri Lapicus.

“Martin Nguyen and Thanh Le was a very cool fight,” de Ridder said. “I watched it in the back while warming up. Martin had Thanh Le hurt but then he came back. It was very cool, very back and forth.

“Iuri and Christian Lee was kind of a surprise to me. This fight was also decided in the jiu-jitsu department. Because when Iuri got the reversal and went for the leglock, he didn’t get his leg positioning right. He was too sloppy with his legs. If he would’ve went for the footlock position, I think he would’ve survived there and maybe even finished him with the heel hook. But he went outside ashi [garami] and he should’ve gone inside 4/11. It’s a shame for him because he was 14-0. And to be put away in the first round. Christian Lee doesn’t stop to amaze. He’s a great fighter.”

However, de Ridder hasn’t watched his own fight back in its entirety, stating that he’s more focused on improving himself going forward.

“I haven’t really watched it entirely yet,” said de Ridder. “It’s done and it’s over. I don’t really like to watch it back too many times. It is what it is, it went all right. And now I would like to get back in and put some more work and get better.”

No Challenge In A Rematch

With the belt, the question now is, who does he want his first title defence to me against? With no obvious number one contender, de Ridder would ideally like to see Aung La face Leandro Ataides, and then fight the winner.

“To fight Aung La straight away again, doesn’t really feel like I can do a better job than I did,” de Ridder said. “In this fight, I didn’t get hurt. I finished him in the first round. Feels like, ‘What’s the challenge there?’ Can I do even better? I don’t think so. So for now, I don’t think that really excites me.

“[Vitaly] Bigdash is an option but he’s been a little inactive and he’s canceled some fights. It’s not that exciting to me either. Ataides, I’d like to avoid. I think I would wait for them to have a fight. I would really like an Ataides-Aung La fight and then maybe fight the winner. That would be amazing to me. But I have to see what happens in the next few weeks.

“…it’s a little murky,” de Ridder continued. “There’s a lot of guys who are top-level, great fighters. I’m not really sure who the next guy is. I would like to see Aung [La] get back in there and prove himself. He wasn’t hurt as well, didn’t take a lot of damage. So I would like to see him get back in there in a few months. Ataides would be a great fight for him. If they can make that happen, that would be great. And maybe let me fight the winner.”

For his first title defence, de Ridder is hopeful that he can fight in a crowd-packed venue, where coronavirus protocols are no longer in place.

“I hope this stuff dies down a little bit,” de Ridder said. “I hope to be back with the crowd, with a fight week outside of my hotel room. I hope they find a clear-cut number-one contender before that. So hopefully, they fight in a few months and I’ll be back in half a year.”

Who would you like to see Reinier de Ridder defend the ONE middleweight championship against?