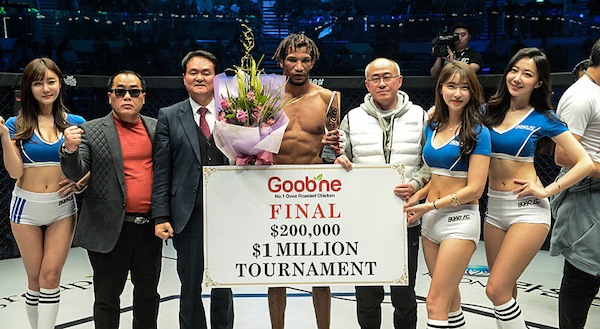 Shamil Zavurov and Mansour Barnaoui traded kicks and jabs to open, and as soon as Barnaoui became comfortable in the clinch, Zavurov went for his bread and butter takedowns. Barnaoui did what no man has done, and reversed out of them, and Zavurov did the same by breaking out of Barnaoui’s triangle.

The second round opened with Zavurov sniping and Barnaoui swarming in clinch, then a quicker takedown by Zavurov, with Barnaoui defending hard off his back. Barnaoui got to standing, landed a knee, and Zavurov went back for the double leg, which Barnaoui reversed at the bell.

In the third round, Barnaoui made magic. He timed a jumping knee perfectly and knocked Zavurov out cold!

Mansour Barnaoui has become the finalist in the $1 Million Lightweight Tournament: Road to A-Sol. He earns $200,000 for this victory. On May 18, on Jeju Island, Barnaoui will face ROAD FC Lightweight Champion Kwon A-Sol for the title and the conclusion: winner takes all!

Kim Min-Woo simply made no mistakes against his two-time rival, Moon Jea-Hoon. He stayed away from the first onslaught of high kicks, went for the takedown, and was able to maneuver into a triangle smoothly. In a win filled with emotion, Kim Min-Woo became the new ROAD FC Bantamweight Champion!

Bruno Miranda versus Hong Young-Ki was every bit as thrilling as expected. After an unfortunate groin shot that earned Miranda a yellow card and took Hong the full 5 minutes to recover, Hong violently surged back with two knockdowns. Miranda stayed in the fight, and returned the favor with punches that put Hong down and out.

Strikers Jang Ik-Hwan and Jang Dae-Young came out and unloaded sniper shots on each other, with Dae-Young ending the first round on top with ground and pound. The second round was more cautious from both, then switched up with crazy wrestling to open the third. Ik-Hwan surged back in the final seconds to seal the victory on the scorecards, where Dae-Young had points deducted for missing weight.

Kim Seung-Yeon brutally welcomed Ki No-Joo back to the cage with a huge first punch, first knockdown and ground and pound to finish in just seven seconds.

In the opening openweight match, Michel Pereira showed off back flips and spinning kicks against Kim Dae-Sung, who tried his best to get inside the much longer reach of the Brazilian. Hard shots were exchanged. Pereira came out to finish in the second, and let loose some knees that were too much for Kim.

In the Young Guns 41 main event, Yang Hae-Jun and Lim Dong-Hwan came out trading kicks, but once he was on the inside, Yang’s experience prevailed. He got a head and arm throw and worked strongly into an americana and got the tapout.

Jung Sang-Jin pressed the action in the first round against Shin Seung-Min and they came up with brutal clashes. In the second, An odd finish came about when Jung delivered a powerful knee that put Shin down, and the referee waived it off, to his protest.

Grappler Hong Jung-Gi was determined to get the fight to the ground, but Kim Tae-Sung had his number and was able to deliver a liver kick that won him the TKO in the second round.

Lee Seong-Su had a single leg takedown, then Hwang Chang-Hwan used a jumping knee to bloody his face. Hwang got a near submission off his back in the first round, and turned on the heat in the second with a knockdown and TKO by ground and pound.

Two new and skilled young bantamweights opened the card with an action-packed back and forth match that ended with Park Su-Wan earning a split decision over Lee Jeong-Hyeon.