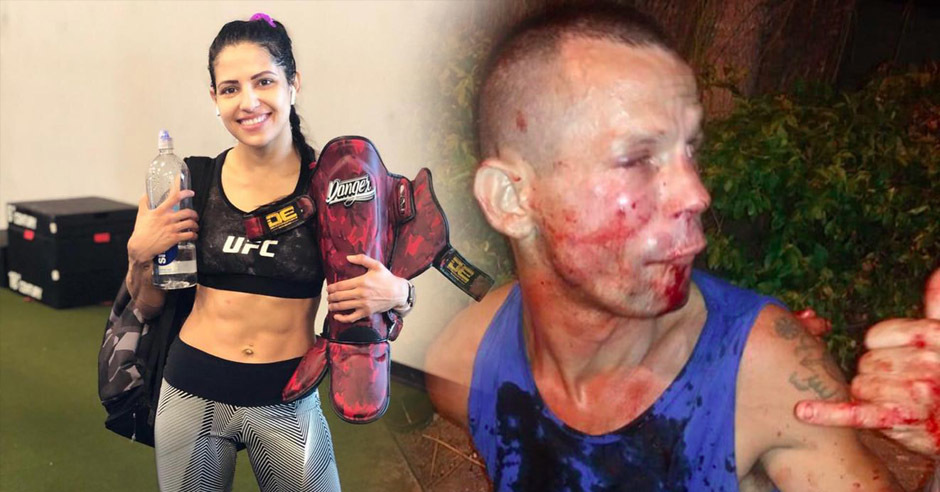 If you’re going to try and steal someone’s phone, it’s probably best that they’re not a professional fighter. Unfortunately for one man in Rio de Janeiro, that’s exactly what happened when he tried to steal UFC fighter Polyana Viana’s phone. Polyana was waiting for an Uber outside her apartment, when the unlucky robber approached her. As Polyana told MMA Junkie.

“When he saw I saw him, he sat next to me. He asked me the time, I said it, and I saw he wasn’t going to leave. So I already moved to put my cell phone in my waist. And then he said, ‘Give me the phone. Don’t try to react, because I’m armed.’ Then he put his hand over [a gun], but I realized it was too soft.

“He was really close to me. So I thought, ‘If it’s a gun, he won’t have time to draw it.’ So I stood up. I threw two punches and a kick. He fell, then I caught him in a rear-naked choke. Then I sat him down in the same place we were before and said, ‘Now we’ll wait for the police.’”

Despite the ordeal, Polyana managed to remain calm.

“I was fine. I was fine because he didn’t even react after. Since he took the punches very quickly, I think he was scared. So he didn’t react anymore. He told me to let him go, like ‘I just asked for the time.’ I said, ‘Asked for the time my ass,’ because he saw I was very angry. I said I wouldn’t let go and that I was going to call the police. He said, ‘Call the police, then’ because he was scared I was going to beat him up more.”

Dana White was certainly impressed with the Brazilian’s self defence skills, posting this:

On the left is @polyanaviana, one of our @UFC fighters and on the right is the guy who tried to rob her #badfuckingidea

This incident happened just days after it was reported that the former UFC heavyweight Denis Stojnic, came to the rescue of a woman being attacked outside of his nightclub in Sarajevo. You can see the video of that here.