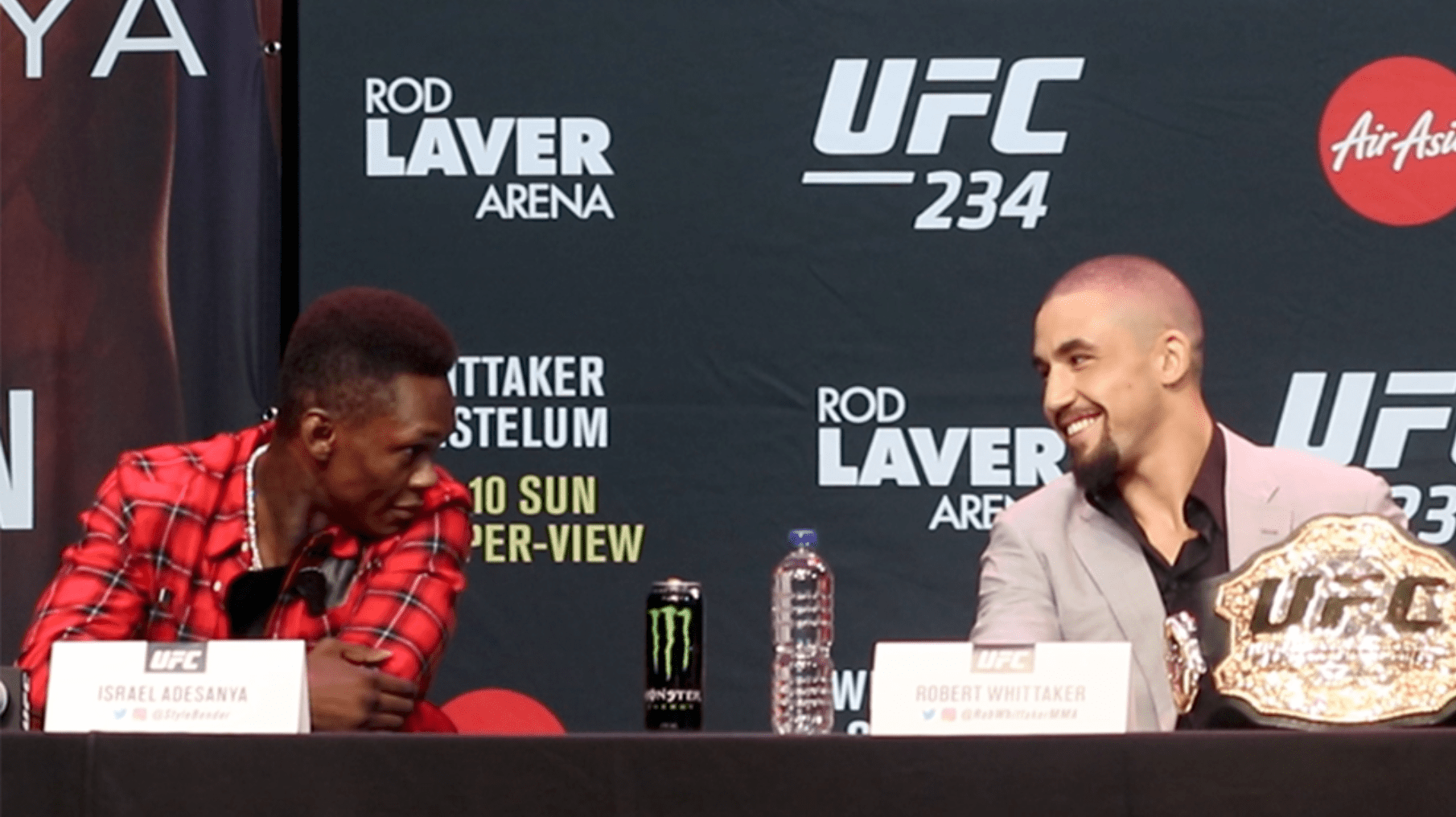 Robert Whittaker will defend his middleweight crown at UFC 243 against the interim champion Israel Adesanya. “The Reaper” hasn’t competed inside the cage since defeated Yoel Romero by split decision at UFC 225 in June 2018.

With his next fight coming up, Robert Whittaker’s longtime jiu-jitsu coach Alex Prates recently said that the current middleweight champion ‘is a better version’ of Georges St-Pierre.

“Maybe you’ll see Robert Whittaker using a style that I think is the one that suits him better but he never really needed it because it was always comfortable for him on the feet for most of his fights”, Prates told MMA Fighting. “With Yoel Romero, for example, it would have been stupid to try to take him down. But Robert has great wrestling and great timing. I honestly think Robert is a better version of GSP. And we might see this now.”

With GSP defeating Michael Bisping for the middleweight title couple of years ago, the fans expected to see the then interim champion Whittaker take on St-Pierre. However, GSP soon retired from the sport, making Robert Whittaker the undisputed champion.

And Whittaker’s coach believes that if Robert dictates the pace of the fight, he will put Adesanya under a lot of pressure.

“If Adesanya dictates the rhythm of the fight the way he likes to do, like he did against Anderson Silva, it’s going to be a good fight for him and he will probably win by decision”, Prates said. “Now, if Robert takes that away from him, his ability to dictate the pace, it will be bad for him. If they grapple, if there’s a bit of mixed martial arts in the fight, a bit of wrestling and striking, Robert won’t get tired.

“I think that Robert is technically superior on the ground and with his wrestling. I won’t say Robert’s striking is superior, but it’s definitely on the same level of Adesanya’s. I see many people saying that Adesanya is a better striker and I think that’s really unfair. If Robert hasn’t proved yet that he’s one of the best strikers of the division, I don’t know what else he needs to do.

“The main difference of Robert using his wrestling and ground game with Israel is that he doesn’t depend on the ground, if that makes sense. He can take Israel to the ground, but if Israel starts to scramble and gets back up, he doesn’t need to spend energy there. Let him get back up. That’s the difference from a jiu-jitsu fighter or a wrestler that depends on keeping him on the ground. That might get Israel worried about the takedowns as well, which makes it easier to land combinations on the feet. And also get him tired.”

Prates knows the magnitude of the fight, but at the same time, thinks beating Adesanya won’t be as big of a feat as defeating Romero twice.

“Robert defeated Romero twice. If you ask my personal opinion, my understanding of MMA, defeating Romero twice is a bigger feat than defeating Adesanya”, Prates said. “Israel definitely is a star here, but I think there’s a misunderstanding when people say he’s a new prospect. He’s older than Robert, he’s a veteran with more than 60 kickboxing fights. He’s super experienced, and that’s how we look at him. We don’t think his ground game is bad, that his wrestling is bad. He’s a MMA fighter. I just think that Robert combines it really well. When he combines his striking and wrestling, he’s really hard to read.”

“The Reaper” was originally scheduled to fight Kelvin Gastelum back in February, but had to pull out at the last minute. However, Robert Whittaker’s coach believes that he is in better shape than even before.

“I’m not trying to sell anything here, but he’s more fit than every other fight he’s been to”, he said. “He’s way better technically than he was when he fought Romero, and I’ve never seen him so strong and in such good shape. His conditioning is phenomenal. He won’t get tired in this fight. He’s super confident, and that’s what makes him a champion.”

Considering Whittaker had to pull out of fights due to injuries before, Prates also said the champion isn’t thinking about the past.

“That’s not something he’s concerned about, but that’s something Fabricio (Itte) and I are concerned. That’s our main concern”, Prates said. “If he doesn’t fight this time I’m not training him anymore, I’m quitting. We’re putting him in a bubble. He will show up to fight. We’re being very careful.

“I’m not trying to avoid responsibilities, but last time it was something we couldn’t know”, he continued. “He had complained about abdominal pain a month before the fight, he couldn’t sleep, and we took him to the doctor to do a scan, but his hernia was behind the intestine and the doctor couldn’t see it. His diagnostic was food-related so we changed his diet. It was our mistake. If someone has to own it, it’s Fabricio and I, but it was hard, it could have happened to anyone.

“But the Rockhold fight, I’ll definitely raise my hand. It was a staph infection, that’s our fault. So it’s a pressure we have over ourselves. Not him, but his coaching staff. Our priority today is making sure he shows up to fight.”