Santiago Ponzinibbio Is Willing To Fight His Teammates 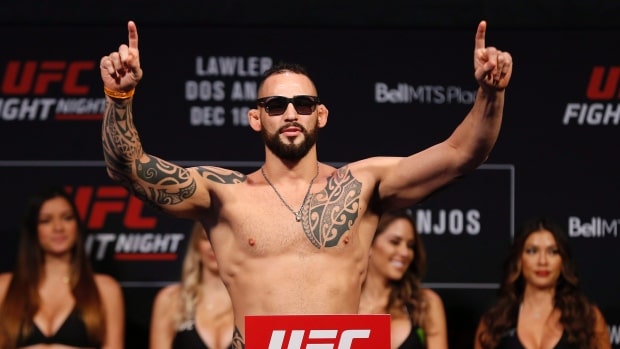 Whereas many fighters wouldn’t even consider fighting one of their teammates, Santiago Ponzinbbio has said that he wouldn’t have a problem fighting his American Top Team teammates, Colby Covington and Jorge Masvidal.

Ponzinibbio is currently the number eight ranked UFC welterweight. While Covington and Masvidal sit ahead of him, ranked number two and five.

Speaking to The Body Lock, the Argentine made it clear when asked, that he would definitely fight his teammates for a title shot.

“For sure, if it’s for the title shot, we’ll fight man. It’s a team but it’s a dream to each guy. It’s good for the gym too, you know? A lot of good contenders and prospects. Before the title, we fight, we know that.”

Ponzinibbio’s number one target right now though, is the former champion, Tyron Woodley.

“Maybe I need to fight a top-five guy and I think Tyron Woodley is a good option. It’s a good fight, good matchup. I know I can finish anyone in this division. I believe in my power, my work, I work very hard for a long time. I’m ready and excited to be back.

“This division, I think, is the most exciting division. A lot of good guys, a lot of high-level guys but I’m ready to make history. I think Tyron Woodley is a really exciting fight.”

Although the 32 year old has his sights on Woodley, he believes he’s ready to dethrone the new UFC welterweight king, Kamaru Usman.

“I know I am ready to finish Kamaru Usman. I have the level to do that but I need the opportunity,”

Ponzinibbio is currently on a seven fight win streak and is coming off of an impressive KO finish over Neil Magny, last November.