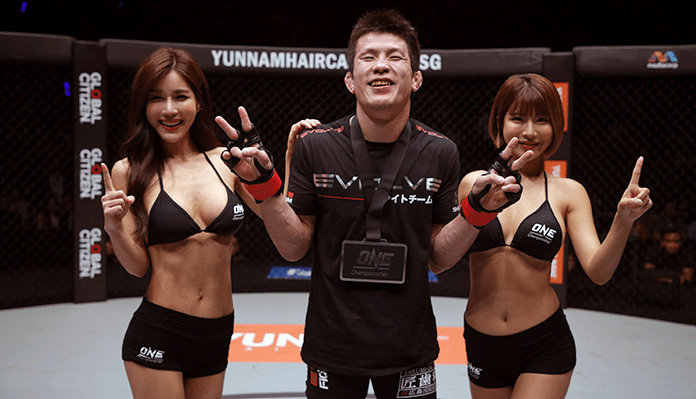 Coming off a remarkable performance at ONE: A NEW ERA in Tokyo, Japan where he was able to capture the ONE Lightweight World Title for a second reign, Shinya “Tobikan Judan” Aoki of Japan is slated to return to action once more and defend his title this Friday, May 17th.

The man known as the ‘Grandmaster of Flying Submissions’ faces rising young star Christian “The Warrior” Lee, in the main event of ONE: ENTER THE DRAGON, which takes place at the Singapore Indoor Stadium.

But before he steps into the Circle anew, Aoki looks back at his title-winning performance in front of his hometown crowd at the Ryogoku Kokugikan.

“Putting aside the fact that I won or won a belt, the fact that the event was a success and that people left saying, ‘That was fun,’ was the best thing for me,” said Aoki.

“So many people came to Tokyo to see the fights and all the Japanese athletes before me had lost and I thought, at this rate, it will be seen as an Asian event, not a Japanese event. So, I wanted to win.

“Honestly, I felt relieved. I was relieved the event was a success and the audience was roaring with excitement.”

Immediately after Aoki defeated now former champion Eduard “Landslide” Folayang, the Japanese legend took the microphone at the post-event presser and proceeded to call out Lee, shocking many in attendance.

For one, Lee is a featherweight moving up a weight class. Secondly, he’s Aoki’s Evolve MMA teammate.

“He (Christian Lee) is the most promising athlete within Asia and within ONE, so, I want to test myself against him,” Aoki said.

“I’ve trained with him and seen him develop and I think right now he’s the strongest and most accomplished he’s been. He’s ready for a fight and I think he’s stronger than me.

“Being able to face such a young opponent, at the age of 36 years old, I get to put everything I’ve done up until now to the test by facing him.”

“Tobikan Judan” is well aware of the dangers Lee presents because they are well-acquainted.

When Aoki asked for the most serious challenge he could come across, not many were thinking Lee which came as a total shocker. Now with ONE: ENTER THE DRAGON barely a week away, and Aoki will soon get exactly what he asked for.