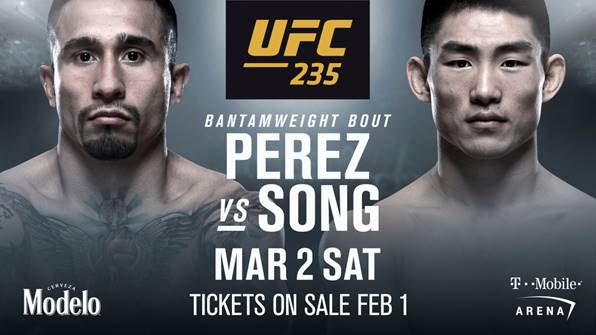 UFC 235 will roll out of the T-Mobile Arena in Las Vegas, Nevada on March 3rd. The event will see the welterweight title being defended, with Tyron Woodley returning to the Octagon to face number one contender Kamaru Usman.

The co-main event will see the highly anticipated debut of “Funky” Ben Askren, as he takes on former welterweight champion, Robbie Lawler. UFC recently announced yet another firecracker of a fight added to the card, with Chinese sensation Song Yadong taking on Alejandro Perez.

With the likes of Holly Holm, Cody Garbrandt and OSP also featuring on the card, UFC 235 is expected to be one of the biggest events of the year. Yadong (13-3-2), who signed with the UFC in 2017, is on a three-fight win streak, last beating Vince Morales at UFC Beijing.

His opponent, Alejandro Perez (21-6-1) hasn’t lost a fight since June 2015, and is also on a win streak, with six wins in his past seven fights. His fight with Albert Morales in September 2016 ended in a majority draw.

The two exciting bantamweights would look to make considerable inroads in the rankings, with a win furthering their cause. The other Chinese prospect on the card, Zhang Weili (18-1-0) will face the toughest competition of her career, taking on Tecia Torres (10-3-0) in a strawweight fight.