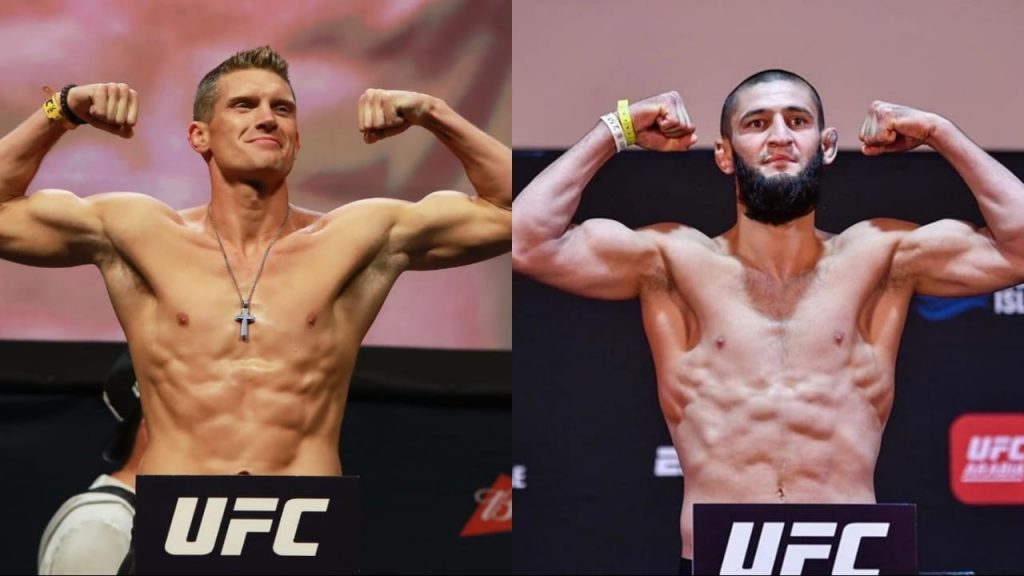 Former UFC title challenger Stephen Thompson is not too pleased with the special treatment fiery prospect Khamzat Chimaev is getting from the UFC.

Chimaev made his UFC debut in July this year at UFC Fight Island 1, submitting John Phillips via D’Arce choke in the second round after a dominant ground-and-pound display. Only ten days later, he viciously finished promotional newcomer Rhys McKee at UFC Fight Island 3 in the very first round. ‘Borz’ then faced his third challenge in Gerald Meerschaert seven weeks later at UFC Vegas 11, knocking him out in only 17 seconds.

His fighting ‘anyone, anytime, anywhere’ attitude earned him high praise from president Dana White, who said he has never seen anything like him.

“Slap In The Face”

Even though he has fought only once at 170lbs in the promotion, Chimaev has broken into the UFC welterweight rankings already, sitting comfortably at number 15. This does not sit well with Thompson, who told MMA Junkie that the special treatment the Russian born Swede is receiving from the organisation is a “slap in the face” to the fighters who have worked their way up.

“I think he was ranked number 15, which doesn’t make sense to me,” Thompson said. “I know he’s had one fight in the welterweight division, and his opponent (Rhys McKee) is 0-2 right now and normally a lightweight, a 155er. So it just doesn’t make sense how this guy can jump past everybody who’s worked their behinds off to get to where they’re at. And now he’s ranked number 15 fighting the number 3 guy, I believe. It’s just ridiculous to me.

Chimaev was scheduled to face Leon Edwards in the UFC Vegas 17 main event on December 19th, but the bout was postponed after ‘Rocky’ tested positive for the coronavirus. The fight is now set to take place in the main event of the UFC’s January 20th card on Fight Island. Thompson however, feels that the matchup is a ‘lose-lose’ situation for the Brit.

“For Leon Edwards, I don’t think it does anything,” Thompson said. “I think it’s a lose-lose for him. Even though Khamzat’s got a lot of hype around him, a good win, where does that put him? It doesn’t move him up any rank, maybe a title fight, which I think he deserves anyway. So, yeah, the welterweight division is a little crazy at this point.”

Khabib Nurmagomedov announced his retirement after successfully defending his title at UFC 254 against Justin Gaethje. Thompson believes that since Chimaev is from the same region as the UFC lightweight champion, the promotion is pushing him in order to fill the void that will be left by ‘The Eagle’.

“Guaranteed, he’s probably gonna get a title shot if he beats Leon Edwards, and I kinda called this,” Thompson said. “I was wondering why they were pushing Khamzat so hard, and I was like watch Khabib retire, because they’re from the same neck of the woods, they got to please that market, so it kinda makes sense why they’re pushing him so hard.”

With the Edwards vs Chimaev fight postponed until next month, Thompson’s welterweight clash with Geoff Neal is the new main event at UFC Vegas 17 next weekend.

Do you agree with Stephen Thompson that the UFC is unfairly pushing Khamzat Chimaev?