The Trials And Tribulations Of UFC 249 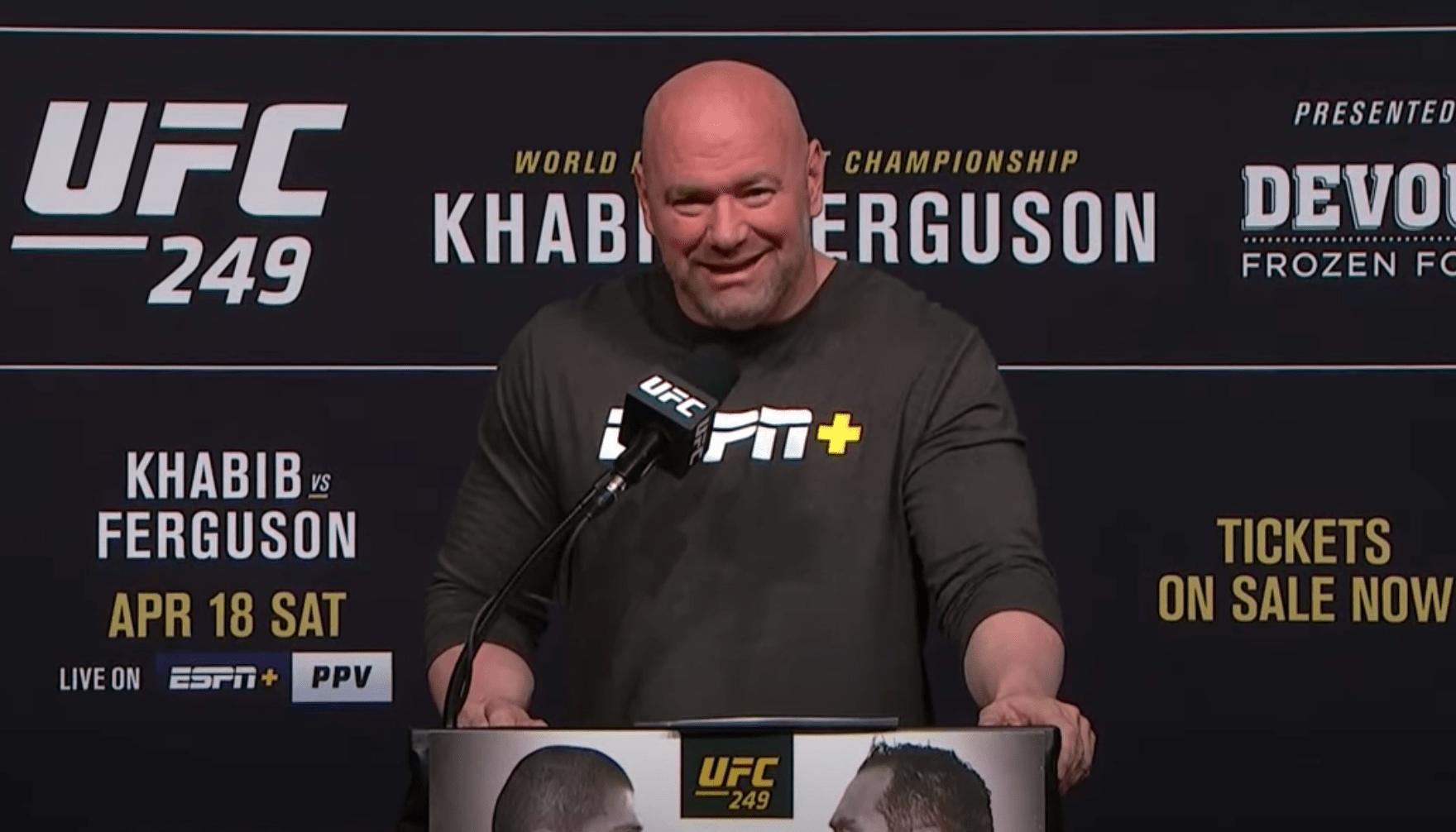 On November 30th 2019, Tony Ferguson signed his contract to fight Khabib Nurmagomedov, making the fight official. Once again, the whole MMA community was excited for one of the most eagerly anticipated fights in UFC history. Their fifth scheduled bout was booked for April 18th 2020, at UFC 249. However, after the coronavirus pandemic emerged, a chain of problems ensued for the organisation that no one could have foreseen in a hundred years.

The location of UFC 249 was initially planned for the Barclays Center in Brooklyn, New York. But as the world began to go into lockdown as a result of the coronavirus, causing sporting events around the world to be cancelled, it was announced that the card would need to find a new home.

Khabib was informed that it would be almost certainly be held in Abu Dhabi and so he flew there from California, where he was training at AKA. After he found out that he couldn’t leave the airport, he then flew home to Dagestan. Not long after being home, the UFC lightweight champion would learn that he couldn’t leave Russia because of the travel restrictions put in place. He was subsequently replaced by top lightweight contender, Justin Gaethje.

When UFC president Dana White named Gaethje as Khabib’s replacement, he confirmed that he had a new location for UFC 249 but said it would remain a secret. However, twelve days prior to the event, the name of the venue was leaked online. It would be the Tachi Palace Casino, located on an Indian reservation in California.

This is a Native American property, owned by the Tachi-Yokut Tribe, and known for hosting martial arts events. They are not under the direct jurisdiction of the California State Athletic Commission (CSAC), nor the state itself, which had already banned all events at that time.

Although the sovereignty of this Indian reservation might be brought into question with the Public Law 280, which enables the state to intervene in their civil matters under certain circumstances, at that moment is sounded like the UFC had most of their problems solved. Nevertheless, there were more problems lurking around the corner.

One of the questions being asked was about the logistics involved with the drug testing procedure going into the event. How to keep testing fighters during the pandemic? But that soon turned out to be one of the least troublesome aspects for the UFC, as USADA confirmed that they were willing to do everything in their power to continue with their testing for UFC 249.

However, a bigger issue emerged, after the Association of Ringside Physicians released a statement saying that they did not intend to support UFC 249 and that they felt that their doctors were more needed elsewhere:

“Sporting events across the world have been cancelled in response to the increased risk of infection and transmission by participants, fans, officials, and support staff. It is our recommendation that all combat sporting events be postponed until further notice. This includes any and all events, regardless of the number of people involved. Any combat sport taking place during this global pandemic places the athletes, officials, and anyone else involved in the event under unnecessary risk of infection and transmission of Covid-19. In addition, combat sports athletes often require medical attention after a bout, and we do not wish to see any additional strain on an already overwhelmed medical system.”

Every event must be regulated by a commission in order to have its fights considered professional, thus having their results added to official scores. Without a commission on board, fights at UFC 249 would be considered exhibition matches, as they are on ‘The Ultimate Fighter’.

Even though the Tachi Palace could theoretically bring any valid commission in the US to sanction the event, it seemed less and less likely that they would go against the CSAC and the governor, who had banned all events until the end of May, and made the following statement:

“The commission echoes the guidance of California Governor Gavin Newsom, the Department of Public Health, local health officials, and the recommendations of the Association of Ringside Physicians regarding the cancellation of events where people may be at risk of contracting Covid-19 and encourages the industry to do the same. The commission will not participate in the U.F.C. event on April 18, regardless of the event location.”

And they soon faced an even bigger problem. The Boxing Commissions and Combative Sports Association (ABC) issued a statement, stating that they would consider UFC 249 a non-sanctioned event, and possibly punish all officials who would decide to participate in it.

“The Association of Boxing Commission and Combative Sports (ABC) Board of Directors are very concern with an event being on tribal land without the regulation by a tribal/state athletic commission. The ABC concurs with the Association of Ringside Physicians that it’s a very trying time for the entire world. Fighter safety is paramount. If the fight occurs, it will be considered a non-sanctioned event since a state/tribal commission will not be present. All officials that decide to participate in the event, they may be sanctioned on a tribal/state level.”

The Financial Side of Things

The UFC is reportedly ‘required’ to do 42 shows this year, to be broadcast on ESPN. In the first three months of this year they have did seven, so in the remaining 38 weeks they will have to do 35 events. According to Brandon Ross of the Wall Street Journal, the UFC will earn $750 million if it makes the agreed-upon number of shows in 2020 and broadcasts them on ESPN.

“I’d be surprised if they can’t fulfil their contract,” Ross said. “Disney is paying UFC no matter what… all the UFC has to do is put the show on to get a minimum payment.”

John Nash of Bloody Elbow, explained this a bit further.

He estimated that the UFC could have earned more than $20 million from UFC 249 alone, no matter how many pay-per-views it would have sold.

Moreover, the money that the UFC could have made and the potential revenue they are loosing as the time passes, seems to be highly relevant to their parent company, as Endeavor is relying on the UFC’s cash flow to pay off their debts.

However, speaking to the NY Times, the president of Endeavor Mark Shapiro, said that there was no pressure on UFC to make the event happen.

“The U.F.C.’s contractual relationship with ESPN has absolutely nothing to do with this decision. ESPN has been clear about that.”

A Brief Moment of Resolution

Despite all these adversities, on April 9th, the ABC president Brian Dunn told MMA Fighting that UFC 249 will be held on April 18th, and that it would now be a sanctioned event.

“After speaking with UFC officials, the ABC board of directors determined this event could be listed as sanctioned,” he said. “When the UFC does international events, they regulate themselves using Nevada Athletic Commission inspectors, and this event on sovereign land is no different.”

He also dismissed some other problems that were previously raised.

“There will be no sanctions imposed by the ABC for any athletes or officials involved in the event,” Dunn said. “I was told that in addition to all usual medical testing requirements, they would screen everyone for COVID-19, have additional doctors and had made pre-arrangements with the nearest hospital to assure the immediate treatment of injured athletes.”

For a brief moment, it seemed like everything was solved and that the event was definitely going to go ahead as planned.

It seemed like Dana White was keeping the location a secret for as long as he possibly could, in order to avoid the involvement of political actors which he couldn’t go up against. However, once the location went public, that was the beginning of the end.

The renowned 86-year-old Senator and former Mayor of San Francisco, Dianne Feinstein, made an official press release, in which she mentioned several arguments why California should not support the event.

“I’m concerned by reports that Ultimate Fighting Championship plans to hold a pay-per-view event in California, in defiance of the state’s shelter-in-place order. This event would involve dozens of individuals flying to California and driving to a casino for a purpose no one can honestly claim is essential.

“I understand this event is scheduled to take place on tribal land and therefore is not subject to state law. However, at best this event ties up medical resources and sends a message that shelter-in-place orders can be flouted. At worst, participants and support staff could carry the virus back to their home communities and increase its spread.

“I call on Ultimate Fighting Championship and the Tachi-Yokut Tribe to reconsider this event and delay it until a later date. We have to be responsible and mindful of all local, state and federal public health guidelines. Going ahead with this event is not the right move.”

Shortly afterwards, the governor of California, Gavin Newsom, reacted as well. He contacted the head of Disney, a California-based company that owns ESPN, and told them in no uncertain terms, to cancel the event. This was of course when ESPN told Dana White to postpone UFC 249.

Dana respected the suggestion and acted accordingly. Speaking to ESPN, the UFC boss confirmed that he had postponed UFC 249.

“I told you this whole thing has been a battle since day one. We’ve been fighting non-stop all day and all night since this pandemic started to put on this event on April 18th. And today we got a call from the highest level you can go at Disney and the highest level of ESPN. One thing that I’ve said since we started our relationship and partnership with ESPN – and it’s been an incredible one, it’s been an amazing partnership. ESPN has been very, very good to us, and the powers that be there asked me to stand down and not do this event next Saturday.”

“ESPN has been in constant contact with the UFC regarding UFC 249. Nobody wants to see sports return more than we do, but we didn’t feel this was the right time for a variety of reasons. ESPN expressed its concerns to the UFC, and they understood.”

In the end, Dana White reassured everybody that while they have had to postpone their upcoming events, the infrastructure is currently being put in place on his Fight Island and that he expects to hold his first international fight card there in around one month’s time.