This Is How The MMA World Reacted To UFC Boston 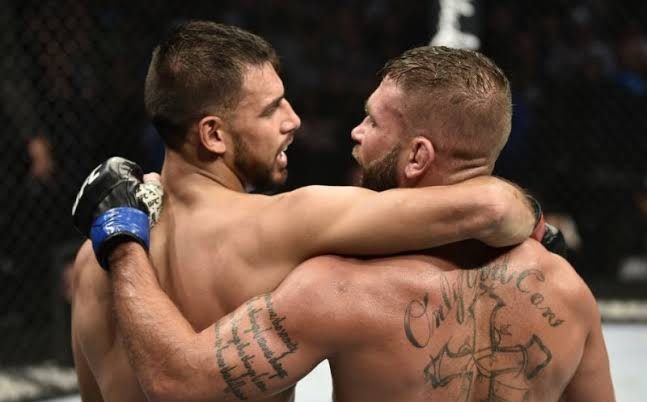 UFC Boston finished just some time ago, and it was yet another night of exciting fights with a dash of controversy. In the main event, Chris Weidman faced Dominick Reyes, and on his light heavyweight debut, the former middleweight champion couldn’t cope with Reyes’s power (Check out UFC Boston results here). Dominick Reyes stays undefeated, while Weidman suffered his fifth loss in six fights, and has only won one fight in four years.

The co-main event saw Yair Rodriguez and Jeremy Stephens bringing the heat as promised. While the first round was all ‘El Pantera’, Stephens rallied late in the fight, but it was too little, too late, as Yair picked up the unanimous decision win.

Maycee Barber also impressed yet again, securing a TKO win over Gillian Robertson. The 21-year-old now goes 8-0 in her professional MMA career, and looked very comfortable against a tough opponent. Barber overwhelmed Robertson before landing an elbow, and finishing Gillian in the first round.

Joe Lauzon too rallied as the Boston crowd got behind him, and finished Jonathan Pearce inside two minutes of the first round.

As expected, the pros took to social media to react to a crazy night of fights.

With the win over Chris Weidman, Dominick Reyes will now likely face Jon Jones next for the light heavyweight title.

Meanwhile, after her win over Robertson, Barber called out Paige VanZant for a fight.

There was also some controversy, as Greg Hardy was spotted using an inhaler in between rounds. While he was initially awarded the unanimous decision win against Ben Sosoli, it was later changed to a no contest. And here is how the pros reacted to it.