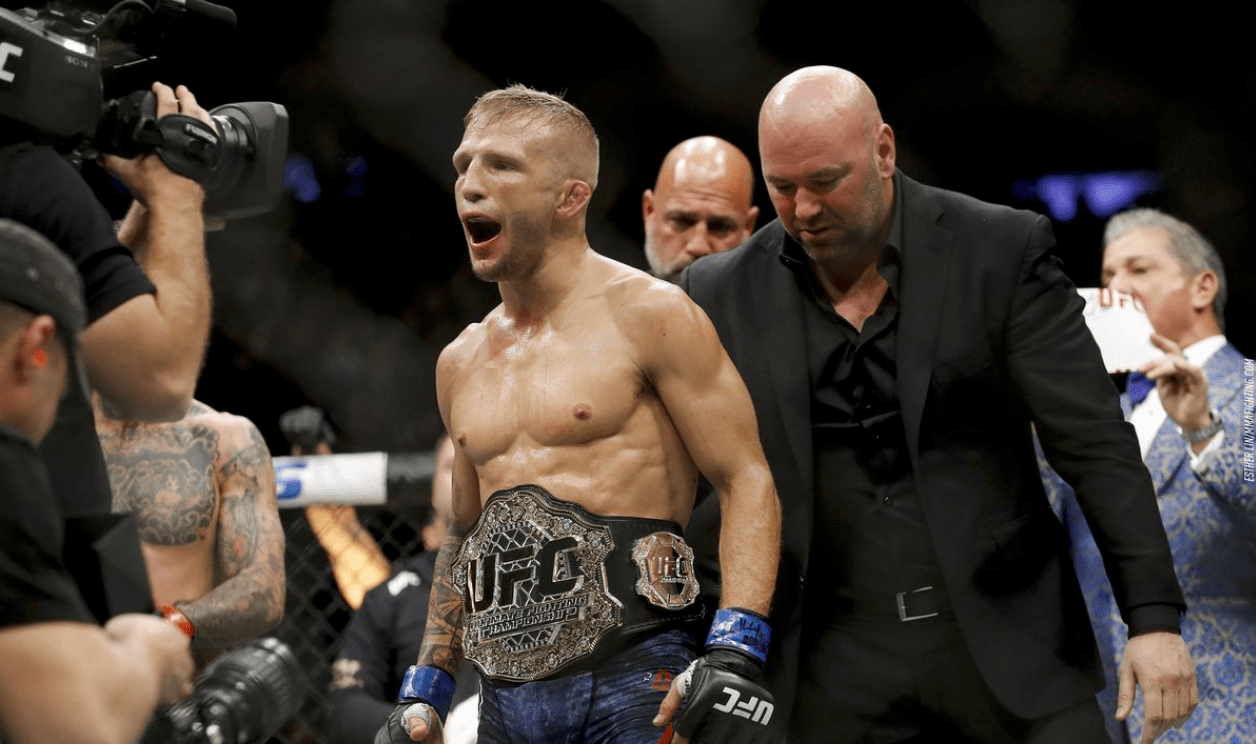 TJ Dillashaw is one of the most experienced fighters to have ever competed in the UFC’s bantamweight division. He has captured the 135lb belt twice and made multiple title defences during his nine year stint in the promotion so far.

Within those years, he has fought, and lost to Henry Cejudo and Dominick Cruz, which puts him in a unique position to speak about the UFC 249 co-main event. In an interview with ESPN (as transcribed by MMA Mania), Dillashaw revealed that he believes ‘Triple C’s’ abilities are overrated and predicts that ‘The Dominator’ will get the victory.

“I actually think Cruz wins the fight, I think he wins a decision”

I don’t think Cejudo is all he cracks himself up to be. He’s very good, don’t get me wrong. He’s a great athlete, he’s done some amazing things in the combat world. But I don’t think he’s to the level of what Cruz can show him. It’s gonna be difficult for Cejudo to deal with Cruz’s awkward movement.”

Dillashaw lost to Henry Cejudo in January 2019 at UFC Brooklyn when he dropped down a division to challenge for the flyweight title. At the time, he was the current bantamweight champion and was launching a bid to become one of the growing number of two division champions on the roster.

Unfortunately for Dillashaw, his career came to a grinding halt, when USADA handed him a two year suspension for the use of recombinant human erythropoietin (EPO). The conviction meant that he was stripped of the bantamweight belt and can not compete again until the start of 2021.

Dillashaw went on to play down the importance of Cejudo’s Olympic wrestling skills in an MMA fight.

“I think MMA wrestling is a completely different sport. I think the distance control that Cruz has is going to be one of Cejudo’s biggest challenges. He’s not gonna be able to get a hold of Cruz. If he does, he isn’t gonna be able to hold him down. It’s not like Cejudo is a jiu-jitsu expert where he’s gonna take advantage of Cruz giving him his back. Because Cruz gives up his back constantly when he gets taken down, but he uses it to get back to his feet. I think Cruz’s scrambling ability and his MMA wrestling will be an advantage for him, too.”

Cruz replaced Jose Aldo after the Brazilian was ruled out of the fight last month due to visa issues. Cejudo has predicted a swift knockout of ‘The Dominator’ this weekend and joked that he would even ‘marry’ Aldo to fight him when the dust has settled on UFC 249.

While Dillashaw is backing the former champion to get the win, Cejudo goes into UFC 249 as a -240 favourite to reclaim his title against the +190 Cruz.

Do you agree with TJ Dillashaw’s assessment of this weekend’s co-main event between Henry Cejudo and Dominick Cruz?