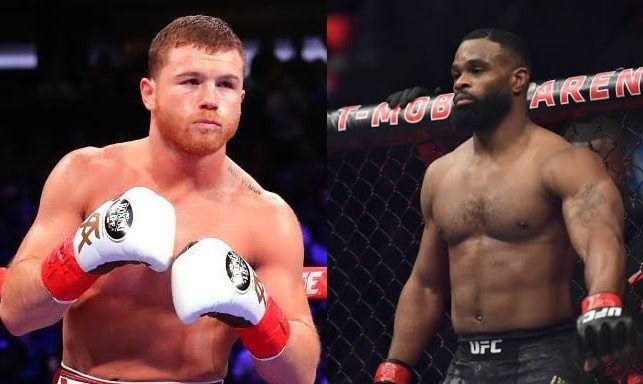 Former UFC welterweight champion Tyron Woodley has called out Canelo Alvarez for a boxing match. Over the past two years — based off on the success of McGregor vs. Mayweather, MMA fighters have been calling out professional boxers for cross-promotional fights.

It isn’t something new either, although Conor and Floyd Jr. somehow made it happen, which also became a phenomenal success. And now Tyron Woodley, who hasn’t fought inside the Octagon since losing his welterweight title wants a showdown with one of the best pound-for-pound boxers on the planet, Canelo.

‘T-Wood’ had earlier told TMZ he would drop Alvarez.

“I want Canelo”, Woodley said at the time (h/t BJPenn.com). “No. 1, I’m not going to sit there and try to win 12 rounds, let’s be real. His defense is crazy. He slips an uppercut. Who slips an uppercut? He makes you look real stupid. I’m throwing all unorthodox. I’m coming, I’m trying to knock him out. If I land, he’s going down, let’s not even play. If don’t manner how many boxing fights you got, how many MMA fights. If I hit Canelo with everything on the punch, it’s a wrap.”

“The Chosen One” recently took to Twitter, to once again call out Canelo.

“Let’s get it!” Woodley wrote in a tweet directed to Alvarez. “If I touch you you going down. #Facts I’m about to shock the world!”

Woodley was scheduled to fight Robbie Lawler back in June, but had to withdraw due to a hand injury. Canelo Alvarez meanwhile will be in action in November in a super-fight against Sergey Kovalev, inside Madison Square Garden in New York.

Woodley has also expressed his interest in fighting Khabib Nurmagomedov in the near future.