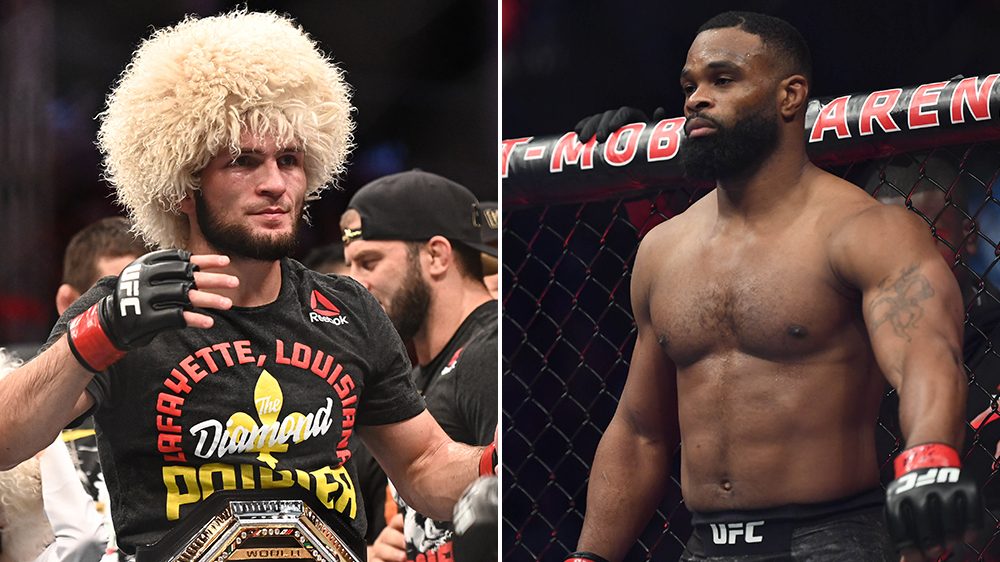 Tyron Woodley, in the recent past has called out people like Georges St-Pierre and Conor McGregor, but his recent willingness to fight Khabib Nurmagomedov has surprised everyone. On his Hollywood Beatdown show, Woodley said he’d like to fight Khabib, after the Dagestani grappler soundly defeated Woodley’s teammate, Dustin Poirier at UFC 242.

The former UFC Welterweight Champion was present for the fighter Q n’ As last week before UFC Vancouver, and was once again asked to elaborate on his call out.

“He’s a beast”, Tyron Woodley said (transcript via MMA Fighting). “I just think that right now in my life and my career, I need the impossible. I need the stuff that nobody can do, I need the thing that’s gonna motivate me beyond measure and I think that he provides that.

“Obviously, I could never make 155. I’m already kind of alluding to handling business at welterweight and going up to middleweight. It would have to be something at a catchweight, it would have to be something that he would be interested in. He’s on top of the world right now, I might not even be an option for him. It’s more out of respect of what he can do. I know Dustin, he spars middleweights, light heavyweights, and for him to go out there and put on a performance like that against Dustin, I gotta see what it feels like.”

Tyron Woodley had previously lobbied to fight GSP, and while the Canadian legend did come out of retirement for one fight, it was against Michael Bisping. Tyron spoke about wanting to cement his legacy as one of the greats in the sport, and said he wants to prove that he is one of the best in the business.

“And I’ve always wanted to prove that. Not to you guys, but to myself because he was the king of the throne for a very long time. You can’t ever walk around and say you the greatest that ever did it knowing that this guy’s living, willing, able and competitive enough to still compete. So that’s why I was pushing for that fight. Not so much for the money, I’m going to make money anyway. But so much more for myself, that I can prove that I am the greatest welterweight that’s ever walked around. Once I recognized that we were never gonna fight, then I said why not us train? I’m going to get the same motivation, but now instead of 25 minutes, I can share weeks, hours, months, on picking his brain, swapping techniques, and now my legacy is based on who I beat, how I beat them, how long I reigned at the top, and that’s going to be my argument why I’m the greatest of all-time.”