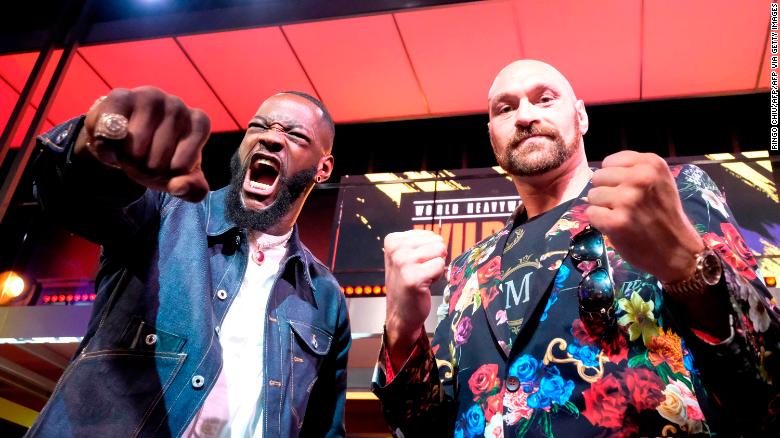 Tyson Fury has reacted with confusion and concern over Deontay Wilder’s latest claims to why he lost in their second bout.

Wilder failed to defend his WBC heavyweight championship in their rematch, after the beating he suffered from Fury for seven rounds resulted in his corner throwing in the towel. Since then, ‘The Bronze Bomber’ has continuously made head scratching remarks as to why he lost the fight.

A rematch clause for the two men to participate in a third bout was in the works until the date expired, and Fury was forced to move on. Something he referred to while speaking to Gareth A. Davies (transcribed by The Mac Life).

“I agreed to every date they said. Every date that was mentioned, I agreed to. It’s not worth me looking at it now. It’s over. Deontay Wilder has tried to bring my character down with the bulls*** he’s said. If I was like the rest of the world, I’d probably sue him for defamation of character for about a hundred million. But considering I’m not, I’m not really interested in doing that type of thing. He’ll never get a shot at me now. Finished. For what he’s said — Losing is one thing. Everybody can lose to a better man on the night, but to come out with the amount of BS that he’s come out with over the last eight months. He’s conveniently waited until the contract expired before he’s opened his mouth. It’s ridiculous and I don’t really want to give him any air time. That’s it for the ‘Bronze Bomber’.”

Is Wilder’s Career over?

On the topic of Wilder’s excuses for losing the match, Fury could only offer bewilderment and genuine concern over the 35-year-old’s mental health.

“I think he’s lost his marbles,” Fury said. “First of all it was the suit, then it was the bicep injury, then his trainer was on our team, then the referee was against him, then I had weights in my gloves, now someone’s spiked his water. It’s one of those things. It definitely is defamation of character. For sure. It is what it is. I’m quite concerned for his mental well being, to be fair, rather than his boxing career. That’s gone.

“Some people can’t take loss. Imagine being undefeated for 12 years as a professional, ten [title] defences, and you were told you could beat this guy and he’s come back after three years out of the ring, ballooning up in weight, and given you a boxing lesson? And then absolutely annihilated you in the rematch. So, would I be the same? No, I’d say right, I lost to a better man, fair play. AJ got beat by Ruiz and he didn’t make a million excuses. He just said ‘fantastic, well done’. Suppose it’s different sportsmans for different places. It’s up to him what he wants to do.”

Wilder’s loss to Fury in their rematch at the start of the year was the first time he had lost in his professional career, having gone into the fight with a record of 42-0-1. 41 of his wins have come by way of knockout.

His cornerman who threw in the towel was Mark Breland. As well as accusing him of spiking his water earlier this month, Wilder previously removed him from his team.

Breland has also responded to Wilder’s recent claims. Taking to social media, he hit back at the former champion.

Is Tyson Fury right to be concerned about Deontay Wilder’s mental well being?