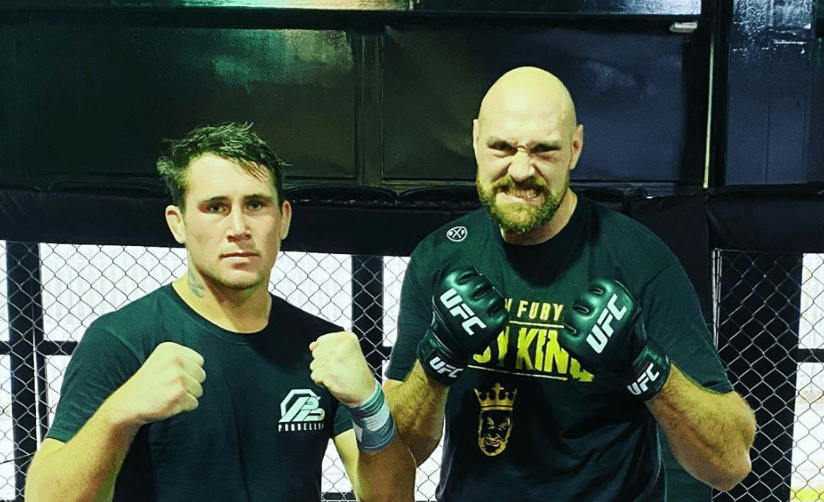 Two-time boxing heavyweight world champion Tyson Fury has been teasing fight fans about transitioning to MMA since the end of 2019. He even trained with UFC middleweight Darren Till, and had talks with the MMA superstar Conor McGregor, who has invited him to his home city of Dublin to train with him.

Talking with Kugan Cassius during his Instagram Live (as transcribed by MMA Junkie), Fury explained that he still wants to fight somebody in the UFC, but not before he handles a few more adversaries in the world of boxing.

“I’ve had plenty of conversations with Dana White about potentially having a fight with one of the guys. But at the minute, I don’t need to fight UFC guys,” Fury said. “I need to clear up some of my own stuff [in boxing]. There’s a few guys that need to be fought in this era. I need to fight Wilder again. I’ve got to fight Joshua. I need to fight Dillian Whyte.

“I’ll fight anyone. And there’s a lot coming up, too, like Joe Joyce, Daniel Dubois and Tony Yoka. A lot of fresh meat to beat on. There’s even fights like Luis Ortiz, whoever.”

The ‘Gypsy King’ mentioned some other boxing heavyweights who he might end up fighting before he decides to take on someone from the UFC roster.

“There’s so many heavyweights today. Efe Ajagba, the Nigerian. He looks pretty good, big tall kid. Filip Hrgovic, he looks amazing, too,” Fury said. “Oleksandr Usyk. Derek Chisora, he’s in the mix. There’s so many good heavyweights out there to be fought and fights to give the fans.

“Until then, I don’t need a fight with Francis Ngannou. I don’t need Stipe Miocic, Brock Lesnar, whoever. I don’t need these guys to fight in a crossover match right now. When I’m finished what I’m doing in my own career, we can look at something like that.”

Dana White has said a few times that he is open to welcoming Fury into the UFC, after initially having doubts.

Fury is expected to fight Deontay Wilder after the coronavirus pandemic gets under control. Then should he come out victorious again, and Anthony Joshua beats Kubrat Pulev in his mandatory defence, it will set up a mouth watering, all British unification bout between the two heavyweights.

How do you think Tyson Fury would fare in MMA?