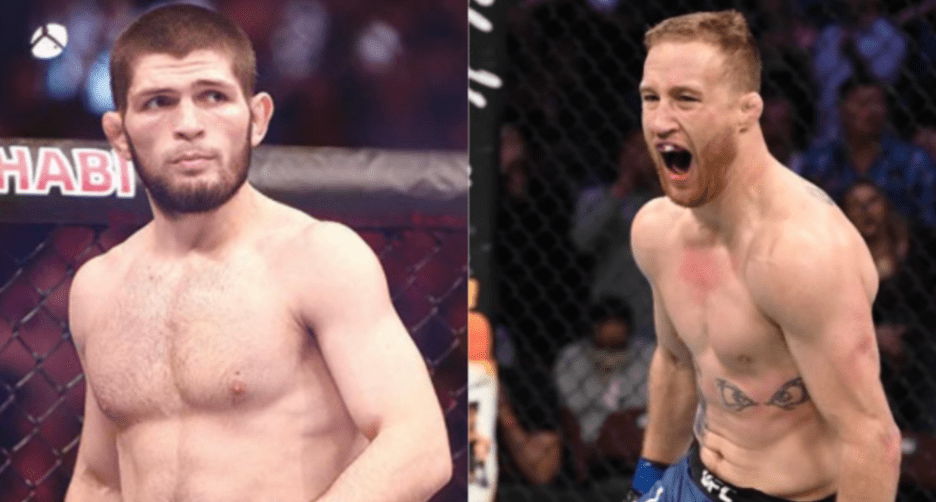 UFC interim lightweight champion Justin Gaethje, is set to face Khabib Nurmagomedov for the undisputed title at UFC 254 on October 24th on Fight Island. Also flying out to Yas Island in Abu Dhabi will be new UFC signing Michael Chandler, who will serve as a backup for the main event.

With Gaethje’s wrestling pedigree and knockout power, many believe he will pose as Khabib’s toughest test to date. The 31-year-old is coming off an impressive fifth-round TKO victory over Tony Ferguson at UFC 249. While the undefeated champion hasn’t fought since UFC 242, where he defeated Dustin Poirier.

Speaking to ESPN (as transcribed by MMA Junkie), Chandler assessed Gaethje’s chances against Khabib in the UFC 254 main event.

“He Poses The Best Threat”

“Now, you take into consideration that Justin Gaethje was a Division-I wrestler, you take into consideration that we haven’t seen his wrestling, but know he’s got great athleticism, great hips, great instincts inside the cage – I think he poses the best threat that we’ve seen thus far against a guy like Khabib. But I still think you’re crazy if you do bet against Khabib.”

While ‘The Highlight’ is riding a four-fight winning streak, all of which have come by knockout, Chandler believes that Khabib will be in Gaethje’s face from the start to finish with his usual relentless pressure.

“You’re crazy if you bet against him not being able to take Justin down,” the 34 year old said. “You’re crazy if you think Justin is going to be able to go in there and land combinations at will like he was Tony Ferguson. The reason I like the Tony Ferguson fight is, he’s a standing target. He’s a stationary target. He takes punches in order to give punches later on down the line.

“Khabib’s not that guy,” Chandler continued. “Khabib is going to be in Justin’s face. We haven’t seen Justin back up a lot. I think Justin is going to be fighting on his heels a lot, which is never something we’ve seen him able to do. His leg kicks won’t be as effective on his heels. His power punches, his hooks, aren’t going to be as effective on his heels. And I think we’re still going to see, I won’t say dominant victory by Khabib, but I think we’re going to see a lot of the same Khabib-esque type of fight, just in a less dominant fashion.”

What do you think of Michael Chandler’s assessment of the UFC 254 main event between Khabib Nurmagomedov and Justin Gaethje?