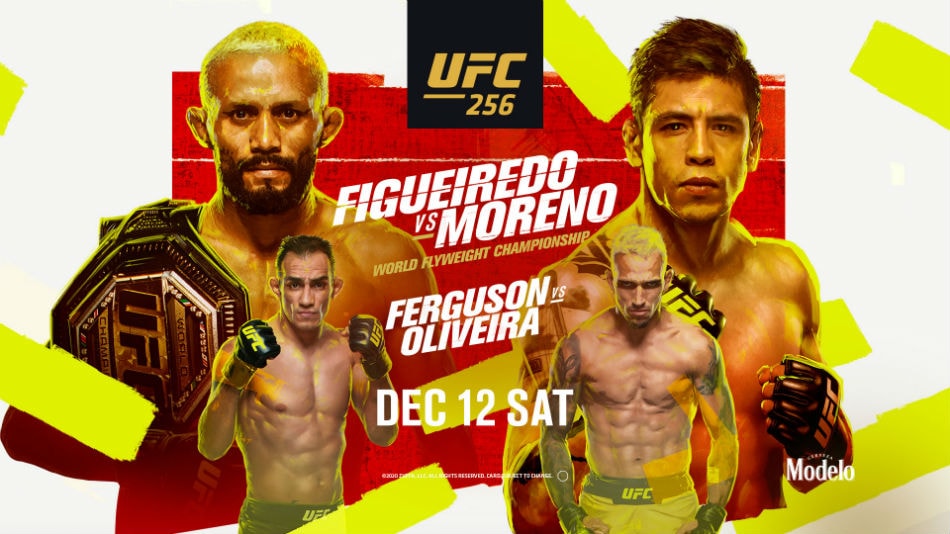 UFC 256 goes down Saturday night at the APEX Center in Las Vegas, Nevada. The UFC‘s last pay-per-view event of the year has seen three title fights fall through. Kamaru Usman was booked to defend his welterweight title against Gilbert Burns, but announced that he wasn’t going to be ready in time. Amanda Nunes was scheduled to defend her featherweight title against Megan Anderson, but the Brazilian pulled out due to personal issues. And Petr Yan was set to make the first defence of his bantamweight title against Aljamain Sterling, but he also pulled out as a result of personal issues.

All three title bouts are expected to be rescheduled in early 2021. The UFC 256 main card will now see Deiveson Figueiredo defend his flyweight title for the second time in three weeks against Brandon Moreno. The Brazilian defended his belt against Alex Perez at UFC 255, the Mexican also fought on the same card, beating Brandon Royval.

In the UFC 256 co-main event, Tony Ferguson returns against Charles Oliveira. ‘El Cucuy’ will look to rebound from his loss to Justin Gaethje at UFC 249, which ended his twelve fight winning streak. On the other hand, ‘Do Bronx’ is on a seven fight win streak, with all seven wins coming via stoppage.

The UFC returns next weekend with UFC Vegas 17, which will feature Stephen Thompson vs Geoff Neal in the main event.