UFC 259: Aljamain Sterling Hits Back At His Critics 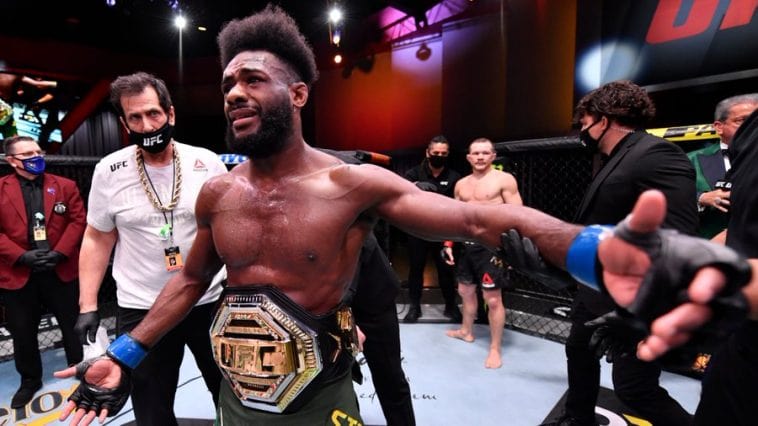 Aljamain Sterling has clapped back at his critics who claim he wasn’t as hurt as he made out after taking Petr Yan’s intentional illegal knee at UFC 259.

Sterling has been subjected to a lot of online criticism since his fight with Yan, which was stopped in the fourth round after the Russian was disqualified for landing an illegal knee to his face while he was grounded. The fight was stopped after a prolonged discussion between referee Mark Smith and the cageside doctor, and ‘Funk Master’ was eventually awarded the win and the bantamweight title.

The 31 year old however, threw the belt onto the canvas immediately after Dana White wrapped it around his waist during Bruce Buffer’s official announcement. Speaking on his ‘The Weekly Scraps’ podcast (as transcribed by MMA Junkie), Sterling said that although he is technically the champion now, it’s still bittersweet.

Thoughts During The Sequence Of Events

After he got rocked with the knee, Sterling appeared out of sorts as he laid clutching his face on the canvas. However, the New York native has revealed that there was a lot that was going on in his head during that sequence of events.

“I do remember asking, ‘How much time do I have?’ Because I wanted to continue,” Sterling noted. “In this moment, I’m thinking a whole bunch of things in my head: Dana’s not going to give me another shot at the title, the fight’s going to be a no contest, Dana’s going to say, ‘He was losing that fight in the fourth round, so why should we use him again? We already know the direction the fight was heading, so we’re going to move on from this.’ Then me, I’m never going to get the opportunity again. I’m going to have to win three or four more fights to get back in this position for a world title again.”

While he initially threw the belt away, Sterling later uploaded pictures of him posing with it later on social media, raising a number of questions. The newly-crowned champion explained the reason behind his ‘celebrations’.

“Those thoughts are going through my head. Not, ‘I’m going to become world champion.’ This, I didn’t even think I was getting this. I didn’t even want this,” Sterling revealed. “Then all my friends and family see me. They knew I had this. They took it out of the bag for me. Put it on my shoulder and wanted me to be proud of my performance and how I carried myself. They all knew it wasn’t the way I wanted to win, but they said I’m still the champ. I did this. It’s hard to get in this position anyway to fight for a world title.”

‘You Are The Actors’

Sterling also hit back his fellow fighters who openly accused him of playacting, which included TJ Dillashaw, Darren Till, and Cody Garbrandt.

“For the fighters that said I milked it, good for you guys,” Sterling said. “Do you guys ever see me quit or look for a way out? Where a guy puts on a half-assed rear-naked choke, and it’s half on, and you look around and go, ‘OK, I can tap now. … I can quit now.’ You guys are the freaking softies. I fought my ass off the entire time, and I was not going to quit in that fight. I was going to take my licking or find a way to persevere or find a way to win like a man because that’s just what I do. I don’t have that quit in me. There’s no quit button whenever I’m in there. You guys might find it easy and talk about the Oscars and everything. You guys are the actors, and it might be a reflection or your own spirits.”

What do you make of Aljamain Sterling’s comments on his controversial disqualification win over Petr Yan at UFC 259?