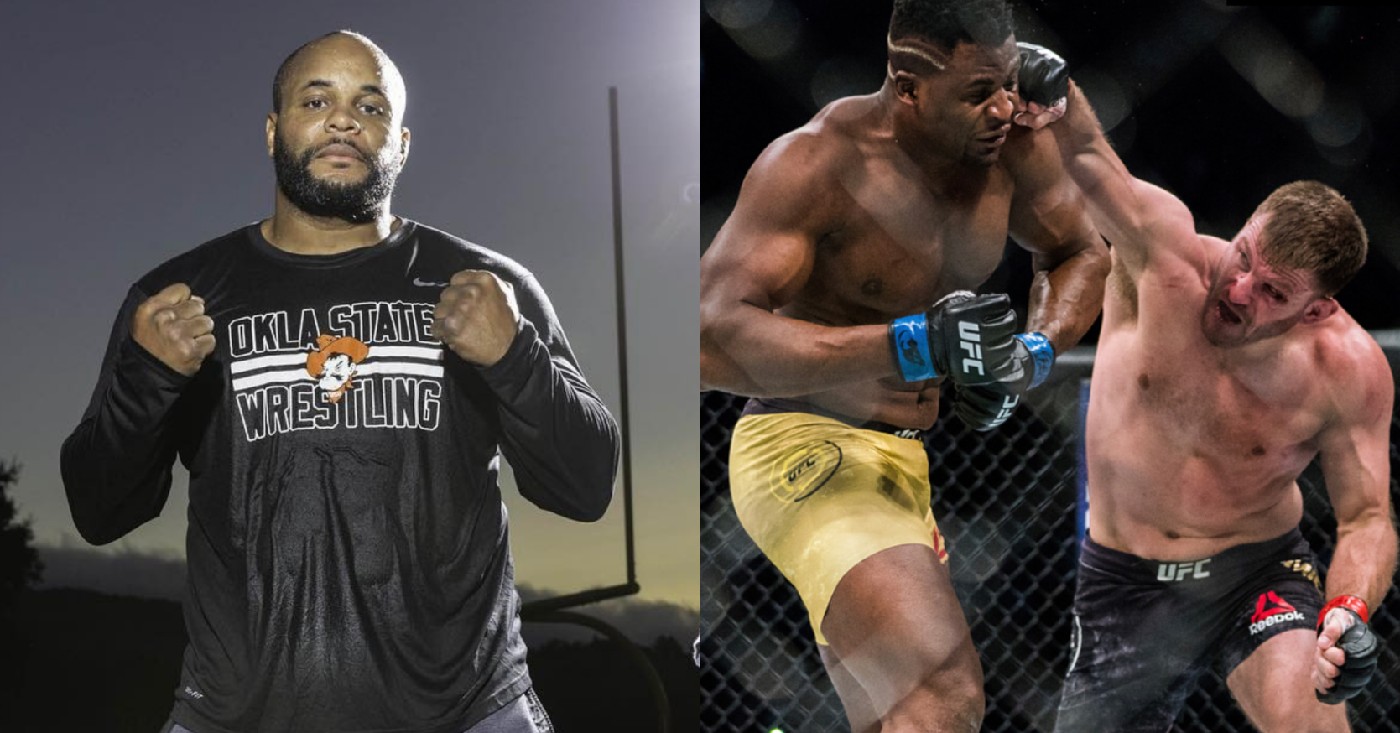 Daniel Cormier has given his thoughts on this weekend’s UFC 260 main event heavyweight title rematch between Stipe Miocic and Francis Ngannou.

Miocic successfully defended his belt the first time they fought at UFC 220 by beating Ngannou via a lopsided unanimous decision. ‘The Predator’ feels however that he’s better prepared this time around.

There’s another small factor to take into consideration in the rematch, as it will take place in the 25-foot UFC APEX Octagon instead of the usual 30-foot cage. Cormier believes that this could work out advantageous for Ngannou.

“How Long Can Stipe Survive”

Speaking to the media after the UFC 260 weigh-ins (as transcribed by The Mac Life), Cormier said that the key to victory for Miocic is to survive any early onslaught from Ngannou, to allow him time to start imposing himself in the fight.

“I honestly believe it plays to Francis’ benefit a little bit,” Cormier said. “Early. It’s a tale of two fights, man. Six minutes where the dangers extremely high. The danger is as daunting as anything you can ever think of. It’s like being locked in the cage with a tiger. How long can you survive? That’s what you have to do when you fight Francis. How long can Stipe survive to start imposing himself into the fight.

“Early, this small Octagon plays to Francis. Because when he starts to go downhill, terrifying sight. You saw it against Jairzinho Rozenstruik. It started off a bit slow, Francis made up his mind that he was just going to go, and when he did the fight was over five seconds later. There’s just not that much room to run as a smaller guy.”

Stick To Your Guns

Having made the mistake of rushing in the last time around, Ngannou promises to be more calculated at UFC 260. Cormier however, thinks that the 34 year old would be better off doing what he does best, which is throwing the kitchen sink at his opponent.

“He has an atom bomb, right? He has the power,” Cormier said. “What would make Francis question if he could knock out a man? … Why would you not think that you can knock out Stipe? The reality is fight one, for Francis, is the anomaly. The norm is what happens to most people. Let’s see if he can find a way to stay within himself. I don’t think he can, and honestly I don’t think he should. I think he should try to blitz Stipe and really try to take him out of there. Because I don’t know he wins a fight over 25 minutes.”

Daniel Cormier knows all about facing Miocic, having faced the current champion three times in the last three years. ‘DC’ announced his retirement from the sport after losing their rubber match at UFC 252.

Who do you think leaves the Octagon as the UFC heavyweight champion at UFC 260, Stipe Miocic or Francis Ngannou?