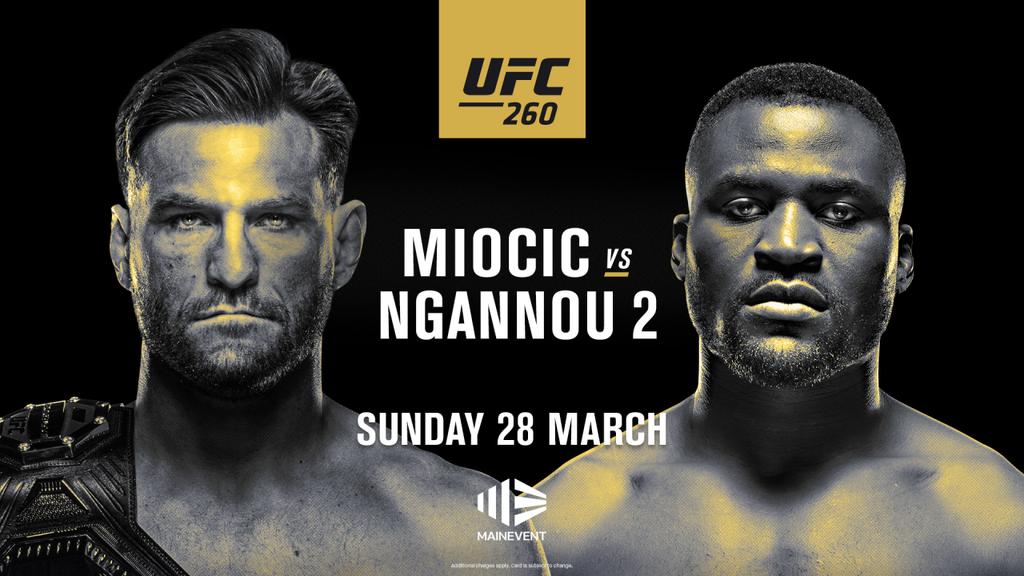 UFC 260 goes down on Saturday night at the APEX Center in Las Vegas. In the main event, Stipe Miocic once again defends his heavyweight title against Francis Ngannou.

Miocic won their first encounter three years ago at UFC 220. The Cleveland native used his superior wrestling to dominate Ngannou for five rounds to successfully defend his title for the third time, breaking the promotion’s record for most title defences in the heavyweight division. He would however, go on to lose the title in his next fight to Daniel Cormier, before winning the rematch and then the trilogy.

While Miocic has only fought Cormier three times since beating Ngannou, ‘The Predator’ has fought five times, winning his last four all by way of first round knockout.

In the UFC 260 co-main event, former welterweight champion Tyron Woodley will look to get back to winning ways against Vicente Luque. ‘The Chosen One’ is coming off three straight losses to Kamaru Usman, Gilbert Burns, and Colby Covington. ‘The Silent Assassin’ on the other hand, is coming off back-to-back wins against Niko Price and most recently against Randy Brown at UFC Vegas 5.

This Is How The MMA World Reacted To UFC 260:

The UFC returns in two weeks with UFC Vegas 23, which will feature a top six middleweight clash between Darren Till and Marvin Vettori in the main event.